From 2016 to 2020, sales of plant based cheese surged at a CAGR of 9%. Increased adoption of vegan lifestyles amid mounting animal welfare and environmental concerns are responsible for propelling the market forward in the past half-a-decade.

Furthermore, shifting customer tastes for low fat, low sugar, and lactose-free goods are paving the way for plant based products such as plant based cheese, raising plant based products demand. During the COVID-19 pandemic, consumption further increased, as consumers began embracing more naturally sourced foods over animal derived ones.

Lactose intolerance and milk allergy are also factors in the rise of ‘vegan' lifestyles. Several regulatory agencies strongly advise consumers to use plant based cheese. For example, the United States Food and Drug Administration (FDA) has created plans to bring advances in plant based cheese production and other plant based foods. Based on aforementioned trends, demand for plant based cheese is likely to surge 4x from 2021 to 2031.

Diabetes, heart disease, obesity, and other health issues are on the rise, and show no indications of abating. Obesity in the United States reached 39% in 2011, according to the National Center for Biotechnology Information (NCBI), and it is growing at a rate of 5% every year.

Diabetes has been highlighted as a major cause of blindness, heart attacks, renal failure, lower limb amputation, and other health problems by the World Health Organization (WHO). This has prompted an increasing number of customers to switch to a plant based diet.

Plant based cheese has numerous health benefits, including reduced blood sugar levels, increased insulin sensitivity, a lower chance of developing type 2 diabetes, and others. Furthermore, plant based cheese is highly recommended for those who are allergic to dairy-based goods. As a result of these factors, the market is expected to grow at an exponential CAGR over the forecast period.

Growing emphasis on environmentally friendly food products has fueled the expansion of the plant based cheese sector. The dairy farm provides more than 90% of the greenhouse gas (CHG) emissions effect for cheese, according to the United Kingdom International Diabetes Federation (UKIDF). Plant based cheese is environmentally sustainable and hence popular among an increasing number of individuals.

Dairy systems, according to the European Commission (EC), have a number of severe environmental consequences, including the deterioration of hydro-geological systems, the loss of grassland diversity, compromised soil integrity, and others. As more individuals become worried about the negative effects of dairy systems, they are opting for plant based alternatives to safeguard the environment. This has resulted in a huge increase in the demand for plant based cheese.

What is the Demand Outlook for Plant based Cheese Market in the U.S.?

When it comes to plant based cheese production on a worldwide scale, U.S. has the highest demand. North America, headed by the United States and Canada, gained a market share of more than 30% in 2020. The U.S market is set to expand at a CAGR of over 10% until 2031.

Retail sales of plant based milk opened the door for rising acceptance of plant based cheese in U.S. Furthermore, demand for milk-free cheese is particularly high among customers seeking health and nutritional benefits. The country has sophisticated manufacturing capabilities, which are supported by the presence of a mature market.

Why the U.K. is considered a Lucrative Plant based Cheese Market?

Plant based cheese sales in the U.K have grown by 165% in the previous two years. With the second-largest market share, Europe will lead the market growth and has a strong chance of maintaining its position in the next years. The rising vegan population in Europe is contributing substantially to the expansion of the European plant based cheese business.

According to European National Statistics, the acceptance of "veganism" in Europe has grown sevenfold between 2014 and 2019. Furthermore, numerous unfavorable aspects of the dairy systems have contributed to an increase in veganism. Mastitis, a bacterial illness in the udder, affects 30% of dairy cows in the United Kingdom. A CAGR worth 12% is expected for the U.K market.

Why China is the Fastest Growing Plant based Cheese Market?

China has emerged as a highly profitable market for plant based cheese, with exponential growth expected in the next years. The abundant availability of a diverse variety of sources, such as oat milk source, corn milk source, and others, is contributing to its continuous development. 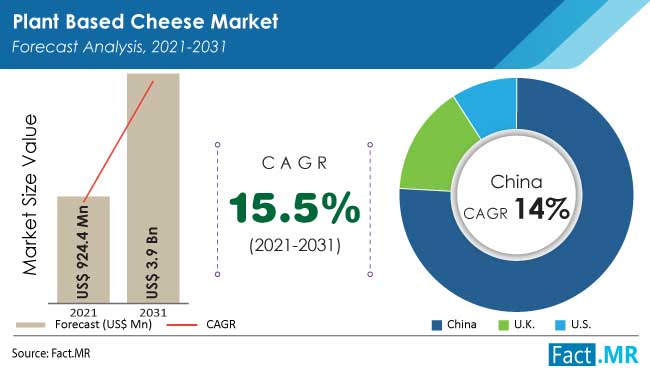 Will Soy Cheese Emerge as the Dominant Product Category?

According to Fact.MR, soy sourced cheese is anticipated to account for the largest market share, capturing a market share of 40%. Soy cheese comes in hard and soft varieties, as well as tastes like cheddar cheese, mozzarella cheese, and Monterey jack. Soy cheese is chosen above other sources because it has a high concentration of vital fatty acids.

It is also high in proteins, fiber, iron, potassium, and bioactive components. Soy protein consumption may reduce the risk of heart disease. According to the U.S Food and Drug Administration, including soy protein in one's regular diet helps to lower total and low density lipoprotein cholesterol.

HoReCa to Emerge as the Fastest Growing End User of Plant Based Cheese?

Based on buyer type, plant based cheese sales across the HoReCa segment is expected to grow the fastest. Rapid growth of the foodservices industry in the past few years is attributed as the primary growth driver for the segment.

The market for plant based cheese is likely to register a CAGR of 15.5% until 2031

By 2031, plant based cheese value is forecast to reach US$ 3.9 Bn, according to Fact.MR

The market for plant based cheese is anticipated to grow at a CAGR of 10% across the U.K

China is likely to be the fastest growing market for plant based cheese, registering a CAGR of 13%

Soy based plant cheese is the most preferred, capturing a revenue share of 40%

HoReCa will emerge as the fastest growing segment in terms of buyer type, experiencing a CAGR worth 13%