Technological advancements in packaging have led to heightened demand for convenience foods such as prepared mixes, shelf-stable, chilled, frozen and others. Processed food or convenient foods are commercially prepared foods that require minimal or no further preparation in order to be consumed.

Asia-Pacific excluding Japan will witness the fastest growth in the regional plant hydrocolloids market during the projected period owing to the rising demand for processed and convenient food items in the region.

In acidified UHT (Ultra-high temperature processing) soy beverages, pectin is used for stabilizing soy protein at a considerably low pH during the process. However, proteins do not remain stable during low pH heat treatment.

Due to increase in the consumer demand along with strong non-vegan demographics, the Brazilian market for plant hydrocolloids is anticipated to grow exponentially in the following years.

The manufacturers of Latin America are stepping up their efforts in producing and selling plant-based products in order to meet the rising demand of consumers for plant-based alternatives.

Nutrition is also considered as a major pre-requisite of consumers owing to the fact that products earlier were relatively high in carbs.

Owing to primary factors such as challenges of navigating the supply chain of Brazil and high import costs, most of the leading brands holding plant hydrocolloids substances are domestic.

The trend is expected to change with retailers increasing efforts in associating directly with overseas suppliers.

Asia Pacific to Emerge as Pocket of Profitable Growth

Changing food habits of consumers is fueling the plant hydrocolloids market in developing countries such as China and India. Asia-Pacific will witness the fastest regional market growth during the projected period owing to the rising demand for processed and convenient food items in the region.

Cheese spreads is dominating the plant hydrocolloids market for cheese in the Middle-East and Africa region. However, food service areas in the region continue to produce and sell canned and sliced cheese which is observed to be in demand. Yemen and Iraq are likely to witness growing opportunities for plant hydrocolloids as developing markets. 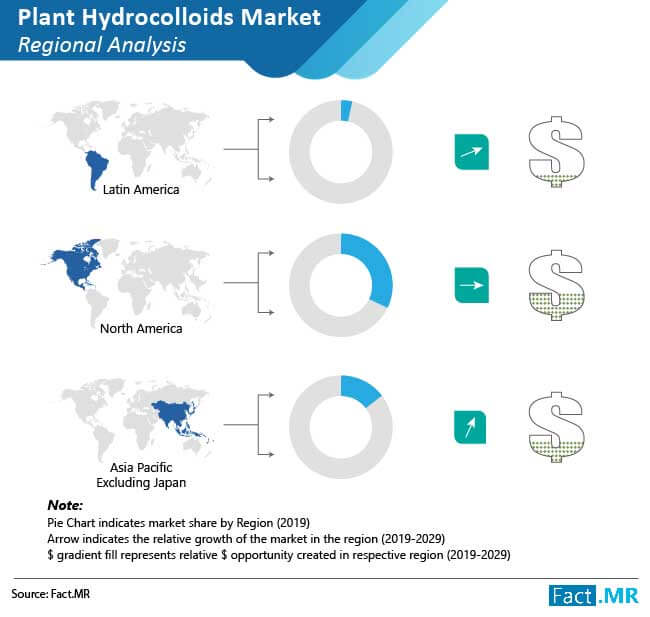 Inorganic growth through strategic acquisitions has been a key strategy of the companies functioning in the plant hydrocolloids market. In line with this, Ingredion Incorporated has made significant acquisitions in recent times.

For example, In March 2019, Ingredion Incorporated acquired Western Polymer, a company based in Washington, United States to further invest and expand its starch business.

Starch is a strong and commonly used plant hydrocolloid. Western Polymer is involved in the processing of potato starch whereas Ingredion is looking for capacity expansion of potato starch and enhancing its processing capabilities. With the help of such acquisitions, companies are going for inorganic growth to increase sales in plant hydrocolloids. 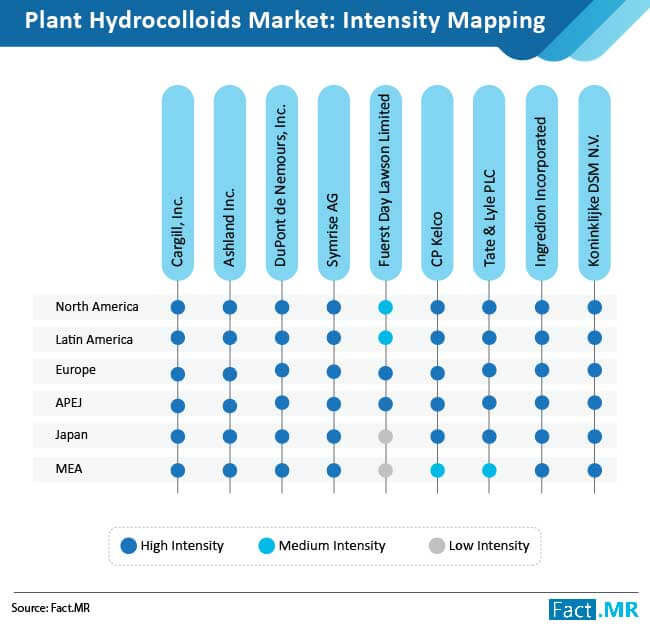 FactMR’s study has done the segmentation of plant hydrocolloids market on the basis of source, application, function, form and region.