Increase in use of electronic devices is driving the demand for MEMS sensors. Moreover, manufacturers are focusing on integrating MEMS sensors with IoT. In addition, qualities of MEMS sensors such as being light-weight and requiring less energy is playing a crucial role in the adoption of MEMS sensors.

With the fast development of 5G network technology, MEMS sensors are set to play a more critical role in providing information to modern-day consumers. Combining with the benefits of IoT, AI, and VR, the next-generation of MEMS sensors will assist end users in interacting with devices, ranging from consumer electronics to industrial equipment.

Thus, due to the aforementioned reasons, the sales of MEM sensors exceeded US$ 75 Bn by registering a double-digit CAGR of 18.01% in the assessment period 2022-2032.

What is Driving Market Growth of MEMS Sensors?

The global micro electro mechanical systems (MEMS) sensor market is expected to witness tremendous growth owing to high technological advancement in the field of semiconductor and telecommunication industry. In recent times, MEMS sensors have become the key component of whole new classes of devices such as smart watches, fitness tracker, virtual reality (VR) glasses and smart sensors nodes for Internet of Things (IoT). Evolution of MEMS sensors have led to reduction in size, making these sensors more compact and efficient, cost-effective, and compatible.

The ubiquity of smartphones and the massive influx of advanced consumer electronics will continue to drive the MEMS sensor market growth over the forecast period. MEMS sensor manufacturers are focusing on identifying and leveraging white spaces in application of their products in automotive and healthcare industries.

Greater emphasis on safety features and favorable regulatory policies for automotive electronics along with increased automation in the healthcare industry are projected to drive the MEMS sensor market. In addition, the launch of Next Generation Network (NGN) and implementation of Internet of Things (IoT) in various enterprises are expected to fuel the MEMS sensor market growth. Moreover, with increasing application scope in biotechnology, smart city, smart grids, smart stadium and connected cars, the MEMS sensor market is experiencing credible growth.

MEMS sensor finds its usage in numerous technical application, ranging from automotive to medical industry. Advancement in field of medical, communication and biotechnology is projected to drive demand for MEMS sensors over the forecast period. Application of MEMS sensors in the automotive industry is expected to show significant growth, backed by increased automation in automotive manufacturing and introduction of connected autonomous cars.

Increasing disposable income has also resulted in mounting demand for smart devices such as smart phones, smart watches, and wearable devices. Subsequently, use of MEM sensors in consumer electronics is likely to account for nearly half of the global market value by end of the forecast period.

Prominent players in the MEMS sensor market performance coating are focusing on the expansion of their product line to meet demand associated with different applications and segments.

For instance, in November 2019, Cree, Inc. and STMicroelectronics announced the expansion and extension of their long-term silicon carbide (SiC) wafer supply agreement. This agreement was aimed at multiplying value for the supply of MEMS sensors to Cree by nearly doubling its volume over the duration of 10 years.

Besides, these key players are also entering into long-term collaboration with end-use industries and raw material suppliers to strengthen their presence in both regional and global markets.

How do Growth Prospects Appear for MEMS Sensors in North America?

North America is seen as most lucrative region for the MEMS sensor market, backed by high growth in consumer electronics industry as well as increased demand for modern automobiles and wearable devices, the sales of MEMS sensors have escalated in U.S. and Canada.

Moreover, regional trend and regulatory policies play an important role in development of the MEMS sensor and semiconductor markets. Thus, North America is expected to register a CAGR of more than 18% in the sales indicator period.

With favorable regulatory compliances and sustained demand for renewable energy infrastructure, power electronics and automotive, developing economies such as India and China are emerging as fastest growing markets for MEMS sensors. Thus, Asia Pacific is expected to garner a market revenue of 8.1 Mn in the assessment period 2022-2032. 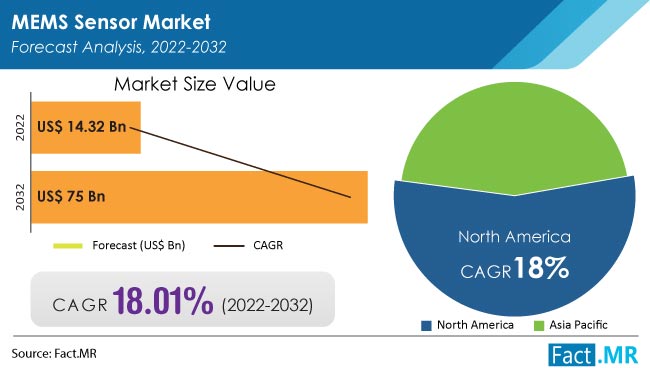 Which is the Dominant MEMS Sensor Type by Fabrication?

Demand for MEMS sensors processed with polymer as fabrication material is poised to grow at a higher rate compared to other fabrication material such as silicon, ceramic, and metal over the forecast period. With fast-expanding range of application, from semiconductor chip to flexible devices, demand for MEMS sensors fabricated with polymer will continue to grow at an impressive rate.

By Type, Which is the Most Preferred MEMS Sensor?

Optical MEMS Sensor to Gain Significant Traction due to Fiberization

Optical MEMS sensor continues to account for a major share of manufacturers’ bottom lines, with increasing adoption of FTTH services and fiberization of telecommunication BTS. Furthermore, introduction of NGN backed by concept of MIMO (Multiple-Input-Multiple-Output) will drive sales of optical MEMS sensors, at an impressive growth rate of 22% over the forecast period.

Chemicals and biological sensors will follow the growth trend with increasing adoption in remote surgery and other biomedical applications. Mechanical MEMS sensor is also gaining significant momentum, which is expected to account for 30% of total market revenue by 2032.

Increase in use of electronic devices along with integration of IoT are the key trends driving MEMS sensor sales.

Optical MEMS sensor are expected to register a CAGR of 22% market share for MEMS sensor market.

The MEMS sensor industry is expected to register a CAGR of 18% market share throughout North America.

The MEMS sensor industry is expected to garner US$ 8.1 Mn market revenue throughout Asia Pacific.