Wireless technology has been in the development phase and has witnessed significant growth across all end-use applications. Manufacturers of self-powered sensors have channelized their focus on energy harvesting as it offers potential revenue generation opportunities.

Manufacturing companies will continue to see a rise in self-powered sensors due to increased automation in end-use industries. Sensors are a crucial part and the backbone of any IoT system. There is the chance to realize the potential for greater productivity, transparency, and efficiency with the integration of self-powered sensors. 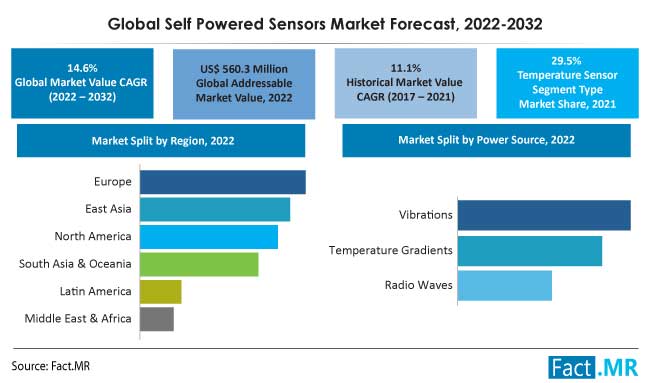 Why is the Importance of Self-Powered Sensors Rising at a Fast Pace?

Different types of sensors, including temperature sensors, level, pressure sensors, and image sensors, have experienced a significant size reduction as a result of technological advancements over the past ten years. As a result, sensors are being utilized more widely across industries, including automotive, healthcare, consumer electronics, and many more. This has significantly contributed to the expansion of the market for all battery-free sensors.

Small form factor sensors have been quickly incorporated into gadgets such as smartphones, drones, wearables, and robots over the past few years. The usage of sensing technologies in IoT applications has expanded owing to the development of low-cost, highly dependable sensors.

At present, sensors are utilized in practically all applications across several end-use industries. Based on these factors, the market for self-powered sensors is expected to showcase 3.9X growth over the forecast period of 2022 to 2032.

Despite the enormous potential of IoT, there are worries about data privacy and security related to IoT devices. Every aspect of IoT is data-driven. Sensors and IoT-enabled devices produce enormous amounts of data every second. Different kinds of sensors are used by businesses and organizations to monitor this data and make decisions based on it. It is vital to ensure the authenticity of data as well as the security, resilience, and dependability of devices that gather data since real-time business operations increasingly rely on machine-generated data.

IoT creates additional decentralized entry opportunities for malware since it connects various gadgets. Cyber attackers may use IoT infrastructure as an access point and harm other networked devices if they are not adequately secured. Unless market players come up with robust solutions with respect to cybersecurity, the market will not grow as per its full potential.

“Increasing Use of Wearable Devices to Aid Market Progress”

In wearable devices, self-powered sensors provide energy supply for portable and wearable products. Consumers use wearable devices because they can save time from travelling for a check-up or they can monitor health at home with ease. A wearable device is also used as a tracking device.

An upsurge in the number of service and manufacturing companies has completely changed the wearable device sector in the last few years. Increasing use of wearable devices is directly supporting the market growth of self-powered sensors.

Thereby, demand for self-powered sensors to be used in wearable devices is set to create an absolute dollar opportunity of US$ 260.2 million during the forecast period.

What Makes the U.S. an Attractive Market for Self-Powered Sensor Producers?

Moreover, rapid development of the country’s automotive & transportation sectors presents significant opportunities for market participants. Due to the increasing demand for healthcare devices, these allied end-use industries are likely to create a lot of opportunities for self-powered sensor manufacturers in the near future.

Because of developments in safety standards and technologies, and government regulations in this direction, the United States will hold significant potential for self-powered sensor sales over the coming years, and is expected to grow 3.7X by 2032.

Why is China Leading the East Asia Market for Self-Powered Sensors?

China holds a commanding position and accounted for 67% of East Asia’s self-powered sensor production in 2021.

China has increased its focus on know-how in knowledge-intensive manufacturing and developing the capacity of semiconductors. East Asia is expected to exhibit high growth of the self-powered sensors market as it has the most portable device users in the world, which are mostly based in China. R&D of energy harvesting systems for self-powered sensors is currently increasing in China to support the major build-up of new power plants in the country.

Demand is primarily driven by established traditional industries and wireless sensor industries in the country. The China market for self-powered sensors is valued at US$ 86.1 million in 2022.

How Will the Automotive Sector Create High Revenue Streams for Self-Powered Sensor Manufacturers?

During the projected period, the automotive sector is anticipated to account for the largest market share for battery-free sensors. Automobile manufacturers all over the world are putting a lot of effort into automating and modernizing their manufacturing lines as well as end products. This is because of benefits such as improving the performance and efficiency of assets and equipment at lower maintenance costs.

Self-powered sensors are being used at a substantial rate by the auto industry. These sensors assist vehicle assembly activities effectively and enable predictive maintenance. Consequently, it is anticipated that over the course of the projected period, the automotive industry will hold the greatest market share.

Integration of technology in self-powered sensors has witnessed significant growth at 14.6% CAGR and has reached a market valuation of US$ 560.3 million in 2022.

Why is the Vibration Power Source Widely Used in Sensors?

The shortcoming of radio waves (RF energy harvesting) is that they may interfere with the already existing frequency in the environment and get modulated, which can disrupt communication.

Global manufacturers of self-powered sensors are trying to adopt newer technologies to stay on the top of the competition. Key manufacturers are focusing on inventing new solutions for vehicles with wireless charging, enhancement of safety & comfort, and creativity in their products.

Strategic alliances, product launches, partnership agreements, capacity expansion, and other related strategies are being resorted to by industry participants.

The global self-powered sensors market is currently valued at US$ 560.3 million.

Worldwide demand for self-powered sensors is anticipated to reach US$ 2.19 billion by the end of 2032.

Europe will enjoy 25.1% share of the global self-powered sensors market by 2032.