From 2018 to 2022, the global market for PIR sensors registered a CAGR of 6.2%, according to Fact.MR, a market research and competitive intelligence provider.

A passive infrared (PIR) or pyroelectric sensor is an electronic sensor that detects infrared (IR) radiation emitted by objects in their surrounding field. They are most commonly used in PIR-based motion detectors. PIR sensors are utilized in thermal sensing applications such as motion detection and security. They are widely used in auto lighting, motion detection alarms, and security alarm applications. A PIR sensor is the key component of a motion sensor. Humans and animals emit thermal or heat energy in the form of infrared radiation. PIR motion sensors capture this thermal energy from the environment using a pair of pyroelectric sensors.

PIR sensors have vast applications such as lighting controls, thermostats and HVAC systems, smart home and IoT, IP cameras, and surveillance systems in many end-use industries such as consumer electronics, automotive, industrial & manufacturing, aerospace & defense, residential, and others.

Due to their lightweight aspect, cost-effectiveness, and low power consumption feature, passive infrared sensors are gaining traction in several applications, from the military industry to the IoT industry. These sensors help in detecting infrared light from far away, operating in real time, and detecting movements, making them ideal for security purposes.

In the 21st century, networked digital, and data-heavy battle spaces have become crucial for war fighters’ security and success. The main growth driver is motion imagery, which helps during day-night light conditions and in improving users’ ability to identify targets.

Infrared sensors can help in increasing the situational awareness of the operator by providing the ability to recognize sea, land, and waterway features, and contact patrol craft and small boats in near-shore environments where surface radar performance is limited. Owing to the versatile applications of PIR sensors, their sales are poised to rise rapidly over the coming years.

With the advent of Industry 4.0, intelligent manufacturing practices received a major boost. With industries slowly becoming intelligent, the need for automation, real-time surveillance, and real-time data analysis has become an integral part of an intelligent production environment.

Intelligent production methods often promote the incorporation of sensors and IT infrastructure to orchestrate their work cost-efficiently in a streamlined environment to drive the entire intelligent manufacturing process.

PIR sensors, when integrated with IoT-enabled detection devices, provide exact information about the presence of a person or animal in the surrounding area by detecting the IR radiation, preventing any mishaps. This, in turn, boosts the demand for PIR sensors in diverse industries, which are moving towards the ultimate goal of IoT-enabled ecosystems and smart manufacturing.

A typical PIR sensor has a range of 180 degrees, which is around 30 feet. A more advanced model with a 360-degree view can be mounted on the ceiling to monitor all movements more effectively.

Depending on the size of the room and the location of the sensors, there may be movement in areas outside of what is being monitored. This can lead to inaccurate occupancy data for buildings and offices. Also, PIR sensors can face difficulty detecting the presence of people sitting for long periods and are less accurate at determining workplace occupancy patterns.

Infrared sensors detect images that are often based on the temperature variations of the object and they cannot detect differences in objects that have a similar temperature range. Many times, this leads to inaccuracy. All these limitations of sensors will hinder their usage to some extent. 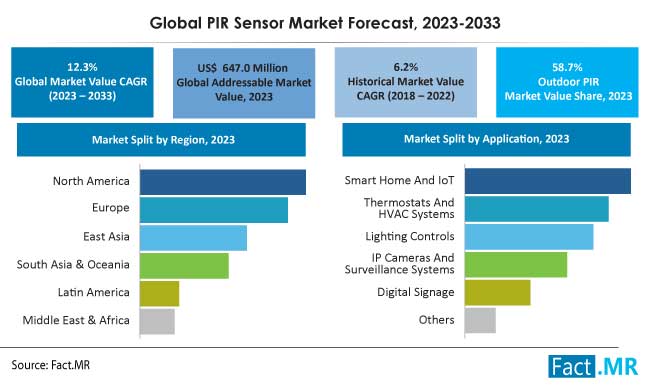 Market share analysis of PIR sensors based on application and region. Under the application segment, the smart home and IoT sub-segment dominates with 26.1 % market share in 2023.

Why is the China PIR Sensor Market a Lucrative One?

China is at the top in manufacturing semiconductors and other consumer electronics products. It accounted for US$ 239.5 billion, which was approximately 53.7% of chip sales in the country in 2020. In 2021, China's semiconductor industry witnessed rapid revenue growth for SMIC, HiSilion, OSAT, and IDM, companies exhibiting CAGRs of 32%, 36%, 23%, and 23%, respectively.

China's industrial production grew 6.3% year-on-year in September 2022, beating the market consensus of 4.5% growth in August. Consumer electronics market revenue is expected to reach US$ 251.4 billion by 2022. The largest segment of the market is the telephony segment, with a market size of US$ 120.7 billion in 2022. The PIR sensor market in China will expand at an impressive CAGR of 12.4% during the forecast period.

Modern cars are equipped with a large number of sensor systems that guarantee a high level of comfort and safety at each stage. Each sensor communicates with the car's electronic control unit to send alerts informing it of its condition.

There are many vehicle security systems, used to detect abnormal driver behavior, such as alcohol detection and drowsy gestures when the vehicle is in motion. When the PIR sensor is linked with the microcontroller in the control unit all such activities can be detected, hence avoiding any chances of accidents.

At about 6.6 million kilometers (about 4.1 million miles) in 2020, the United States had the most developed road network in the world. By 2022, more than 76% of the U.S. population will own a private car, and an additional 19% will own a company or family car. High demand for domestic cars drives a thriving automotive industry.

In 2021, the U.S. auto industry sold approximately 14.9 million light vehicles. The impressive growth of the automotive sector in the country will mount the sales of PIR sensors by an impressive CAGR of 9.9% in the long run.

How Will Increasing Trend for Smart Homes Boost Sales of PIR Sensors?

The most attractive and useful ways to use these sensors are small things such as turning on lights. Smart thermostats have come a long way, but not everyone has a thermostat that provides automated heating schedules for your family presence.

Also, thermostats often limit their range to just heating. Installing PIR motion sensors at the entrance of your home to automatically turn off lights and appliances is also a new trend that is being implemented. The sales of PIR sensors due to the smart home application will grow impressively and obtain a valuation of US$ 168.9 million in 2032.

Why is the Consumer Electronics Industry Leading the Sales of PIR Sensors?

New materials and processing techniques improve the infrared detection rate of pyroelectric infrared sensors, lengthen the response wavelength, reduce response time, improve pixel sensitivity and pixel density, increase interference, and reduce production costs will be some of the advancements which will lead to the growth of the market.

The global PIR sensor market is currently valued at US$ 567.2 million.

North America leads the global market for PIR sensors accounting for 28.6% share in 2023.

Worldwide demand for PIR sensors is anticipated to reach US$ 2.06 billion by 2033-end.