From 2017 to 2021, the global Point of Sale (POS) Terminals market registered significant gains, registering a CAGR worth 5%. Budding ecosystems of cashless payments in developing countries are set to fuel the demand for POS terminals in retail, healthcare, and restaurants.

How is the Prevalence of Cashless Payments Encouraging POS Terminals Usage?

Digital transformation of end-use industry verticals such as retail, healthcare, and hospitality is propelling the demand for Point-of-Sale (POS) terminals.

As a result, mobile POS terminals are projected to exhibit high growth during the forecast period. Innovation of POS systems integrated with inventory, merchandising, marketing, and customer relationship management will give manufacturers a competitive edge. The prevalence of digital payments is a central force behind the growth of the POS terminals market.

Which Region is projected to dominate the Usage of POS Terminals?

POS machines have evolved over the years owing to the transaction-oriented terminals/devices to systems that merge well with the company's CRM along with the financial solutions. This evolution has empowered end-users with business intelligence to manage their revenue streams and inventory better.

East Asia leads the usage of POS machines with a majority market value share of over 49%. Surging penetration of online transactions in China and Japan will prove to be a driving factor behind the impressive 8% growth during the forecast period.

South Asia & Oceania are projected to exhibit the second largest market share with a strong 9% CAGR from 2022 to 2032. Developing countries in the Asia Pacific are witnessing a boom in cashless payments which furthers the demand for point-of-sale terminals.

Investments in developing network infrastructure and cloud-based POS machines present remunerative opportunities. According to a 2020 survey by Visa Inc., the adoption rate of cashless payments in Singapore accounted for 98%, followed by Malaysia (96%), Indonesia (93%), Vietnam (89%), Philippines (89%), and Thailand (87%).

How attractive are the Opportunities for POS Terminals Landscape in the U.S?

Increasing Reliance on Cashless Transactions in a post-pandemic era

The U.S. market will continue to be the most lucrative market for POS terminals, with an ever-expanding growth and development of network infrastructure to support cashless transactions. A CAGR worth 7% is anticipated for the market as per Fact.MR.

This will define how manufacturers employ business strategies in the US.  In the post-COVID-19 era, consumers are exploring various sales methods. According to the latest retail experts and shopper surveys, this new behavior is expected to stay over the forecast period. Such trends have affected the demand for POS terminals across regions.

How is the Market Performing in Emerging Economies like Japan and China?

As per the Fact.MR analysis, East Asia leads the market with a majority market value share of over 49%. Surging penetration of online transactions in China and Japan will prove to be a driving factor behind the impressive 8% growth during the forecast period. 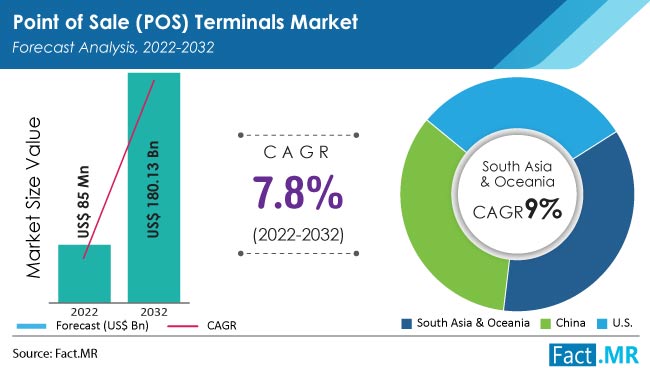 Which Component Type is expected to dominate the Market?

According to Fact.MR, the software segment is anticipated to exhibit robust growth and will grow 3x through 2032. The fast growth of the software segment over the forecast period can be attributed to high data support functionalities and advancements in cloud computing. The growing utilization of software-as-a-service (SAAS) platforms for POS terminals will further fuel the demand for software components.

Which Application of Point of Sale (POS) Terminals is Propelling Growth?

Retail is set to propel the demand for POS terminals with a maximum market value share of over 34%, closely followed by Restaurants. Mass adoption of cohesive technologies such as Near Field Communication (NFC) in debit and credit cards will drive product demand in the retail segment.

Which Product Type is projected to drive the Sales?

Fixed POS terminals are projected to be in the lead in terms of total market value with a robust growth rate of over 7% during the forecast period. This is attributable to the rising demand for enhanced consumer experience in retail.

Deployment of fixed POS terminals as self-checkout systems will drive demand during the forecast. Fixed POS terminal holds a leading share of more than 3/4th of the total market value.

According to Fact.MR, the point of sale (POS) terminals market is expected to be valued at US$ 85 Bn in 2022

The POS terminals market in the U.S is slated to grow at a CAGR of 7% until 2032

China is expected to be the largest market for POS terminals, expected to surge at an 8% CAGR

East Asia is expected to capture the maximum revenue share, comprising 49% of the global landscape