The global earth observation system (EOS) market is projected to expand at a CAGR of around 9% over the next ten years, with most demand coming from North America, followed by Europe.

Earth observation systems have various applications across a wide variety of industries, such as defence, environment & natural resource monitoring, location based services, and many others. Additionally, application industries such as disaster management, global positioning services, maritime industry, and others complement market growth. As EOS satellites are placed in space and monitor the earth, data acquired gives a unique and different view, with which we can make effective decisions. Furthermore, application of earth observation systems are also in power & energy, maritime and others, leading to their steady demand across regions.

The foremost objective of the report by Fact.MR on the earth observation satellite industry is to pitch insights on the market scenario, demand generators, and technological advancements in this space. The report provides a taxonomy elaborating on key segments. The report also outlines visionary insights on the dynamics of the market, including the drivers, restraints, opportunities, trends, and pricing analysis, along with key success factors. Market trends have been tracked in 20+ high-growth countries, pointing towards countries in North America, Europe, and East Asia holding bulk of the market share.

By 2031, the earth observation industry is estimated to observe high growth at a CAGR of around 9.0%, along with escalating growth in valuation to US$ 7.3 Bn.

Key players in the market are functioning actively and strengthening their resources and networks. Extensively investments are being done by market players to strengthen their infrastructure with a vision to acquire a large chunk of the market share.

What are the Constraints for Earth Observation Companies?

With the current technology, we are able to launch satellites into orbit and also control them to analyse data. However, technological requirements for earth observation and space exploration are still in the upgrading and developing phase. Stakeholders are investing in the development of infrastructure. With advancements in technology such as implementation of big data for data analysing, artificial intelligent data processing will improve overall efficiency.

Earth observation systems are an expensive affair, and infrastructure requirements for these systems are complex and a highly skilled workforce is required. Data derived from space is encrypted and requires high skills in programming languages, and the employees should also be proficient in big data, data science, and other related fields. Companies in this market need to spend substantially in order to be competent in the market. This is one restraint that could hamper opportunities for earth observation to some extent. 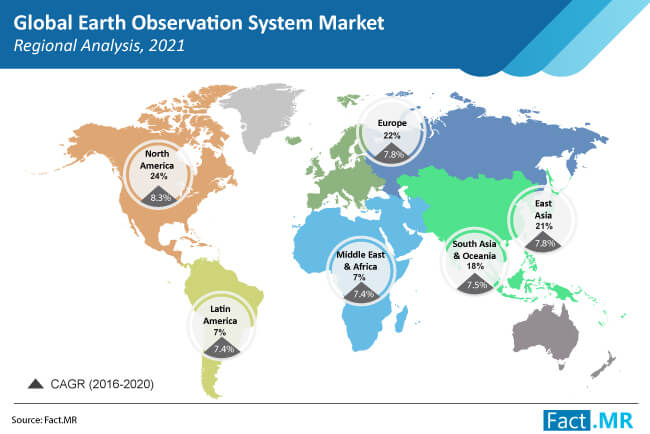 Which is a Prominent Region for Earth Observation Systems?

North America is the prominent region when it comes to earth observation systems. North America is expected to account for more than a quarter of the overall market share by the end of the forecast period. The reason behind this dominance is many factors, including advancements in space technologies such as reusable rockets and others. In addition, government support towards aerospace is huge, as North America’s ex-president Donald Trump has officially added. Space Force, as a branch of the U.S. Armed Services, has made this region prominent and is also expected to bring lucrative opportunities for earth observation system manufacturers.

Innovations and developments from the downstream end of space value end chain has led to expansion of applications for space-derived data and services, which has benefited the launch of new business, new industries, and new solutions. Some examples being precision agriculture, environment management from forest to reef, mining, and others. These developments at the downstream end and their applications are driving the upstream market and eventually raising overall demand for EOS. 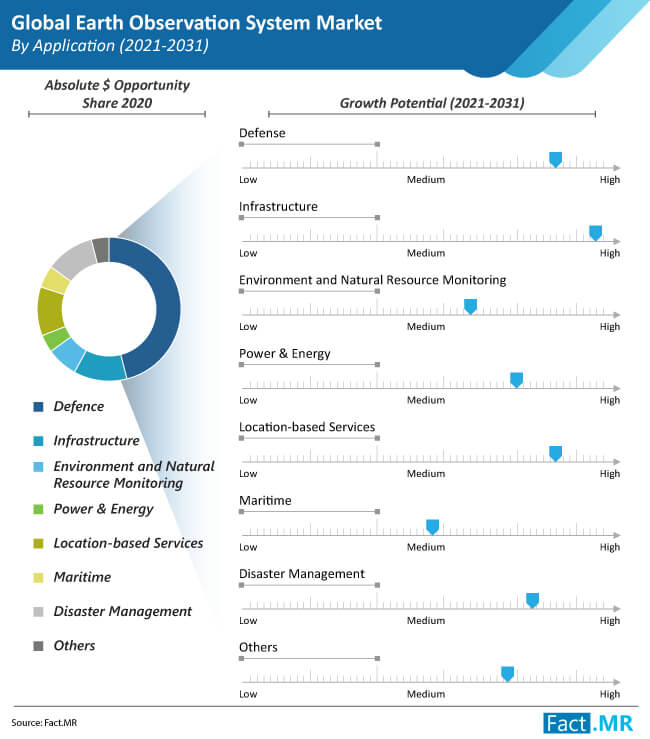 How Big are the Opportunities in Aerospace & Earth Observation?

Was There any COVID-19 Impact on the Earth Observation System Market?

This market is investment-based where investments across segments hasn’t observed a major decline over time. Services of systems have observed nominal growth and investment inflows have remained almost stagnant. Probability of risk drawn for the market over the period has remained stable, and is set to lower over the long-run forecast period with growing subscription of services of earth observation systems.

Fact.MR projects the market to register a CAGR close to 9% by value across the 2021-2031 assessment period. Higher penetration of EOS in the infrastructure industry will bolster demand over the coming years.

As per Fact.MR’s projections, the U.S. is expected to hold a pivotal role driving demand for earth observation systems. Surge in demand from defense and infrastructure industries is set to be observed across the country.