Sales of armour steel plate accounted for nearly 0.7% of the global special steel market at the end of 2021. Construction and defense are two dominant end-users that account for major revenue generation opportunity.

The ultimate goal of armour materials is the development of better armour for combat platforms that are capable of winning battles, such as main battle tanks, infantry fighting vehicles, and light fighting vehicles. The primary goal in each of these applications is one of two things: either improve performance at a constant or even reduce weight or reduce weight while maintaining protection. Armor steel plate manufacturers have developed a wide range of specifications for their current products.

Companies offer steel products ranging from thinner (2mm-16mm) to thicker and wider products, including armour steel plates (5mm-50mm), to meet end-user’s specific demands and increase sales. As a result, end users are able to select the perfect specification of armour plate that is best suited for their application owing to the availability of a wide range of steel plates.

Over the 2017-2021 historical period, the global armour steel plate market registered a CAGR of 2.3%, and according to the Fact.MR, a market research and competitive intelligence provider, the market is projected to exhibit growth at 3.8% CAGR between 2022 and 2032. 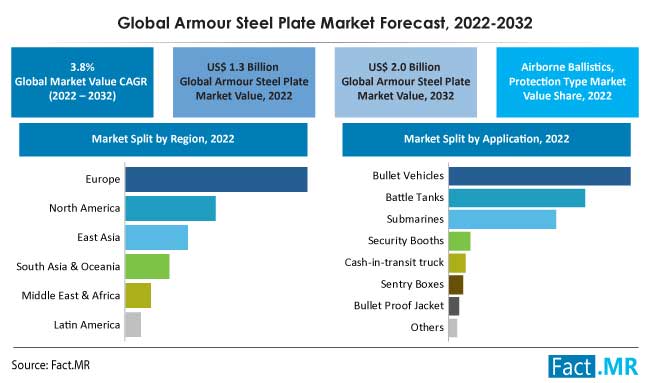 Market share analysis of ASP based on application and region is provided in a nutshell in the above image. Under the application segment, the oil & gas sub-segment dominates with 36.7% market share in 2022.

Exceptional advantages of steel over other materials, such as high-temperature strength, oxidation resistance, and quenching quality are helping it to maintain its dominance in the market. Steel heat-treated plates are employed to change the physical and mechanical properties of steel without changing its shape. The heat treatment process helps to increase or improve the hardness, elasticity, ductility, and toughness of the steel.

Surging construction projects and huge investments in infrastructure development coupled with growing urbanization across emerging economies are rising the demand for steel plates.

Thus, surpassing the demand for specialty steel from the construction sector to fuel the market's growth.

Further, the global defense industry has been growing at a steady pace. According to the data source Stockholm International Peace Research Institute (SIPRI), the total military spending raised to US$ 2.11 trillion in 2021. The United States, China, India, the United Kingdom, and Russia, are major economies investing in defense and collectively account for 62% of military expenditure.

Armed forces across the globe are leveraging the power of digitalization and developing network-centric defense ecosystems to strengthen action readiness and modernize battlefield operations. Such factors determine the concrete growth opportunities for the market.

For instance, companies are even restricted to acquire a defense-related business without government approval. Further, proper tender management is done to ensure the supply of armor steel plates to the government-authorized end user only.

Which Factors Drive High Demand for Armour Steel Plate in US?

The US armor steel industry is sensitive to federal funding for defense, the threat of terrorist attacks, and national security levels. United States has a series of defense improvement programs under its belt that tend to present a cluster of opportunities for the armor steel plates market growth over the assessment period.

Thus, there is no reason that counties such as China and Russia should be making the steel used in the US military’s vehicles and equipment. Thus, limited supply and growing US defense expenditure, fuel the market’s demand across the country.

Why India Projects Promising Growth Opportunities for the Market?

The Indian economy heavily depends on the defense manufacturing sector for all its military needs. The industry is estimated to grow faster as national security concerns increase, due to the ongoing territorial disputes between India and Pakistan, over control of the northern state of Kashmir.

Further, India has been one of the top importers of defense gear over the past five years to gain a technological edge over rival nations like China and Pakistan.

The growing manufacturing across the country offers high growth opportunities for the market players to enhance their presence and earn high-profit margins.

Why Europe Tops the Regional Chart for the Market?

Europe has always been a prominent investor in its military power. Statistically, France, Russia, and the United Kingdom have been investing a big amount of money in developing advanced weapons to strengthen their military power to conquer their enemies from miles away.

In addition, it is witnessed that the expenditure of Russia on weapon development and military expansion was high. For instance, Hence, it is estimated that Russia has a high demand for armour steel plates over the period.

Hence, the invasion has surpassed the weapons requirement for both countries and forced other economies to focus on their military advancements. Such measures increase the demand for the market and result in high revenue generation.

Countries are spending highly on advancing their military power by opting for advanced weapons. Airborne ballistics gain traction as with the integration of emerging advanced technologies, airborne ballistics can target far distances and can be remotely managed.

It also enables the military to defeat their enemies in the sky as well. Such factors surge the demand for airborne ballistic missiles and others. For developing such airborne ballistics armour steel plates are widely used. Hence, with the growing investment in military expansion and development of advanced weapons increases the sales for the market.

What Supplements the Growth of Bullet Proof Vehicles?

With the growing terrorist activities and threats to famous personalities or political leaders, bulletproof vehicles are the only choice for safety and security. Further, the government of various economies is investing in defense and developing such solutions to increase the safety of their political leaders and army personnel.

Celebrities and millionaires also opt for bulletproof vehicles to ensure safety and security. Countries, where local people have permission to keep guns, have a high demand for such vehicles, which offers immense growth opportunities for the market.

Sales of equipment or services used in protection applications, such as tanks and impenetrable vehicles, have a significant impact on the growth of the global market for reinforcement steel plates. In order to secure long-term supply contracts for reinforcement steel plates, dynamic market players have been investing in government protection frameworks.

Market players are focused on developing regions and built their structural underpinnings with long-term supply agreements. The key system anyway remains to ink an agreement with national governments to supply covering steel plates for requesting applications, such as battle tanks and submarines.

How is the market for armour steel plate expected to fare going forward?

Worldwide demand for armour steel plate is anticipated to value at US$ 1.9 billion by 2032-end.

What is the global armour steel plate market size?

The global armour steel plate market is valued at US$ 1.3 billion in 2022.

How did the market perform over the last few years?

Metal Magnesium Market is expected to reach a valuation of US$ 7.6 Bn by 2032. Die casting applicati...