Radiation proctitis treatment is grabbing eyeballs, with major healthcare providers and companies augmenting their R&D capacities to introduce highly advanced treatment approaches. Moreover, increasing hospitalization rates due to major types of cancers is inclining the deployment of radiation therapy, leading to the emergence of conditions such as ulcerative colitis.

As the global burden of cancer increases, patients are seeking highly effective therapeutic approaches, including chemotherapy and radiation treatment. A series of clinical trials were initiated in the past to verify the efficacy of numerous therapeutic approaches, leading to a significant incline. As of 2019, the market surpassed US$ 300 million.

During the COVID-19 pandemic, the market experienced significant development, especially with regard to enhancing availability of hyperbaric oxygen therapy (HBOT), as it hyperoxygenates the blood to inhibit possible inflammation of muscles and tissues. However, a blip was experienced in the initial phases, attributed to postponement of elective surgical procedures.

According to Fact.MR’s projections, prospects appear largely optimistic for 2021. Long-term prospects also appear healthy, with a projected CAGR of around 7% for the next ten years, and a market valuation of nearly US$ 750 million for 2031.

According to the World Health Organization, cervical cancer is the most prevalent type of pelvic cancer, with an estimated 570,000 women being diagnosed as of 2018. By 2020, this number rose to over 600,000, representing 6.5% of all female cancers. Cervical cancer is the most common cancers among women across more than 30 low- and middle-income countries, mostly in sub-Saharan Africa.

Consequently, various therapeutic approaches have been introduced to address this ever-widening problem. Amongst all, radiation therapy is the most extensively deployed, both, as a part of the main treatment as well as to treat its recurrence. The most commonly relied-upon treatments include external beam radiation and brachytherapy.

External beam therapy deploys X-rays at the cancer site, albeit with a much stronger radiation dosage. However, prolonged exposure to such radiation heightens the risk of developing ulcers or lesions in the pelvic area, especially near the rectum, leading to the development of proctitis at these sites, thus fueling demand for its treatment across key regions.

Why is Hyperbaric Oxygen Therapy Poised to Generate New Opportunities?

HBOT is being touted as one of the few highly effective treatments for patients with severe radiation-induced symptoms, including proctitis and cystitis with bleeding. Although existing evidence provides highly limited data regarding its efficacy, clinicians are optimistic about its future application potential, with existing clinical trials attempting to establish some concrete proof.

Presently concluded HBOT trials have established that healing responses in patients with refractory radiation proctitis yielded an absolute risk reduction of 32%, with other medical management requirements discontinued and the need for advanced interventions largely avoided.

Besides oral drug therapies, prominent companies and healthcare providers are offering a slew of alternative treatment approaches, including remedial laser techniques to address cases of continuous rectal bleeding. Moreover, formaldehyde administration prior to surgical therapy is also being considered. During a clinical trial, a 4% formalin was administered to 20 patients with clinical and proctoscopic evidence of radiation proctitis.

This treatment involved direct administration into the rectum, with highly positive results. A complete resolution of symptoms was achieved in all the patients. Moreover, healthcare professionals are conducting a descending or transverse colostomy for patients when surgery is required. Companies in the radiation proctitis treatment market are increasing the availability of intraperitoneal injections of formalin.

Other novel methods such as cold therapy and radiofrequency ablation (RFA) are grabbing the attention of healthcare providers. Colostomy is gaining prominence as an effective and safe procedure for treating rectal ulcer of chronic radiation proctitis patients. Colostomy helps control rectal bleeding and effectively relieve pain in patients.

Cost is one of the major factors that influences the selection of treatment. Hyperbaric oxygen therapy is one of the few treatments for patients with severe radiation-induced symptoms, which include proctitis and cystitis with bleeding.

Currently, hyperbaric oxygen therapy is expensive, and therefore, low- and middle-income patients are unable to afford it, despite significant therapeutic effects. This might act as a major restraint for the growth of the radiation proctitis treatment sector. 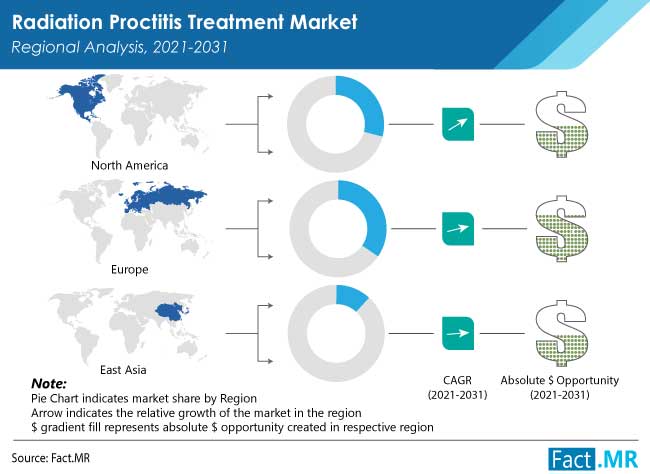 Why is Demand for Radiation Proctitis Treatment High in the U.S.?

According to the National Center for Biotechnology Information, radiation therapy is extensively utilized for pelvic malignancies, including prostate cancer, colorectal cancer, and cervical cancer. In spite of advances in radiation science, nearly 75% of patients suffer from acute radiation proctitis, with up to a fifth experiencing chronic symptoms.

It is estimated that more than 200,000 patients undergo radiation therapy across the U.S. for abdominal, pelvic, and retroperitoneal malignancies, including but not limited to, prostate cancer, bladder cancer, gynecologic cancers, rectal cancers, and lymphoma. An estimated 1.5 to 2 million cancer survivors suffer from radiation induced intestinal tract dysfunction. Several gastrointestinal symptoms have been observed in over 30% of the patients.

Based on these aforementioned trends, the scope for radiation proctitis treatment across the country has increased manifold. Opportunities abound for manufacturers in the hyperbaric oxygen treatment domain. Sechrist Industries Ltd. is a prominent manufacturer of this technology, offering such product ranges as the Model 4100H, 3600H, 3300H, and 2800 pneumatic hyperbaric oxygen chambers. In the future, this technology has tremendous potential to address a majority of radiation proctitis cases, leading to the generation of multiple revenue streams.

The UK radiation proctitis treatment market is highly reliant on growing cervical cancer treatment. According to Cancer Research UK, between 2015 and 2017, on average each year around a tenth of new cases (9%) were in females, aged above 75 years. It is the 14th most common cancer in females, accounting for 2% of total cancer cases.

Over the years, major technological advancements have ushered in highly sophisticated treatment approaches, including radiotherapy, which account for 40% of the total cancer treatment across the UK. As it uses high energy x-rays to kill cancer cells, it is highly preferred as a part of the main treatment. However, this approach also has numerous side effects.

Symptoms such as diarrhea, bladder inflammation, vaginal bleeding, sore & red skin and fatigue are commonplace, as are some long-term changes such as early menopause and skin changes, along with irritation of the rectum. Hence, manufacturers are expected to increase their foray in this region in the long-run forecast period.

Will Increasing Healthcare Expenditure Drive the Market in Germany?

A substantial part of this budgetary allocation has been directed towards funding extensive cancer research and diagnostics approaches. Majority of these approaches involve conventional methodologies, including surgery, chemotherapy, radiation therapy, as well as targeted therapy, immunotherapy and other progressive directions of oncology for a variety of cancers.

Unfortunately, the increasing reliance on radiotherapy has elevated incidences of radiation proctitis. Hence, several medications have been approved for the treatment of ulcerative colitis, a common manifestation of radiation proctitis. The most recommended first-line treatments for mild to moderate ulcerative colitis include anti-inflammatory 5-aminocsalicyclic acid (5-ASA) preparations containing sulfasalazine, mesalazine or olsalazine.

Although treatment for acute radiation proctitis remained dominant, attributed to a high prevalence rate (20%), chronic radiation proctitis treatment is anticipated to witness significant momentum in the forthcoming decade. While acute side effects manifest up to 3 months post treatment, chronic ones usually occur 3-6 months, or even years later post radiation therapy.

Medical therapy involving use of high amifostine and sucralfate has proven to be quite effective in imparting a protective barrier against the early and late short-term effects of radiation therapy. Moreover, research has concluded that use of synbiotics and microbiotics can be used to manipulate intestinal flora to prevent and treat CRP. Sun Pharmaceutical Industries is amongst the leading manufacturers of amifostine drug candidates.

Why is Oral Therapy Radiation Proctitis Treatment Expected to Remain the Most Preferred?

By treatment, oral radiation proctitis therapy is expected to remain dominant, attributed to its non-invasive nature. Amongst all oral treatment option, anti-inflammatory drugs consumption is expected to be the most widespread. Sulfasalazine, balsalazide and mesalazine are some important anti-inflammatory drugs deployed to treat radiation proctitis.

How will the market grow through 2031?

Market growth is expected to accrue significant gains through 2031, attributed to increased prevalence of ulcerative colitis and other radiation therapy-induced lesions and disorders amid rising hospitalization cases for various cancers.

Which region is expected to generate maximum expansion opportunities?

North America is expected to remain a dominant market for radiation proctitis treatment, attributed to a high prevalence rates of prostate and cervical cancers, which necessitate the adoption of radiotherapy procedures.

Which are the different types of radiation proctitis treatment?

Which prominent market players operate across the world?