Consumer demand for natural-based products over synthetic chemicals, as well as a shift in consumer preference for fragrances and exotic scents, are expected to drive market growth.

Aroma chemicals are used to prepare fragrance formulations for consumer goods, such as perfumes, cleaning products, and toiletries. As fragrance also affects the flavor of edible goods, aroma chemicals are also employed to improve taste in processed foods and beverages.

Around 3000 different types of molecules have been used in the creation of fragrance compositions. Aroma chemicals are used in a variety of applications, the most common of which are fine fragrance, cosmetics, and toiletries.

Throughout history, they have also been used as odorizers to impart fragrance to odorless substances that can be dangerous, such as natural gas, propane, and so on. The historical value of the global aroma chemicals market was US$ 5.1 Billion. (2015-2021).

Over the forecast period, the overall market size will be driven by rising demand from the fragrance industry and food and beverage industry, as well as rising consumer spending (2022-2032).

The growing demand for cosmetics and personal care products, such as creams, facemasks, peels, and others, as a result of increased usage among both men and women, will drive the cosmetics market forward. Changes in lifestyle and an increase in per-capita disposable income have contributed to a shift toward natural and organic cosmetics, opening up new market opportunities.

These chemicals are used in these products to create natural scents while maintaining product quality and formulation. As cosmetics have become an integral part of a person's life, major cosmetic manufacturers are introducing new products containing natural ingredients, accelerating their global sales and driving the market growth.

Aroma chemicals are widely used in the production of food and beverage additives, driving market demand

Aroma chemical manufacturers are concentrating on developing natural products that meet stringent environmental standards. Furthermore, as consumers become more aware of the benefits of the products, suppliers have been compelled to maintain high-quality levels by integrating themselves into production.

Aroma chemical manufacturers are concentrating on developing natural products that meet stringent environmental standards. Furthermore, as consumers become more aware of the benefits of the products, suppliers have been compelled to maintain high-quality levels by integrating themselves into production.

Because taste is such an important factor in edible items, aroma chemicals are used to improve the flavor of processed foods and beverages. Natural aroma chemicals are growing in popularity as a result of rising demand for health and wellness foods, government regulations, and a ban on the use of synthetic flavors. The market for aroma chemicals is being driven by the suitability of natural flavors in a wider range of applications, additional health benefits of certain natural flavors, and advanced technological innovation.

Approximately 95% of synthetic chemicals in fragrances are derived from petroleum-based chemicals such as benzene derivatives, phthalates, aldehydes, and others, which are harmful and toxic to human health. Adults and children are both affected by these chemicals, which cause birth defects, cancer, allergies, asthma, and nervous system disorders. Furthermore, some of these synthetic chemicals are listed as hazardous waste by the EPA.

How will the Aroma Chemicals Industry Grow in Europe?

Europe had a market value of US$ 1,810 Million in 2021 and is expected to lead the global market during the forecast period. This is due to the rising demand for fragrance in soaps, detergents, and household products in Germany, France, and the United Kingdom. Furthermore, rising consumer spending on luxury and premium fragrances as a result of higher income levels and a higher standard of living may propel market growth in this region.

Germany is Europe's largest food producer. The country's food and beverage industry offer numerous opportunities for flavor manufacturers because it aids in the delivery of palatability. As a result, it would favor regional growth in the coming years.

How will the Aroma Chemicals Industry Grow in the Asia-Pacific?

During the forecast period, the Asia Pacific market is expected to grow at a rapid pace, at a CAGR of 6.1%. This is due to China's expanding personal care industry. The rising demand for fragrances in China, Japan, and India, as well as the growing importance of organic and natural fragrances, are expected to propel regional market growth. Another factor contributing to market growth is the high spending power of consumers in these countries.

Companies are concentrating their efforts on R&D and business expansion in the Asia Pacific region. For example, in September 2019, Firmenich, a flavor, ingredient, and fragrance manufacturer, opened an innovative Fine Fragrance Atelier in China. Customers in China and around the world have easy access to all of the fine fragrance products offered by the company.

The North American aroma chemicals market will grow at a CAGR of 5.6% from 2022 to 2032. Rising consumer awareness about the importance of maintaining a healthy and sanitary environment in their surroundings is expected to drive demand for toiletries products such as soaps, detergent, sanitizers, disinfectant floor cleaners, and toilet cleaners, among others, which will drive demand for aroma chemicals over the forecast year.

Because of the growth in the personal care and cosmetics industries, the United States held the largest share of the North American market in 2020. A rise in per-capita disposable income is likely to fuel the expansion of the personal care, cosmetics, and food and beverage industries, while growing health-conscious consumers will strengthen the region's market position. 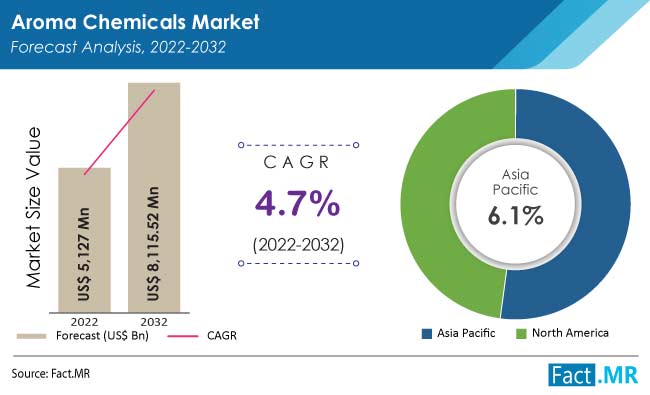 In 2022, the synthetic source segment is expected dominate the aroma chemical market, accounting for 69% of total revenue. In the coming years, the synthetic segment is expected to dominate the market. Synthetic aromas are a critical component for manufacturers in the cosmetics, personal care, and food and beverage industries. They can replicate the scent of natural foods in the food industry for snacks, carbonated sodas, and candies.

Many fragrance manufacturers rely on synthetic chemicals to produce a strong natural scent without jeopardizing the properties of other chemicals used in fragrance formulations. Natural scents in cosmetics are becoming increasingly popular. However, due to the risk of skin sensitivities and allergies, producing natural ingredient cosmetics is not feasible, forcing manufacturers to produce products containing synthetic chemicals.

The aroma chemicals market is divided into terpenes or terpenoids, benzenoids, musk chemicals, and others based on the product. Terpenoids will be the most important chemical segment in 2020. They have medicinal properties such as anti-carcinogen, antimicrobial, and antiseptic properties. Terpenes have a pleasant aroma and are used in a variety of flavorings and fragrances. Terpenoids and their derivatives, which have anti-carcinogenic, antimicrobial, and antiseptic medicinal properties, are used in antimalarial drugs such as artemisinin.

The segment's growth will be aided by rising demand for terpenes in the pharmaceutical, cosmetics, food, and other industries. Musk chemicals can be obtained synthetically or naturally. They can be found in a variety of products such as personal care and cosmetics, food, household goods, and soaps and detergents.

The majority of the industry's major players have been around for a long time and have large production capacities. As a result, in order to meet the growing demand from end-use markets, they are focusing on product launches, expansion, and acquisitions.

At what value is the aroma chemicals industry likely to close by 2022?

Fact.MR foresees the aroma chemicals demand to reach US$ 5.12 Billion in 2022

At what percentage will the market for aroma chemicals rise until 2032?

What is the expected market value for Aroma chemicals in 2032?

What is the growth rate of North America aroma chemicals market?

According to Fact.MR, the North America aroma chemicals market is forecast to grow at a CAGR of 5.6%.

The pre-dispersed rubber chemicals market is likely to witness steady growth during 2020- 2030. Risi...

Bio-based Platform Chemicals Market to reach a valuation of US$ 23 million with demand for C-5 platf...