DNA probes are stretches of single-stranded DNA, utilized to identify the presence of complementary nucleic acid sequences (target sequences) by hybridization. Marked with a label like color or fluorescence, they allow researchers to detect a distinct sequence of DNA in a mixture. Firstly, the DNA sample is heated to separate the DNA strands after which the probe is applied.

The growing adoption of DNA probes in new disease identification has led to investments and foray of new players. Fact.MR, a global research and consulting firm, in its new report analyzes the DNA probes based diagnostics market in detail, offering comprehensive coverage on the key success factors.

DNA probes based technology is being extensively employed in diagnostics as well as in other fields such as micro-fabrication, data handling, molecular biology, instrumentation development, biological sample preparation, and surface chemistry.

Rising public awareness for this technology for prenatal diagnosis and carrier detection is growing rapidly and is expected to result in a significant increase in the demand for such services in the coming years.

DNA probes based diagnostics market is presented with a lucrative expansionscope, attributed to burgeoning healthcare expenditure across countries.

The World Health Organization’s Global Spending on Health: Weathering the Storm reportrevealed that global spending on reached US$ 8.3 Tn between 2000 and 2018 representing 10% of global GDP.

Findings reveal that out-of-pocket spending has persisted in low and lower-middle-income economies, representingover 40% of total health spending in 2018.This rising healthcare expenditure is augmenting the demand for DNA probes based diagnostics.

As countries converge on healthcare, the number of hospitals, clinics, and laboratories is rising.

According to EHealthinsurance, in 2019, there were 6000 hospitals in the US. In 2020, the count reached 6,146, according to the American Hospital Association. This is aggrandizing demand for DNA probes for various operations.

What is the Potential of DNA Probes in New Disease Identification?

W.H.O has declared that, presently, antibiotic resistance is among the biggest threats to global health.

New resistance mechanisms are developing and expanding globally, hampering the ability to treat general infectious diseases. Consequently, DNA probes based diagnostics are gaining immense popularity for their precise detection of these infections.

According to the Review on Antimicrobial Resistance, annual fatalities attributed to antimicrobial resistant infections will rise from the existing 700,000 to 10 million by 2050 unless preventive measures are effectively implemented.

Potential advantages include rapid detection and identification of infectious agents; ability to screen selected specimens using batteries of probes and detection of non-viable or difficult to culture organisms.

The Opportunity Created by Geriatric Population

Globally, the elderly population is rising due to declining fertility rates increased life expectancy. As people age, they experience several health issues. According to W.H.O, the world's population aged 60 years and older is expected to reach 2 Bn by 2050 which will be a rise from 900 Mn in 2015.

What are the Key Challenges for the Market?

While DNA probes have been a welcome development in the global healthcare industry, there are potential associated demerits which are likely to hamper future expansion of the market. In numerous instances, differentiation between species is problematic while using 16S rRNA sequences due to similarity.

The global standard library of rRNA sequences is constantly expanding and continuously being updated, making it difficult to dismiss possibilities of a random hybridization event between a specifically designed probe and an undesired target organism.

Apart from this, recombination between the marker and disease alleles, and incorrect pedigree data or non-paternity leads to erroneous diagnosis. These factors are hampering the growth of the market.

Why US Remains Key to Growth?

US is an attractive market for DNA probes based diagnostics. High incidence rate of genetic disorders in the country, leading to birth defects, developmental disabilities, and other metabolic syndromes are some of the factors attributable to the growth in the US. 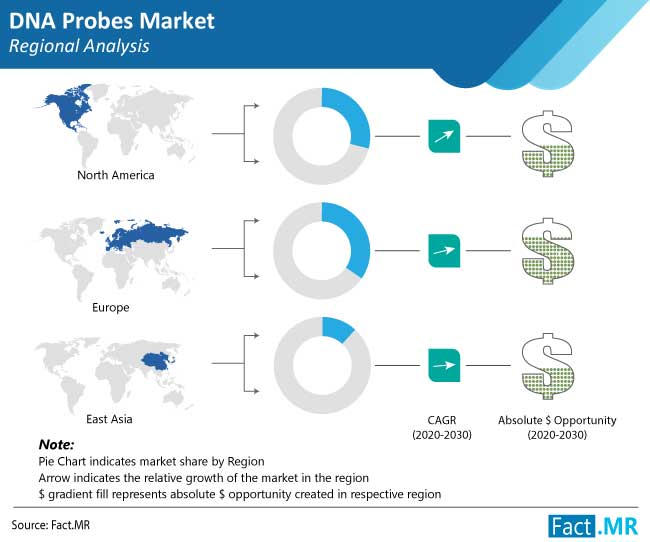 The Centers for Disease Control and Prevention (CDC), in the U.S., advocated that about 3% to 4% of newborns were born with genetic abnormalities in 2017.Besides, the rising cancer cases in the country are further increasing the demand for DNA probes based diagnostics.

Why is Consolidation in India Key?

India is a lucrative market, forecast to showcase notable growth in forthcoming years. The market in India is growing in terms of revenue generation due to the presence of supportive government initiatives which are leading to an increase in investments by key players and governments.

Increasing prominence of mergers and acquisitions in the healthcare sector are also supporting the growth of the market. According to the India Brand Equity Foundation (IBEF), the value of hospital merger and acquisition (M&A) jumped by a record 155% and reached US$ 1.09 Bn in 2019.

On September 23, 2018, the Government of India started the Pradhan Mantri Jan Arogya Yojana (PMJAY), to give health insurance worth US$ 7,124.54 to more than 100 Mn families every year. With rise population, the number of infectious and other diseases is also rising. Owing to this, the market in India is expected to grow at a significant rate in the coming years.

China is a growing market for DNA probes based market. According to the Centre for Economics and Business Research, China’s economy is about to overtake the U.S’s economy faster than previously in the coming years. As economic growth is inextricably linked with healthcare, an upward trajectory is anticipated in forthcoming years.

Besides, rising initiatives to strengthen healthcare sector is another factor stimulating the demand for DNA probes based diagnostics. In 2016, to handle crowded hospitals in a better way, the government initiated 13th Five-Year Plan (2016-2020) and its Healthy China 2030 strategy.

How is France Emerging as a Lucrative Market?

Increasing incidence of infectious diseases is another reason behind the growth of the market. According to W.H.O, on 13 October 2020, the health authorities of France officially announced 13 laboratory-confirmed cases of Mayaro fever in French Guiana, France, which is likely to create several growth opportunities in coming years.

Besides, rising cases of infection and elderly population shall augment demand for DNA probes based diagnostics. Studies estimate that in the coming decades, the share of the French population that is aged 65 and older will rise steadily and will reach about 25% in 2030 and about 30% in 2050.

What are the Reasons behind the Growth of Market in Germany?

Germany is an attractive market for DNA probes based diagnostics. Eurostat projected the net healthcare expenditure in Germany at US$ 454.01 Bn in 2017, the highest among all European Union Member States.

According Visa Guide World, nearly 19.4 Mn citizens received in-patient treatment in 2017. The total that hospitals spent for in-patient treatments during 2017 was about US$ 112.33 Bn. According to the Federal Statistical Office, this expenditure increased by 3.9% compared to 2016 which was US$ 108.3 Mn. About 30% of healthcare expenditure in Germany is directly given to hospital services. Such activities in the country are support the growth of the market in Germany.

According to an OECD publication, recent reforms in healthcare spending, such as the one on long-term care (LTC) spending has generated white spaces for DNA probes market proliferation. The contribution has increased from 1% of gross income to over 3% presently. Additionally, there is a new evaluation instrument consisting of six modules.

What Prospects abound for the UK Market?

The UK is likely to generate substantial growth opportunities across the 2020-2030 forecast period. According to UK’s Office for National Statistics (ONS), people aged 65 years and over in the UK are projected increase by 8.2 Mn in the next five decades.

Widening healthcare industry of the country is also augmenting the demand for DNA probes based diagnostics in the UK. ONS also stated that, in 2018 government-financed healthcare expenditure increased by 2.0%, while non-government healthcare financing increased by 7.6% due to a rise in out-of-pocket spending.

Apart from these, several government initiatives in the UK are benefitting the market. For instance, it was announced in September 2020 that US$ 39.37 Mn will be funded to develop revolutionary technological approaches to transform healthcare in the UK by 2050.

This initiative promotes ambitious R&D roadmaps and underlines commitment to back incredible scientists and researchers and investment in ground-breaking research to take the UK to the leading position with cutting-edge discoveries.

What is making Italy Emerge Stronger?

Italy is an important market for DNA probes based diagnostics. Its Servizio Sanitario Nazionale offers support to citizens for availing maximum hospital and medical benefits. Healthcare is considered a fundamental right in Italy, with the national health plans accessible to all, including overseas citizens.

Additionally, the World Health Organization ranks the Italian healthcare systems as the 2nd best in the world.

As population growth increases, the burden of genetic, chronic and infectious diseases is also increasing. The Italian National Institute of Statistics estimated a total of over 60 million people as of January 2019. The increase is due to immigration. Total number of foreign nationals grew by 43,480.

Which is the Primary DNA Probes Application Area?

Apart from this, the cancer segment is also exhibiting significant growth. WHO stated that by 2030 between 10 and 11 Mn cancers will be diagnosed each year in low- and middle-income countries.

Additionally, between 2008 and 2030, the number of new cancer cases is anticipated to rise by more than 80% in low-income countries. Such a rise in cancer cases will directly augment the demand for DNA probes based diagnostics.

With a rising elderly population and growing cases of infectious diseases and cancer, the DNA probes based diagnostics market is getting more competitive. The market is witnessing the entry of several newcomers. Consequently, established players are trying to hold their position by launching innovative products after comprehensive R&D.

Leading market players are also adopting key market strategies such as mergers and acquisitions to strengthen their positions. In 2011, Beckman Coulter was acquired by Danaher, a company that designs and produces medical, industrial, and commercial products and services.

What are the key trends in the DNA probes based diagnostics market?

Rising healthcare expenditure in the countries, elderly population, and incidences of infectious diseases are augmenting the demand for DNA probes based diagnostics market.

Which are the top companies in the DNA probes based diagnostics market?

What are the key challenges witnessed in the DNA probes based diagnostics market?

The key limitation associated with DNA probes based technology is genetic heterogeneity. This is one of the key challenges for the players operating in the DNA probes based market. Apart from this, recombination between the marker and disease alleles,

Based on Application, Which Segment is Likely to Witness a Surge?

Diabetes Diagnostics Market to grow at steady CAGR growth during 2020-2030. Europe will be attractiv...