Diabetes Diagnostics Market: About the Report

Demand for diabetes diagnostics is expected to rise in response to surging hospitalizations amid the COVID-19 surge. Studies identifying diabetics at higher risk of getting critically ill if infected by the virus are fuelling demand for various related products, including diabetes test strips.

Fact.MR, in its recent report, has projected that demand from hospitals will continue increasing through the forecast period from 2020 and 2030. Government funding towards building hospitals to make healthcare better accessible in rural areas will aid overall expansion of the market. North America, Asia Pacific, and Europe will be attractive regions for players in the global diabetes diagnostics market through 2030.

Driven by the increasing incidence of diabetes, the global diabetes diagnostics market is exhibiting notable growth. According to the World Health Organization (WHO), 422 million people around the world have diabetes. Prevalence of diabetes is higher in low- and middle-income countries, as per the WHO’s findings. Besides this, diabetes also is identified as a principal reason behind rising kidney failure, blindness, heart attacks, stroke, and lower limb amputation cases.

According to Fact.MR, the rising incidence of diabetes is expected to fuel the demand for better-performance and smarter diabetes diagnostics to increase significantly between 2020 and 2030.As per the WHO, globally, over 1.9 billion adults aged 18 years and older were overweight in 2016.

Of these, more than 650 million adults were obese. Obesity is known to be one of the key conditions that can lead to diabetes. Higher prevalence of obesity will therefore stoke growth opportunities for the diabetes diagnostics market.

Nanotechnology is at the forefront of technologies that are forecast to offer a reliable methodology in the early and precise diagnosis and treatment of diabetes. Several benefits of nanotechnology, such as drug release control and target specification, are driving experts to develop advanced glucose detection and insulin delivery methods using nanotechnology. Such advancements are likely to boost the growth of the global diabetes diagnostics market.

Nanotechnology gives access to advanced sensing technologies to provide timely and more accurate information on diabetes. A pair of researchers from the Oregon State University College of Engineering developed means to print transistor-based glucose sensors onto a catheter attached to a wearable pump. This technology allowed diabetics to program the pump to deliver glucagon and insulin at precise doses and time.

A slew of studies similar the one mentioned are undertaken in the last few years to study the use of nanotechnology in diabetes. A common aim of these researches is to offer timely and accurate diagnosis. Spurred by this, the diabetes diagnostics market will exhibit significant growth over the coming years.

The diabetes diagnostics market is hampered by lack of awareness about diabetes and its effects. In 2015, according to UK National Health Service (NHS), nearly 3.9 million people were diagnosed with diabetes, and more than 590,000 people were unaware and undiagnosed. This might restrict the overall growth opportunities for the market.

North America is one of the most attractive markets for diabetes diagnostics. Rising healthcare expenditure is one of the biggest factors accountable for the region's exceptional growth. For instance, in 2019, Canada's per-capita spending on health ranked 11th amongst health-care systems in the Organization for Economic Co-operation and Development (OECD).

Besides this, increasing Food and Drug Administration (FDA) approvals to some of the leading market players in countries such as the U.S. and Canada are also boosting the growth of the diabetes diagnostics market in North America. For instance, in February 2020, Abbott obtained FDA permission for the use of FreeStyle Libre 14-day Flash glucose monitoring systems in hospitals and clinics.

For instance, the New Rural Co-operative Medical Care System (NRCMCS) is intended at making the healthcare system more affordable for rural people in China. It covered nearly 98% of rural residents in 2018. Such initiatives towards the developing healthcare sector in underdeveloped areas of the developing countries are promoting diabetes diagnostics market growth.

Besides North America and Asia Pacific, Europe accounts for a sizeable share of the global diabetes diagnostics market. Growth witnessed in the region is primarily due to the growing diabetes cases in the region. According to the WHO, deaths caused due to diabetes are expected to double by 2030 as compared to 2005.

Furthermore, increasing projects towards the expansion of healthcare are likely to augment market growth. For instance, the NOVEL project is intended to transform healthcare in Europe. The European Union's Horizon 2020 funded the NOBEL Coordination and Support Action. Such projects are expected to fuel demand for smarter diabetes diagnostics during the forecast period. 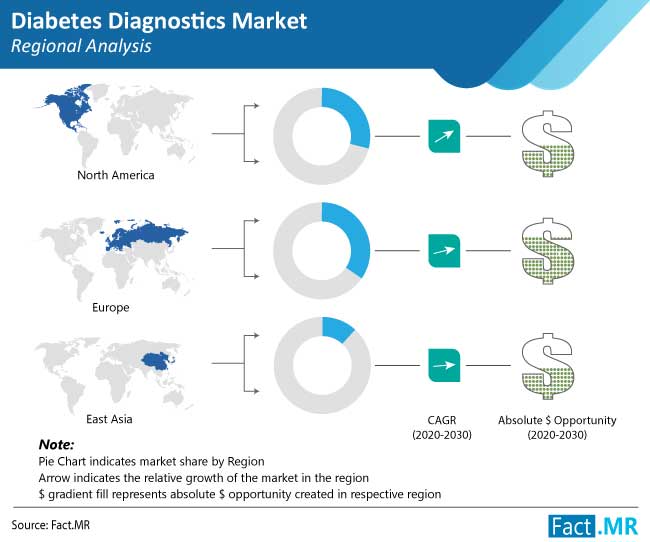 According to Fact.MR, the test strips segment is forecast to witness surging demand during the assessment period, in terms of product in the diabetes diagnostics market space. Test strips manufacturers are increasingly launching low-cost products. Besides this, rising investment is propelling growth within the segment.

For instance, In June 2018, LaunchByte, an investment company, invested in StripSupply, a Boston-based blood glucose testing Product Company. This investment helped StipSupply in stimulating the development of low-cost test strips, and their production and sales.

Besides this, the continuous glucose monitors (CGM) segment is also expected to showcase noteworthy growth owing to the development of smarter CGMs. Moreover, the growing interest of players in collaborations is also supporting the growth of this segment. For instance, Medtronic Plc partnered with Eris Lifesciences to produce a smart continuous glucose monitoring system in January 2019.

Based on end user, hospitals are likely to account for a sizeable share of the market in terms of market value. Growing number of hospitals and the rising number of facilities across the world are key factors behind the growth of this segment.

Besides, rising government expenditure on healthcare is augmenting the demand for diabetes diagnostics in hospitals and among other end users. For instance, according to National Health Expenditure Accounts (NHEA), health care spending in the U.S. grew 4.6 percent in 2019 and reached $3.8 trillion or $11,582 per person. Such rising spending coupled with increasing healthcare awareness is driving more patients to diabetes diagnosis, which is benefitting the market.

The market for diabetes diagnostics is getting extremely competitive owing to the rising cases of around the world and increasing willingness among patients to spend on advanced healthcare. With rising number of new entrants in the diabetes diagnostics market, established players are focusing on technological advancement and frequent new product launches to maintain their positions.

For instance, in June 2018, Senseonics gained FDA's permission for its Implantable Eversense Continuous Glucose Monitoring (CGM) system in the US. This long-term system is one of the major discoveries of diabetes devices. The device monitors blood glucose levels for 90 days without the use of lancets and is gaining immense popularity among patients.

Besides this, leading players are focusing on collaborations to expand their regional footprint. For instance, in January 2020, LifeScan, a US-based company entered into collaboration with DKSH, a company specialized in market expansion services, especially in Asia Pacific. With this partnership, DKSH will provide supervisory assistance and distribution and logistics for the sales of LifeScan products in other countries such as Philippines, Vietnam, Malaysia, Indonesia, Thailand, Hong Kong, and Taiwan.

"Companies operating in the market are seeking out opportunities to expand footprint across East and South Asia. As a result they are focusing on launching affordable diabetes supplies to gain competitive edge. Besides this, rising incidence of diabetes will continue supporting the expansion of the market in the region."

Like in other markets, negative impacts of the COVID-19 pandemic are posing numerous challenges to the growth of the diabetes diagnostics market also. Social distancing norms and transportation restrictions imposed by governments have led to a shortage of workers and raw materials. This consequently resulted in disrupting manufacturing activities during the initial phases of the pandemic.

Several international organizations are issuing health advisories to contain the spread of COVID-19. Awareness initiatives undertaken by these organizations are expected to accelerate the market’s growth amid the pandemic crisis. For instance, the International Diabetes Federation has stated that diabetic people are more vulnerable to becoming critically ill if infected by the COVID-19 virus. Hence, growing health awareness and the relation of COVID-19 with diabetes is projected to support the growth of the market.

Fact.MR has studied the diabetes diagnostics market with detailed segmentation on the basis of by product type, end user, and key region.

Which region is the most attractive market for Diabetes Diagnostics Market?

North America is one of the most attractive markets for diabetes diagnostics.

Which segment to see huge demand in diabetes diagnostics market?

According to Fact.MR, the test strips segment is forecast to witness surging demand during 2020-2030.

Cervical Dysplasia Diagnostics Market to grow at over 7% CAGR during the forecast period, 2021 to 20...

Melanoma Cancer Diagnostics Market is being driven by a growing emphasis on early detection and prev...