Increasing popularity of organic products across the world is anticipated to drive demand for non-GMO ingredients such as non-GMO salt, non-GMO rice, non-GMO corn flour, and other non-GMO products over the coming years.

Non-genetically modified flour is obtained by milling non-GMO grains and is obtained through minimal processing methods. Organic non-GMO flour has many health benefits such as low gluten content, promoting the removal of bad fat, helping in lowering cholesterol levels, and also has a longer shelf life than traditional flour.

Increasing prevalence of cardiovascular disorders is anticipated to promote the consumption of non-GMO flour as it helps in the reduction of cholesterol which could lead to cardiovascular complications.

Rising consumer preference for organic products, rising demand for non-GMO ingredients from the millennial population, the growing popularity of plant-based and vegan foods, and increasing focus on fitness are other crucial factors that could potentially drive non-GMO flour demand through 2032.

Increasing availability of plant-based foods is expected to favour non-GMO flour sales across the forecast period. As such, the market for non-GMO flour is predicted to expand at a CAGR of 3.2% from 2022 to 2032. 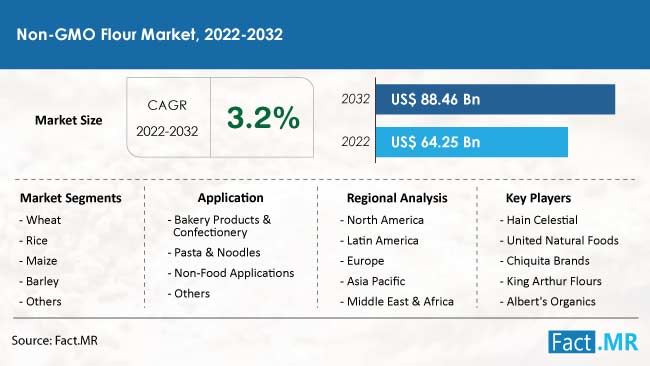 Consumers across the world have become more health and fitness conscious than ever before and this has increased the demand for organic products as people avoid synthetic and chemical-based products. Initiatives to promote the consumption of organic foods are also expected to drive demand for non-GMO flour across the forecast period.

New market players can target investments through such funding rounds and advance their research and development of novel non-GMO products. New brands can also focus on crafting creative marketing strategies to increase the awareness of organic products and drive their sales potential.

Analysts at Fact.MR, a market research and competitive intelligence provider, have analyzed key market trends that would be crucial for new entrants to create and enhance their market presence.

The North America non-GMO flour market is expected to be lucrative for non-GMO flour suppliers over the forecast period owing to the increasing popularity of veganism and rising demand for organic products.

Currently, sales of non-GMO flour in North America account for a valuation of US$ 16.51 billion and hold a market share of 25.7% in the global industry landscape.

Non-GMO flour market in Europe holds a revenue total of US$ 15.09 billion in 2022 and accounts for a market share of 23.5% in the global marketplace. Consumers in this region are shifting their preference toward non-GMO flour instead of GMO flour owing to increasing health consciousness.

High consumer spending potential and the presence of key non-GMO product suppliers in this region are other factors that drive market potential in Europe throughout the forecast period.

The Asia Pacific region is expected to witness a steady increase in demand for non-GMO flour over the coming years as the popularity of veganism and plant-based foods increases among the millennial population.

Increasing availability of non-GMO ingredients such as non-GMO wheat flour, non-GMO whole wheat flour, non-GMO almond flour, etc. in this region is also expected to favour market potential. The market in China stands at a value of US$ 3.66 billion at present and holds a market share of 5.7% in the global industry landscape.

The global non-GMO flour market stands at US$ 64.25 billion at present.

China accounts for 5.7% share of the global non-GMO flour market.