Worldwide demand for zein protein is predicted to increase at a CAGR of 5.3% over the next ten years. At present, the global zein protein market is valued at US$ 2.17 billion and is expected to reach US$ 3.76 billion by the end of 2032.

Growing preference for natural zein protein among consumers due to its gluten-free nature is expected to boost market value substantially over the coming years, with North America and Europe together accounting for over 50% market share.

According to Fact.MR, a market research and competitive intelligence provider, worldwide consumption of zein protein is projected to rise at a CAGR of 5.3% from 2022 to 2032.

Corn contains zein protein, a type of prolamine protein, which accounts for over half of the protein in maize/corn. The product is a water-soluble protein made from maize gluten. Zein and related resins' ability to create durable coatings that can fend off microbial attacks is anticipated to increase the product's commercial desirability. 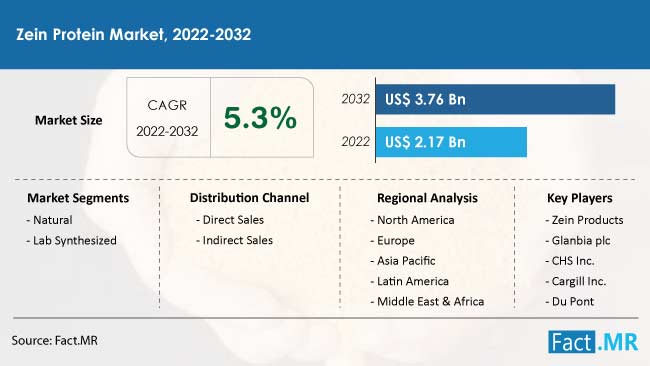 Rising trend for organic and natural products has witnessed sufficient demand across the globe. The versatility of this protein is predicted to give a positive impact on the market in terms of volume and value during the forecast period.

Demand for zein protein is rising in pharmaceutical industries because it provides a smooth surface to tablets by utilizing a significantly less amount, which makes it easy to swallow.

Moreover, it is produced from plants, hence, there are limited side effects on the human body. This acts as a major selling point for manufacturers in the zein protein business.

Moreover, consumer inclination for such products is anticipated to bolster the business of this protein over the long-run forecast period. The rising demand of consumers, governments & regulatory bodies to strengthen the integration of zein protein in the pharmaceutical and biochemical industry is anticipated to thrive the zein protein industry over the forecast period

Rapid utilization of proteins such as zein, sericin, and other proteins in cosmetic products is anticipated to bolster the business of zein protein over the forecast period.

How are New Companies Establishing a Foothold in the Zein Protein Market?

Start-ups should concentrate on such breakthroughs and aim to release innovative products, which could increase their potential to generate significant revenue.

Which Regions are Most Profitable for Zein Protein Providers?

Europe accounts for 27.6% share of the global zein protein market. Europe currently accounts for a majority of the demand due to the presence of prominent manufacturers and the rising demand for vegan protein.

In addition, companies including, Flo Chemical are following the online distribution channel, which has witnessed considerable sales throughout the region. Moreover, manufacturers in the region are focusing on expanding their business for satisfying the strong demand from consumers in end-use industries.

North America holds for 24.7% share of the global zein protein market. The U.S. is one of the largest markets for protein globally. Demand for zein protein from the U.S. will be led by the pharmaceutical and food industries. In addition, the use of zein protein in cosmetic products is anticipated to rise over the forecast period.

Which End Use is Expected Drive High Market Growth?

Based on end use, the zein protein market is classified into food, pharmaceuticals, cosmetics, coating agents, adhesion, and others. The food industry currently holds the highest share of zein protein. This is highly been utilized in the food industry.

This protein is used extensively in coating candies, such as chocolates and jelly beans due to its flavor-enhancing properties. In addition, there is a large number of consumers globally, who prefer plant protein ingredients as substitutes for dairy-based protein and meat, which is poised to surge the demand. The segment is expected to rise as a result of the rising demand for plant-based ingredients in food items.

What is the Competitive Landscape for the Zein Protein Market?

Key market players focusing on continuous research and development activities because of changing consumer preferences for clean-label products. Efforts made by participants to control market demand growth and competition will lead to many key innovations.

Currently, the global zein protein market stands at US$ 2.17 billion.

The China zein protein market is valued at US$ 143.4 million.