This detailed report released by Fact.MR estimates that the lactase enzyme market is set to progress a CAGR of 3.7% and top a valuation of US$ 1 Bn by 2031. Lactase enzymes hold around 10% market share in the global enzymes market.

Lactase is a mammalian enzyme that catalyses the breakdown of lactose into simple sugars glucose and galactose. Lactases are β--galactosidases, which catalyse lactose hydrolysis into galactose and glucose.

Consumption of lactase enzymes has been increasing due to rising consumer awareness about their nutritious and efficient qualities. Key lactase enzyme suppliers have sustained to signify their products in the global market, which has augmented demand for lactase enzymes across the world.

As per Fact.MR, a market study and competitive intellect provider, in the past few years, market value for lactase enzymes increased at a compound annual growth rate of around 2.7%. Rising demand for processed lactose-free products, growing lactose intolerant population, and need for the elderly for easy digestible lactose-free free products are market key drivers.

Overall, sales of lactase enzymes are anticipated to increase at a steady CAGR of around 3.7% over the forecast period. 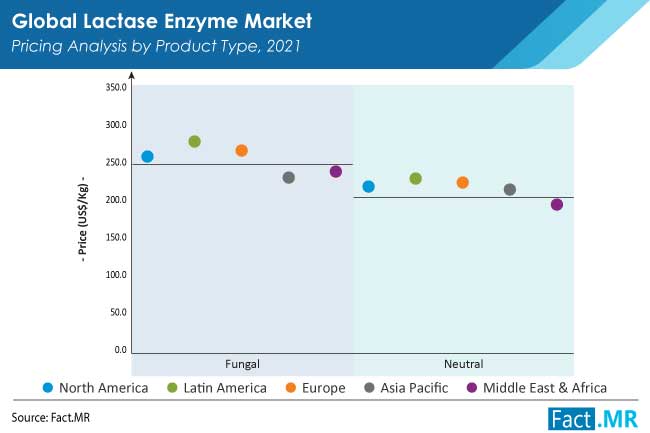 Lactaid, which has lactase, is a widely consumed supplement that is taken as a capsule by individuals, most of whom have lactose sensitivity. Reportedly, numerous individuals value dairy foods, but many are worried about getting sufficient calcium from dairy products. The idea behind this supplement is to take it before lactose-containing meals.

It has been discovered that 5%-23% of the European population suffers from primary lactose maldigestion. Lactose maldigestion is thought to be common in Asia, Africa, the Hispanic population, and India as well, and it is an inherited deficiency. This has led to an increase in the use of lactase dietary supplements, owing to their ease of use and the benefits they provide to the lactose-intolerant population.

Vegan and non-GMO are the latest green badges of food formulation courage. Vegan, like gluten-free, serves as a positive cue for those who are simply friends of vegetarians and vegans. The transition shift from mainstream dairy products, such as cow milk, towards plant-based alternatives, is motivated by health concerns.

Is the U.S. Expected to Witness Valuable Market Growth for Lactase Enzymes?

The U.S. market is expected to witness a notable growth rate of a 3.4% over the forecast period, owing to increased demand for lactase enzymes from dairy product manufacturers.

The U.S. is dominating the North American space with a market share of 89.2% in 2021, but demand for lactase enzymes in Canada is set to witness a lucrative growth rate of 4.7% through the forecast period.

Why is China Dominating the East Asia Market for Lactase Enzymes?

In 2021, IFF stated the unveiling of NuricaTM enzymes in East Asia in China, providing dairy producers with a novel way to produce the finest product that meets customer well-being while boosting sales. NuricaTM is IFF's most recent revolution for the marketplaces in china, and it is sold under the Danisco® brand of food ingredients.

Will Prompt Progression in Production of Lactase Enzymes Propel Sales in Germany?

Prompt progression in the production of lactase enzymes is motivating investigators to achieve lactase enzyme applications for several industries. Experts and researchers are keen on discovering optimal replacements with least side-effects on health, providing a potential market for lactase enzymes.

The study & expansion of lactase enzymes need ample investments in technology. These products have to be developed and produced according to international food and feed regulations. Such advancements by manufacturers is driving sales of lactase enzymes in Germany.

How are Technical Enhancements in Lactase Enzymes Driving Market Growth in India?

According to the most recent assessment by Fact.MR, the India lactase enzyme market size in 2021 is worth US$ 14.1 Mn.

Abundant technical enhancements are relentlessly taking place in the market, as a result of which, the ingredient has been discovered to have properties in various food products, opening opportunities for lactase enzyme products in areas such as bakery, beverages, and dairy products.

Why is There Increasing Sales of Supplements Containing Lactase in Japan?

According to Fact.MR, sales of lactase enzymes in Japan are assessed around 5.4% of the overall Asia Pacific market in 2021, with an expected growth rate of 6.2%.

Japan's population is ageing at an accelerating rate. Currently, 28.7% of the population is above the age of 65. Such a citizenry in Japan tends to buy easy-to-consume food that is also healthy. They favor environmentally friendly products and services. As a result, the country's demand for lactose-free products has increased.

Demand for easily digestible dairy products has forced dairy product producers in the country to include lactase in their product lines, resulting in increased demand for lactase enzymes.

According to the Japan External Trade Organization (JETRO), it was found that, almost 29% of the adult population in Japan belongs to the LOHAS (Lifestyle of Health and Sustainability) category. Further, a breakdown of the adult population into various age groups showed that, preference for organic products is similar, with a higher percentage amongst consumers aged 60 years and above.

Why are Liquid Lactase Enzymes Gaining Traction in the Global Market?

Liquid form of lactase enzyme formulation is appropriate to elders, plus for kids as well. When added to dairy products such as milk, infant formula, and expressed breast milk, there is high strength formula hydrolyses lactose. Vegan and vegetarian customers, both consume a consistent and biologically active source of enzyme.

Why is Food & Beverage Application of Lactase Enzymes Dominating the Landscape?

In 2021, food and beverages accounted for approximately 45.9% of the global market share, and the segment is anticipated to rise at a CAGR of 3.8% over the forecast period.

Fungal lactase enzymes are anticipated to witness a CAGR of 3.8% over the forecast period. Fungal type holds around 77.3% market share in the product type segment.

There is growing recognition that plant-based lactase enzymes are just as beneficial to digestive health as animal-based lactase enzymes. Lactase is active at low pH (3.5-5.5), making it particularly effective at digesting lactose in the stomach, and thus, the perfect dietary supplement for use as a digestive aid.

Fungal lactase compositions have been shown in studies to be useful in supporting digestive complaints by reducing flatulence and bloating in those with low lactase enzyme levels in the gastrointestinal tract.

Leading lactase enzyme suppliers are working on providing products with a variety of claims. Recognized lactase enzyme producers, such as Chr. Hansen Holding A/S and DuPont de Nemours and Company, are aiming to expand their presence in developing countries in Asia Pacific and the Middle East and Africa.

In the meantime, newbies are inventing lactase enzymes for novel applications such as nutraceutical supplements and food supplements. The unavoidable need to obtain accreditations from globally renowned certification bodies, such as Kosher and Halal, may necessitate changes to lactase enzyme manufacturers' manufacturing and/or marketing strategies.

The global lactase enzyme market size is currently worth around US$ 705 Mn.

Lactase enzymes in the making of lactose-free products, especially in dairy, advanced technologies enzymes, and shifting consumer preference toward lactose-free food products are the latest trends being observed in the market.

Companies are choosing to aim at research & development, consolidation of distribution channel in emerging countries, and new product introductions to stay noticeable in the global market.

The U.S. market is projected to expand at a CAGR of around 3.4% over the next ten years.

*69 figures and 34 tables includes by FactMR