Road reclaimer demand is rising as a result of expanding government programs to repair damaged roads, with North America and Europe together accounting for more than 50% market share.

A road reclaimer is valuable engineering equipment used to stabilize deteriorating roads or produce a fresh, reclaimed road surface by pulverizing the asphalt layer and mixing it with the underlying base.

At the moment of pulverization or during a separate mix run, the road reclaimer can also incorporate binding agents, blending cement, foamed asphalt, or other materials.

Growing application possibilities, particularly in the mining, oil, agriculture, and construction sectors, are anticipated to support the development of the road reclaimer market. When the soil base needs to be strengthened or improved, road reclamation is also done for new pavement construction.

Expanding at a CAGR of 3.9%, the global road reclaimer market is projected to reach a valuation of US$ 780.9 million by 2032, reveals Fact.MR, a market research and competitive intelligence provider. 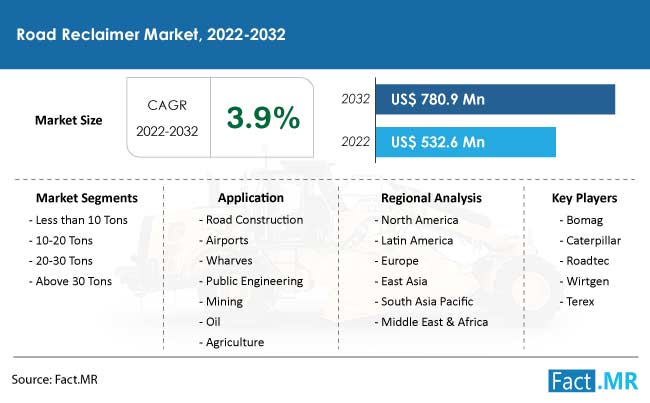 What is Spearheading Growth of the Road Reclaimer Market?

Given that road recycling is a growing trend in the construction business, road reclaimer is quickly becoming necessary and indispensable equipment in road-building operations.

Leading players in the road reclaimer market, including Bomag, Caterpillar, Terex Roadbuilding, Roadtec, Wirtgen, Sakai, and Panien, provide a wide range of models even though they were once thought of as specialised pieces of machinery.

The 21st century is being characterised by an unparalleled growth of roads, according to Global Road Map, an association of geographers, planners, environmental scientists, and agricultural professionals who seek improved planning for roadways.

By the end of 2050, it is anticipated that almost 25 million kilometres of new roads will have been built worldwide, with the majority of these roads being built in developing nations.

According to the Global Infrastructure Hub, there will be a more than 45 percent increase in rural-to-urban migration by the end of 2040, which will result in huge demand for infrastructure support.

The notion of 'smart cities', which make use of the Internet of Things (IoT) and information and communication technology, was inspired by the growing need to manage critical assets of cities, such as water, energy, traffic, and roads (ICT).

Spending on smart infrastructures, such as smart grids and motorways, has increased to ensure sustainable development, riding the coattails of smart city developments. Road reclamation equipment will be in more demand as road construction operations increase.

According to James Cook University researchers, the economy and the environment may both be at risk from the rapid expansion of large-scale road projects around the world.

These researchers have examined massive, ongoing road projects all around the world and have identified critical areas that need to be limited to avoid severe unintended risks and expenses.

Limiting the length-wise scope of new road projects being proposed in high-rainfall regions, particularly in countries of Asia-Pacific, Latin America, and Africa, is the most important of these priorities.

Roads soaked in rainfall quickly produce potholes, landslides, and enormous cracks. The experts claim that a number of highways intended for mountainous, marshy, or damp areas cannot be built purely on the basis of economic considerations.

Sales of road reclaimers will be somewhat affected in the coming years due to growing awareness of the environmental dangers connected with road construction activities in humid tropical areas.

What Strategy Can New Market Entrants Target to Gain a Foothold?

Road reclamation cabs, which were once seen as opulent extras, are now seen as a necessary component by building contractors. In either a recycling or stabilization job site, the workplace for road reclaimer operators is hazardous due to worries about tiny, respirable silica particles that lead to silicosis, a common lung illness.

The development of road reclaimers has also been influenced by these rules, resulting in the inclusion of novel features such as enclosed cab designs, like those found in Wirtgen's new road reclaimers, which also protect operators from the searing heat and UV rays from the sun.

The need for such user-friendly equipment will increase due to increased focus on operator safety, which would have an impact on the growth of the worldwide road reclaimer market.

Which Regional Market is Profitable for Road Reclaimer Manufacturers?

One major reason that is anticipated to propel the road reclaimer market during the forecast period is the increase in infrastructure development globally.

Because of its ongoing infrastructure and building industry expansion, North America currently dominates the worldwide road reclaimer market. It accounts for the lion's share of global revenue production. In 2022, North America is expected to account for 29.3% of the global market share.

The second-largest market in the world has only recently begun to expand into the Asia Pacific region. Significant real estate sector growth and improved infrastructure promote economic progress by facilitating international trade and industrial development, which in turn increases demand for soil stabilizing equipment in China.

The market for road reclaimers is being driven by a surge in public-private partnerships for the construction of public infrastructure systems in nations such as China and India as well as increased government initiatives for infrastructure development.

Which Sectors Make High Use of Road Reclaimers?

Rising application possibilities, particularly in the agriculture, and construction sectors, are anticipated to support the development of the road reclaimer market.

Significant factors supporting the growth of the road reclaimer market include rapid urbanization and an increase in road-building activity. Roads frequently receive a bad rap, so when they become damaged and make travel dangerous, it is vital to replace the surface material.

Road reclaimer demand is rising as a result of expanding government programmes to rehabilitate damaged roads.

The road reclaimer market's growth prospects are projected to be improved by manufacturers' focus on product innovation and the use of new technologies that improve the method, efficiency, and sustainability of road construction.

Companies may also participate in mergers and acquisitions with the purpose of extending their reach internationally, or they may contract with regional distributors and dealers.

The road reclaimer market currently accounts for US$ 532.6 million.

The Asia Pacific market for road reclaimers is expected to surge over the decade.