Urbanization can promote creativity and new ideas, boost productivity, and support long-term growth if it is properly managed. Truck camper sales for individuals or groups are being boosted by the increasing rate and scale of urbanization, with more people looking to get away through recreational activities.

According to Fact.MR, a market research and competitive intelligence provider, worldwide sales of truck campers are projected to rise at a CAGR of 2.7% from 2022 to 2032.

A portable vehicle that goes inside the bed of a truck is called a truck camper. This spare room can serve as a tiny house, complete with a bed, bathroom, and kitchenette. Truck campers should not interfere with your ability to drive, park, or store your vehicle any more than a regular truck would.

They can also detach from their living space, are cheap, and may boondock wherever. Regarding RV possibilities, a truck camper is unrivaled. This is due to several factors, the first of which is that it is less expensive because it is a smaller space. Smaller goods are generally less expensive than larger ones.

Constant demand from the recreational sector coupled with the change in preference of the millennial population will drive sales in the long run. The main factors propelling the growth of the global truck camper market during the forecast period are the rise in investments made by leading experts in emerging economies for the advancement of the transportation sector and infrastructure, continuous construction works, and the launch of innovative truck trailer models. 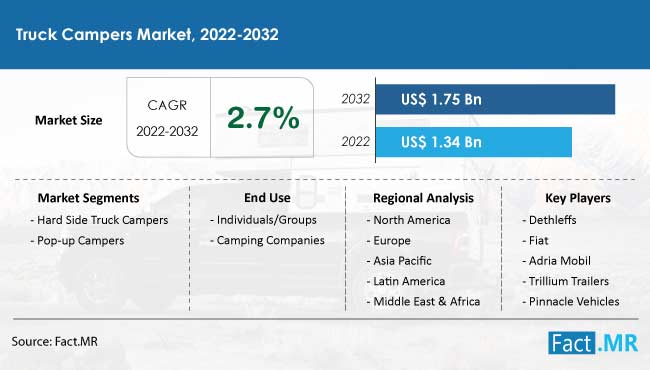 Truck sales are increasing, which is increasing the demand for truck campers globally. Trade between emerging economies' nations and others is actively encouraged. To manage the business effectively and maintain a seamless supply chain, there will likely be an increase in the demand for trucks throughout the projection period.

Unlike gasoline, the use of solar panels can significantly cut the cost of travelling as the need for fuel refilling reduces considerably. Moreover, since the use of solar technology is environmentally friendly, the eco-conscious population is opting for either fully solar-equipped vehicles or rather hybrid vehicles.

Additionally, with the developments in design specifications such as lightweight thin films, it has become relatively easy to carry without impacting the overall efficiency of the truck campers.

The market is anticipated to expand gradually as urbanization and industrialization both increase. Production and sales of industrial trucks are expected to soar during the projection period as a result of increased consumer spending power.

The market is expanding as a result of factors such as the increased demand from the transport and logistics industry, the increasing number of truck camper suppliers, and the automotive industry. Additionally, it is anticipated that in the coming years, the use of automobile software for entertainment reasons will fuel the market for truck campers worldwide.

How Can Start-ups Establish Their Position in the Truck Campers Business?

New entrants are relying on various technological advancements such as the development of truck campers that rely totally on solar energy without affecting the travelling experience. These advancements have been introduced keeping in mind the consumers that prefer zero maintenance and economic travel.

Which Region is at the Forefront of Truck Camper Demand?

North America leads with 64.7% share in the global truck campers market. North America currently dominates the truck camper production and sales owing to the presence of key market players along with the growing trend of the recreational vehicle (RV) lifestyle.

Additionally, well-established on-site truck camper rental mechanism coupled with the change in lifestyle of people is projected to drive the sales in the region.

Moreover, over the past half-decade truck campers industry has seen a significant surge in sales attributed to the constant increase in recreational activities especially, among the millennial population.

Which Type of Truck Campers are Expected to Exhibit Higher Demand?

Hard side truck campers have more qualities, including slide-outs, dry baths, and couches, which contribute to the heavy-duty trucks market expansion.

At present, the global truck campers market is valued at US$ 1.34 billion.

The market for truck campers is anticipated to rise at 2.7% CAGR through 2032.