The global amino acid-based formula market amassed revenue worth US$ 738.4 Mn in 2020. Fact.MR, a market research and competitive intelligence provider, has recently published a revised industry analysis, which estimates the market to rise at a CAGR of 7.4% and be valued at around US$ 1,363 Mn by 2031.

According to Fact.MR analysis, from 2016 to 2020, consumption of amino acid-based formula increased at a CAGR of 6.1%, wherein, countries such as China, Japan, India, Germany, and the U.S. held significant shares in the global market.

Infants suffering from severe allergy to milk and various gastrointestinal conditions, including malabsorption syndrome and food protein-induced enterocolitis syndrome, need proper infant milk formula. Amino acid formula is a type of infant milk formula widely chosen across the globe. Although the taste of this milk formula is not preferred by infants, its exceptional benefits outweigh this minor drawback.

What are the Prominent Driving Factors for Amino Acid-Based Formula Sales?

The amino acid-based formula market is primarily driven by growing concern regarding baby health, including the need for nutritional foods to combat skin diseases.

Promising demand dynamics such as suboptimal breastfeeding rates and fertility rates lead to early dependence on breast milk substitutes. Changes in lifestyles of people across the globe are also driving requirement for infant formula. Working women are highly in favour of infant formula because they get to spend less time with their babies during workdays.

As per the Global Breastfeeding Outlook, 2019 by the United Nations Children's Fund (UNICEF) and World Health Organization (WHO), the rate of breastfeeding remains sub-potential as compared to standard recommendations across the globe.

Why is China a Prominent Market for Amino Acid-Based Formula?

In terms of consumption, China is the world largest market for amino acid-based formula, whereas, the second-largest in terms of production. Over 50% of European infant formula prepared every year is exported to China, and this is so because Chinese consumers still have a preference toward foreign origin food products.

In 2008, in China, over 300,000 children were poisoned after drinking infant milk formula containing melamine. Melamine helps boost the protein level artificially, proven in nutrition tests. Twenty-two companies were subjected to legalities ranging from imprisonment to the death penalty. The melamine scandal still haunts consumers across China, which leads to driving the adoption of amino acid-based formula imported from other countries.

Why is the Amino Acid-Based Formula Market in the Netherlands Anticipated to Grow Much Faster Than the Global Average?

Prominent manufacturers of amino acid-based formula have established their production base in leading European countries, of which, the Netherlands is also one among them. For instance, Danone opened an infant formula production facility in the Netherlands in 2019. The company invested over US$ 275 Mn in establishing the plant.

The Netherlands amino acid-based formula market is driven by increasing investments in infant formula production. From 2016-2020, the market for amino acid solutions in the Netherlands increased at a CAGR of 8.7% and is anticipated to grow faster over the forecast period.

Why is Ready-to-Feed Formula Demand So High?

Ready-to-feed formula is gaining attention across the globe. This is because of the busy lifestyle of people. Mostly in developed countries, women are engaged with scheduled work, which doesn't allow them to spend more time with their family.

Hence, the culture of breastfeeding is reducing to a great extent due to the busy lifestyle of women mostly in countries such as the U.S., South Korea, and Singapore. As a substitute for breast milk, cow milk and goat milk have been chosen by parents globally. But growing allergic problems such as lactose intolerance due to milk drives the requirement for amino acid solutions.

Historically, from 2016-2020, ready-to-feed formula increased at a CAGR 3.2%, considering the global trend of busy lifestyle.

Growing-up milk formula is mostly preferred among all types of milk formula consumed across the globe. This formula held over 45% of the global market share in 2020.

Increasing concerns regarding child health along with growing disposable income has made people shift toward imported growing-up milk formula for the best health benefits to their children. 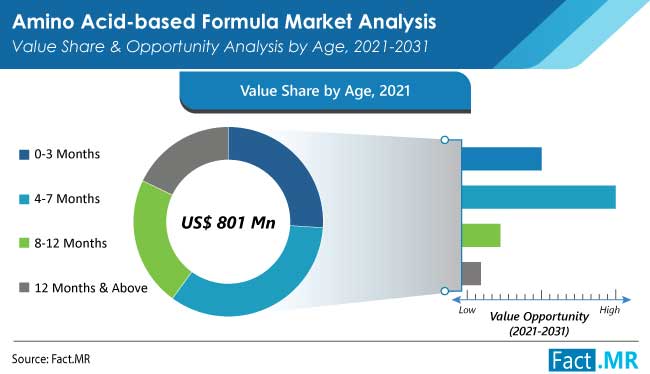 Key amino acid-based formula brands are focusing on increasing their market share in the Asia Pacific and European markets through joint ventures and entering into strategic partnerships with regional players and investment groups.

On the other hand, regional market players are focusing on forging long-term relationships with prominent distributor and pharmaceutical companies to sustain continuous revenue flow. In addition, global and domestic manufacturers are focusing on adopting an alternative way of selling, such as online channels, to gain more coverage in the marketplace.

How much was the global market for amino acid-based formula worth in 2020?

What are the sales projections for amino acid-based formula for the decade?

What is the latest trend related to amino acid-based formula in 2021?

Specialty infant milk formula is gaining in popularity across regions.

What are the primary reasons driving the sales of amino acid-based formula?

Busy lifestyle of women and growing concerns regarding child health are the two prominent factors driving the sales of amino acid-based formula.

How much share do tier-1 manufacturers of amino acid-based formula hold in the market?

Which countries are key demand generators for amino acid-based formula?

How is the North American market for amino acid-based formula performing?

What is the anticipated growth rate for the European market during 2021-31?