The global artificial discs market is currently valued at US$ 905 million and is expected to skyrocket at a CAGR of 20.6% to reach a valuation of US$ 2.3 billion by the year 2027.

Demand for cervical disc replacement is expected to increase significantly at a CAGR of around 21% from 2022 to 2027, attributed to the rise in cervical disc surgeries being carried out across the world.

A disc is a soft, cartilage-like tissue-based cushioning structure that is located between the various spine bones. A material implanted into the spine to mimic the functions of a normal disc is called an artificial disc, spine arthroplasty device, or disc prosthesis. These compressible discs, which are mainly constructed of metal, biopolymer, plastic, or a combination of the two, help to maintain flexibility and range of motion.

Cervical arthroplasty took a long time to reach clinical use due to size restrictions, proximity to the spinal cord, and the intervertebral disc's functional intricacy. In the 1990s, interest in cervical disc arthroplasty increased.

The initial iteration of the metal-on-metal Cummins-Bristol ball-and-socket implant, which required severe disc space displacement during insertion and ultimately caused facet joint rupture, was created in 1991. To address the shortcomings of the first available discs, Bryan later created a new sort of metal-on-plastic artificial disc.

Also, several synthetic discs have been put through a series of FDA-supervised IDE prospective randomised clinical trials. Over the past few years, a large number of innovative artificial discs that are currently being investigated by IDE have created numerous chances for artificial disc replacement industry expansion.

The need to improve industrial operations' safety has increased as a result of an increase in accidents. High-performance rupture discs are becoming more and more in demand. The major rupture disc producers are adhering to the respective rules to expand their market share and product sales globally. Regulatory bodies have developed several regulations to improve operating safety.

The main driver of artificial disc replacement market size throughout the forecast period would be the rising prevalence of orthopaedic illnesses in both developed and developing nations. Many times, upright and bipedal walking, which places mechanical stress on the spinal column, is to blame for degenerative disc disorders (DDD). Age and DDD are directly correlated. Baby boomers are increasingly living sedentary lifestyles and are more susceptible to musculoskeletal ailments, which will spur artificial disc replacement market growth.

According to the artificial discs market report by Fact.MR, a market research and competitive intelligence provider, the global market value for artificial disc replacement is projected to increase from US$ 905 million in 2022 to US$ 2.3 billion by 2027. 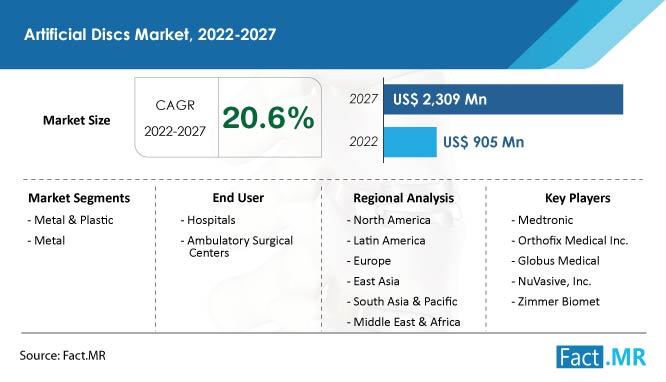 Which Key Dynamics are Supporting Sales Growth of the Artificial Discs Market?

The market for artificial disc replacement is anticipated to expand significantly over the projected period as a result of the increasing older patient population suffering from orthopedic issues. (LBP) low back pain is one of the most prevalent illnesses among the elderly.

The public's growing awareness of technologically advanced spinal discs and the escalating demand for minimally surgical treatments are two significant factors that will fuel the growth of the artificial disc replacement industry. Utilizing cutting-edge technologies such as the Mobi-C multi-level prosthetic disc will be advocated for patients who have complications at two successive spinal discs.

Technological developments are predicted to increase the profitability of the artificial disc market. Precision surgeries and quicker recovery times are being made possible by ongoing technological advancements.

By making a variety of contemporary medicines accessible to their citizens, many developing nations around the world are placing a greater emphasis on enhancing their healthcare infrastructure. Thus, technological innovations are one of the main forces behind the growth of the artificial disc replacement business.

Which are the Pull-Down Factors in the Artificial Discs Market?

The artificial disc market is hampered by high product & operation costs, strict regulatory requirements, and inconsistent reimbursement standards for disc replacements. Surgical risks are yet other factors that provide a considerable obstacle for market participants.

Which Region is Eyed by Artificial Disc Manufacturers?

“Rising Cases Related to Lower Back Problems in North America”

Due to its growing elderly population and greater success rate for artificial disc replacements, North America is anticipated to account for a sizable portion of the worldwide artificial disc market. Due to factors such as the rising prevalence of lower back problems and disorders associated with the spine because of a running lifestyle, the market in the region is predicted to expand significantly over the projected period.

The presence of major firms and hospitals with cutting-edge technologies in the United States and Canada is credited with the region's substantial market share.

A high percentage of the population is over the age of 65, and spinal problems are common, which has led to an increase in the number of disc replacement surgeries in Europe, which accounts for the second-largest market share.

The most frequent of these were surgeries on the intestines, spine using endoscopes, and hip implants.

Over the coming years, the regional market with the fastest growth is expected to be the Asia Pacific. The increasing demand for minimally-invasive surgeries and the efforts made by businesses to increase their regional presence is to account for this growth. It is anticipated that the Middle East and Africa will hold the lowest market share because of their still developing healthcare systems.

Why is the U.S. a Profitable Market for Artificial Disc Manufacturers?

Additionally, the market in the United States will be driven by the companies' organic and inorganic strategies, such as mergers and acquisitions.

Therefore, the aforementioned factors are anticipated to stimulate market expansion, in the coming years.

What is Supporting Artificial Discs Market Growth in China?

Because of the rise in degenerative disc disease among the senior population, the artificial disc market in China is expected to significantly expand. In addition, the rising prevalence of bone problems in the area has compelled top artificial disc manufacturers to create advanced technologies at affordable pricing for use in disc surgical intervention.

Disc placement enhances spine mobility, and the procedure is remarkably a little invasive. The item straightens up abnormalities, joins the vertebrae together, and stabilizes the spine. The success rate of disc replacement surgeries is high in the nation, which encourages the use of artificial discs.

Which Material Type Disc is Most Widely Demanded?

The artificial disc material is segmented into metal + plastic materials and metal materials.

Over the coming years, the segment with the biggest revenue share is anticipated to be composed of metal + plastic material types. Today most cervical total disc replacement prosthetics that are FDA-approved in the U.S. include iterations of inferior and superior implant endplates made of metal alloys that articulate with a central core made of medical-grade plastic. Furthermore, the market is growing because of the high overall success rate of treatments used to replace artificial discs made of metal and plastic.

The metal segment, on the other hand, is anticipated to experience the fastest CAGR throughout the projection period. Due to the ability of metals to remove long-term wear as opposed to metal + plastic materials, this expansion is attributed to the increase in research activities in this sector. Despite the vast prospects in this market segment, product recalls have caused it to hold the second-largest market share.

A damaged or degenerative disc is removed during a cervical disc replacement procedure and replaced with an artificial disc implant. The discs in the neck act as a cushion or shock absorber between the vertebrae (cervical spine).

As a result, the growing elderly population could fuel demand for therapies connected to the vertebra and propel the segment forward. The market will also be driven by measures taken by the major market players to treat cervical chronic pain.

The absence of bone fusion in lumbar disc replacement procedures results in a quicker recovery period than with other spinal surgeries, which is anticipated to have a beneficial effect on market growth. During the projection period, it is also anticipated that expanding technological developments and research in the field will accelerate the segment's expansion.

The presence of several key players in the artificial disc replacement market is moderately competitive. The market is in a boom period, as major firms are concentrating on mergers and acquisitions. Companies are making strategic decisions on both organic and inorganic expansion to broaden their product offerings and increase their market share.

The artificial discs market is currently valued at US$ 905 million and is expected to reach US$ 2.3 billion by 2027.

A device implanted into the spine to mimic the functions of a normal disc is called an artificial disc, spine arthroplasty device, or disc prosthesis.

Demand for cervical disc replacement is expected to increase at a CAGR of 21% and reach US$ 1.7 billion by 2027.

Sales of artificial discs are expected to increase at 15% CAGR and reach US$ 382 million by 2027.