The global autonomous farm equipment market is projected to expand at over 10% CAGR through 2031, and top a market valuation of US$ 150 Bn by 2031. Incorporation of Artificial Intelligence (AI) has brought about drastic changes in autonomous farm equipment, while recovery of the agricultural industry is forecast to pave new paths for suppliers over the coming years.

With growing inclination towards partially and fully automated tractors, harvesters, and other farm equipment, manufacturers are investing more in research & development (R&D) activities in order to capitalize on the upcoming opportunities.

The latest report on autonomous farm equipment by Fact.MR provides a holistic overview on the global industry along with key drivers & restraints and demand-supply patterns across the globe for the forecast period of 2021 to 2031. According to the report, leading regions such as North America, Europe, Asia Pacific, and Latin America will take center stage for autonomous farm equipment providers, while new innovations will further cater to their growth in the near future.

Demand for efficient and reliable farm management solutions has become more prominent than ever, while technical advancements and adoption of artificial intelligence has played a vital role for suppliers. Though demand from the agriculture sector declined temporarily due to the onset of the COVID-19 pandemic in 2020, the industry has maintained an overall positive outlook during the last 5 years from 2016 to 2020.

Autonomous farm equipment, being highly efficient in saving time and cost in yielding, crop monitoring, and field & soil analysis, is gaining traction around the world. As requirement for autonomous tractors equipped with auto-steering and auto data collecting systems is becoming prevalent, industry players are subject to witness sky-high demand over the coming years. According to Fact.MR, the autonomous farm equipment market is predicted to ascend at more than 10% CAGR over the next ten years.

Adoption of artificial intelligence is favoring autonomous farm equipment manufacturers owing to its unlimited advantages, such as-

The European Commission (EC) puts forward a European approach to artificial intelligence (AI) and robotics in order to boost farming and precision agriculture. The EC has also taken an initiative to develop Life Cycle Assessment (LCA) framework for product optimization in the agriculture sector. Such initiatives are further strengthening the base of potential industry players.

What are the Key Challenges Faced by Manufacturers?

Despite being highly sought-after for their efficiency and precision, there are a few restraining factors faced by autonomous farm equipment manufacturers. For instance,

Also, the outbreak of the pandemic affected manufacturing companies due to shortage in supply of raw materials, unavailability of labor, financial crisis, and decline in demand.

However, with the adoption of the new normal and increase in R&D activities to minimize disadvantages, suppliers of autonomous farm equipment are expected to come across higher growth scope over the coming years. 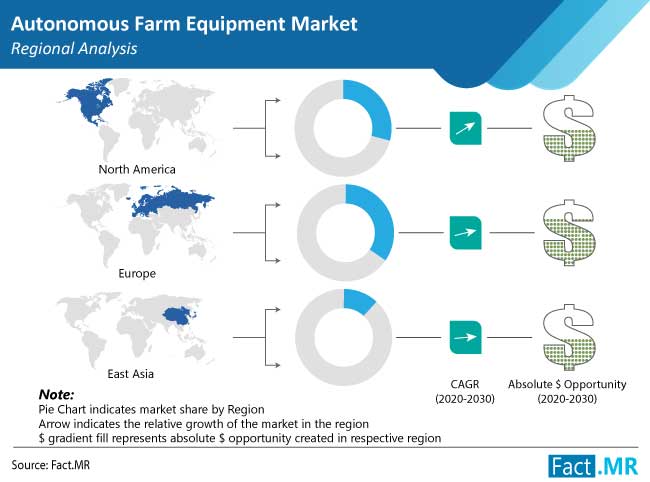 Why is the United States a Huge Market for Autonomous Farm Equipment?

The United States has been leading in the world’s largest autonomous farm equipment market - North America - since the past decade, owing to rise in the adoption of advanced technical solutions in farming. With manufacturers incorporating more cutting-edge features in their products, and the agricultural sector gaining momentum, autonomous farm equipment providers are expected to come across lucrative opportunities in the near future.

According to a report titled “AgriBusiness Spotlight - The Agribusiness Industry in the United States”, published by SelectUSA, the U.S. agribusiness industry is a major competitor in the global industry, accounting for over US$ 159 billion in export sales in 2018. Also, investors in the U.S. agribusiness industry are supported by the U.S. Department of Agriculture’s series, which, in turn, is indirectly favoring autonomous farm equipment suppliers in the country.

Why are Market Stakeholders Concentrating on Germany?

Germany, being at the forefront of Europe’s farm equipment industry, is targeted by potential industry players around the globe. Increase in governmental investments and new initiatives taken to strengthen the agriculture sector, coupled with technical advancements in manufacturing units are driving sales across the country.

As stated in a report published by the Federal Ministry of Food and Agriculture, Germany’s agriculture sector is among the four largest producers in the European Union, while, in order to feed more than 200 million farm animals, around 50% of farmland is made up of grassland and arable land that is used for feeding purposes. As per the report, with annual sales revenues of Euro 11.97 billion, as in 2019, Germany has the largest organic food market in Europe. These statistics reveal why Germany is highly sought-after market by autonomous farm equipment suppliers.

How Lucrative is the Growth Scope in China for Autonomous Farm Equipment Suppliers?

China is at the forefront of the world’s fastest-growing autonomous farm equipment industry - Asia Pacific, and is forecast to register impressive growth in the foreseeable future. Advancements in the agriculture sector and rise in requirement for autonomous farming solutions are bolstering sales in China.

As per a report titled “China’s Plan to Promote Modern Agriculture”, published by The People’s Republic of China, the Government of China took extensive measures in order to develop modern agriculture during the last 5 years. As per the report, national output of grain reached over 500 million tons in 2020, while personal productivity increased to over 40,000 Yuan (US$ 6.146 million), compared to 30,000 Yuan (US$ 4.609 million) in 2015. No doubt that China will be a lucrative market for autonomous farm equipment manufacturers over the years to come.

Why is Demand for Autonomous Farm Equipment High in Japan?

According to a report titled “Japan- Agricultural Sector”, published by the International Trade Administration on 30th October 2020, Japan was the fourth-largest single-country export market for U.S. agricultural products, valued at nearly US$ 11.7 billion, while the largest export growth in 2019 was seen in hay and rice, up US$ 64 million and US$ 43 million, respectively. These figures explain why key industry players are eyeing Japan in order to raise their revenues.

Presently, autonomous tractors and harvesters are highly demanded due to their advantageous features, such as-

According to Fact.MR, these segments will consistently fuel the sales of autonomous farm equipment manufacturers throughout the forecast period.

A recent study by Fact.MR on the autonomous farm equipment market offers a 10-year forecast from 2021 to 2031. The study analyzes crucial trends that are currently determining market growth. This report explicates on vital dynamics, such as the drivers, restraints, and opportunities for key market players along with key stakeholders and emerging players associated with autonomous farm equipment. The study also provides the dynamics that are responsible for influencing the future status of the market over the forecast period.

A detailed assessment of the value chain analysis, business execution, and supply chain analysis across regional markets has been covered in the report. A list of prominent companies operating in the autonomous farm equipment market, along with their product portfolios, enhances the reliability of this comprehensive research study.

A comprehensive estimate on the market has been provided through an optimistic as well as a conservative scenario, taking into account sales during the forecast period. Price point comparison by region with global average price is also considered in the study.

Country-specific valuation on demand for autonomous farm equipment has been offered for each regional market, along with market scope estimates and forecasts, price index, and impact analysis of the dynamics of prominence in regions and countries. For all regional markets, Y-o-Y growth estimates have also been incorporated in the report.

Detailed breakup in terms of value for emerging countries has also been included in the report.

Secondary resources referred to by analysts during the preparation of the market study include statistics from governmental organizations, trade journals, white papers, and internal and external proprietary databases. Analysts have interviewed senior managers, product portfolio managers, CEOs, VPs, marketing/product managers, and market intelligence managers, all of whom have contributed to the development of the research report as a primary resource.

Which are the top companies manufacturing autonomous farm equipment?

Some of the top companies manufacturing autonomous farm equipment are AGCO, Mahindra, Clearpath Robotics, and Agribotix.

Which are some of the lucrative markets for autonomous farm equipment?

The United States, Germany, China, India, Japan, Canada, the United Kingdom, France, South Korea, and a few others are lucrative markets for autonomous farm equipment, and are expected to dominate throughout the forecast period.

Which product accounts for highest sales?

Presently, tractors and harvesters are the most lucrative in terms of product, and are expected to remain dominant over the forecast period of 2021 to 2031.