Autonomous drones have powerful onboard computers that ground controllers can remotely control. Multiple purposes are served by aerodynamic structures in the intended navigation system. In numerous military applications, this technology was developed for risky military missions without endangering human life. Armed with all the necessary missiles to take out specific targets operating at great altitudes, military autonomous drones are available. They are utilized to monitor the behavior of and track down enemy forces.

Massive investments are being made in the research and development of autonomous drone technology by giants like Boeing, Google, Amazon, and Airbus. Its use is growing rapidly in numerous commercial, scientific, recreational, and other public service applications. Based on the above factors, autonomous drone revenue is projected to reach US$ 15,634.7 million in 2023, growing at a CAGR of 19.3%.

From 2018 to 2022, the global market for autonomous drone registered a CAGR of 15.3%. Fact.MR, a market research and competitive intelligence provider, reveals that the market will exhibit growth at 19.3% CAGR between 2023 and 2033. 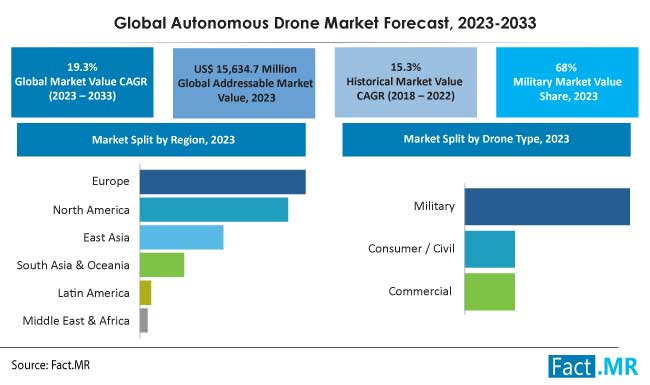 Market share analysis of autonomous drone based on drone type and region is provided in the above image. Under the drone type segment, military sub-segment dominates with 68% market share in 2023.

The market's current dominance by the military sector is anticipated to last throughout the forecast period. Autonomous UAV drones are used by the military for a variety of missions, including air combat and ISR applications.

Governments and businesses are now working to combine existing drones with cutting-edge technologies like artificial intelligence. Both businesses are investing in the creation of new drone models in addition to the autonomous drone models already on the market.

For instance, the Japanese government announced plans to create a domestically produced combat drone in January 2021. The drone was developed in three stages and operates autonomously. Japan's procurement, technology, and logistics agencies are working to develop UAV artificial intelligence (AI), and the government plans to invest approximately US$ 26.2 million in UAV development.

Similar investments by various governments and militaries to increase the autonomous capabilities of unmanned aerial vehicles are expected to spur the growth of the segment during the forecast period.

“Applications of Commercial Drones Can Propel the Sales of Autonomous drone”

Numerous industries have registered the use of drones to collect significant amounts of data needed for the desired strategic decisions. Along with its many applications in the commercial sector, including the building, mining, oil & gas, and agricultural sectors, it has emerged as the market with the fastest rate of growth.

Due to the extensive commercial use of mapping, observation, surveying, and inspection studies, the construction industry is likely to present a significant opportunity for market expansion. In the coming years, the market is expected to grow due to the increasing use of commercial drones.

What Do Autonomous Drone Manufacturers Need to Watch Out for?

Drone Safety and Security Issues Can Hamper the Market Growth”

Information security had been identified as potentially and seriously being at risk from drone use. Numerous drones have serious design flaws, no wireless security protection, and software that encrypts video. Threats could include being vulnerable to technical problems. Application errors, such as lost connections between users' remote devices and drones, can cause technical issues with drones and cause them to crash or take off.

Another technical problem that affects drone flight time is the battery life. The lifespan of batteries decreases, especially in cold weather, which results in a limited flying time and the possibility of malfunction. Therefore, security concerns may prevent the market from growing.

Why U.S. is Expected to Drive Autonomous Drone Demand?

Due to the robust growth of the UAV environment in the United States for the commercial and military sectors, North America held the largest market share in the autonomous drone market in 2021 presently making significant investments in the improvement of already-existing unmanned systems by integrating AI.

The American Department of Defense is attempting to automate UAV swarms by fusing engineering and artificial intelligence. The American military is integrating unmanned aerial vehicles (UAVs) for non-combat purposes in addition to combat and surveillance missions. As a result, it is anticipated that the U.S. autonomous drone market will reach US$ 4,625.70 million by 2023.

Why Chinese Autonomous Drone Market Expected to Be Highly Lucrative?

The market in Asia Pacific is expected to exhibit significant growth owing to the increasing demand for modern warfare autonomous drone system for strategic and tactical applications in the future years. The major importer in the country is likely to secure large revenue in the coming years.

Due to its dense population, China in particular is using drones more and more to develop its next-generation logistics infrastructure. Low prices and lack of export controls could make China the world's leading source of unmanned vehicle systems in the UAV capability market for many countries. As a result, it is anticipated that the Chinese autonomous drone market will be worth US$ 2,156.14 million in 2023.

Why is Military Drone Type a Popular Segment in Autonomous Drone Market?

The military segment is anticipated to hold the maximum share during the forecast period. An increase in the demand for tactical and strategic autonomous drones for military application is driving the segment growth. Several countries have increased their purchase for autonomous drones for special purpose such as Medium Altitude Long Endurance for various missions.

However, operations for border monitoring, surveillance, and border security are set to fuel the demand across the globe. Owing to the above facts, the military drone type sub-segment of the autonomous drone market is predicted to reach the valuation of US$ 10,631.6 million by the end of 2023.

Why Construction & Mining in End Use Industry is Poised to Drive Autonomous Drone Market?

Due to the increased use of drones for visual inspections on construction sites and high-risk areas, the construction drones market is expected to grow at a market share of 6.2% in 2023. Drones' ability to gather real-time data that is very useful for administration and communication increases efficiency.

Mining is considered one of the most dangerous places for workers, especially those working deep underground are exposed to a variety of hazards such as falling rocks, damp conditions, gas leaks, floods and dust explosions. There are applications that use mining drones for surveillance and inspection.

Drones are also used by surveyors and engineers to take aerial photos of construction sites to visualize the progress made on their projects. A project overview facilitates decision-making simplification, which streamlines construction site operations. This would lead to a subsequent rise in demand for construction and mining sector, whose market value is estimated to be around US$ 974.0 million in 2023.

Some of the key developments are :

Over the years, delays in regulatory approval in many countries have forced several industry players whose business models depend entirely on autonomous drone approval to cease operations. Without mass production and demand, companies could not sustain operations over long-term period.

However, with each country now issuing the necessary regulatory approvals for drone operations to be autonomous, players may find it easier to enter and compete in the market. Market participants are concentrating resources and capital on research and development while looking to expand their regional footprint.

Worldwide demand for autonomous drone is anticipated to reach US$ 91,304.8 million by 2033-end.