Worldwide sales of cascara products are currently valued at US$ 458 million. As per forecasts, the global cascara products market is expected to register a CAGR of 10.4% and reach US$ 1.23 billion by the end of 2032.

Coffee producers and processors across the world are eyeing an incremental dollar opportunity of US$ 775 million, which is likely to be created from the demand for cascara products.

Sales of cascara products are likely to create an incremental dollar opportunity of over US$ 700 million between 2022 and 2032, largely attracting revenue for industry stakeholders from speciality or functional food formulations as well as their usage as a key ingredient in personal care products.

Worldwide food producers are eyeing upcycled ingredient business and opportunities created within. Products made from cascara – such as pulp of coffee beans - have gained momentum and have attracted several mid- to large-scale coffee producers and processors.

Cascara is also recognized as coffee cherry, which is harvested by using dry (natural) and wet (washed) processing methods, among which, wet processing is prominently used due to the retrieval of non-degraded peel and pulp.

Earlier, cascara was recognized as a by-product and was generally discarded during the harvesting of coffee beans. Since farmers and coffee processors realized the commercial value of cascara and its products, almost 50% of a coffee by-product that was discarded found their route to the factories of value-added product manufacturers.

Cascara, as a commodity, is used for the preparation of cascara products such as cascara tea, cascara powder, and cascara syrup. Although lack of awareness about cascara and its nutritional value restricts its approval in some regions, in others, it is approved as a GRAS (General Recognized as Safe) product.

Although cascara products are not approved and available in all regions, there is a ray of hope that due to R&D and evolving applications, cascara is anticipated to grow during the forecast period (2022-2032). Brazil, Indonesia, Colombia, and Vietnam are key countries that will accelerate the cascara products market size due to their high production of coffee. 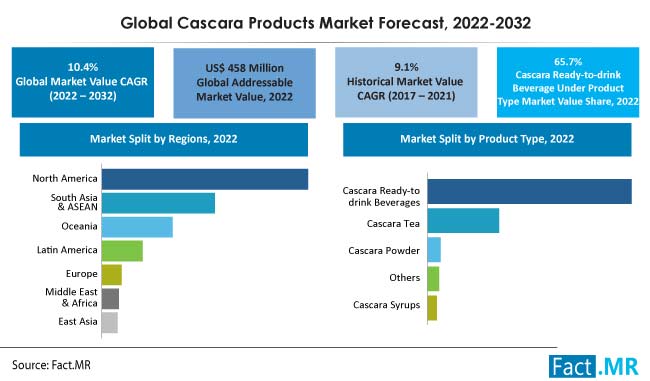 Why is Demand for Cascara Products Expected to Rise Sharply?

Key driving factor of the cascara products market is its high nutritional value. Cascara contains more than 50% of antioxidants, precisely polyphenols. Cranberries have antiviral, anti-inflammatory, antimicrobial, and prebiotic properties. Along with that, it contains a low amount of caffeine than normal coffee beans.

Additionally, many studies have shown that the high consumption of plant-based polyphenols reduces the risk of advanced cancers, diabetes, cardiovascular diseases, neurodegenerative disease, and osteoporosis. Awareness about these benefits will upscale the demand for cascara products in the near future.

High coffee production across the world is a key driving factor behind the production growth of cascara, as it has been seen that 1 ton of cascara is produced in every 2 tons of coffee beans that are processed.

In addition, the top four coffee-producing countries - Brazil, Vietnam, Colombia, and Indonesia - account for more than 70% of global coffee production, and will drive the cascara market substantially over the years ahead.

Major restraining factor for the growth of the cascara products market is the environmental hazards of unexploited cascara; the high humidity in cascara leads to the speedy growth of microorganisms that cause environmental pollution.

The by-products of coffee, such as mucus and pulp, are generally disposed of in water resources such as lakes and rivers, which leads to the deterioration of oxygen in the water and also causes the death of plants.

According to the EU novel food catalogue, cascara is deliberated as a novel food. In February 2022, the European Food Safety Authority approved placing cascara products in the EU market by not taking any objection to product safety. Switzerland approved the use of cascara in June 2020.

In terms of demand for cascara products, North America leads the global market, with the U.S. alone accounting for 40% market share in 2022. The North American cascara products market is forecast to surpass US$ 400 million by 2032, expanding at a projected CAGR of 7.8% over the next ten years.

Latin America, despite being a traditional market for cascara products, hasn’t realized commercial success in traditional food uses. The region accounts for less than 10% of global cascara product demand, and is estimated to be valued under US$ 40 million in 2022.

European countries too are lagging in the adoption of cascara products, and not much activity has been observed there.

On the contrary, East Asian countries have seemed to pick this novel ingredient and companies exhibited an interest in cascara as an ingredient across many categories, including, but not limited to, cascara drinks, cascara cream, cascara syrup, cascara concentrates, and cascara cherry tea.

Among these, cascara tea is gaining traction beyond its usage across traditional countries such as Yemen, Ethiopia, and Indonesia.

Cascara's ready-to-drink beverages segment is considered to be the fastest-growing segment. This will enhance its popularity among global manufacturers and will heighten its production capacity in the near future.

In contrast, cascara powder and cascara syrup are not very popular in the present market scenario; however, it is anticipated that manufacturers will start production to a high extent after getting approval for these product types.

Will Use of Cascara Products as Flavour Enhancements Continue Leading Market Growth?

Cascara contains a high amount of antioxidants that are good for protection from cancer development, osteoporosis, neurodegenerative diseases, cardiovascular diseases, etc. These health benefits will ascribe cascara products demand over the coming years.

Apart from this, many farmers use cascara powder as fertilizers, and this will enhance its demand in the agricultural sector as well going forward.

Manufacturers who have successfully introduced their products in the market are recognized as key market leaders; for instance, Nestle Australia Ltd., Applied Food Sciences, Van Drunen Farms, and Mountain Top Coffee. These established market players have already started the production and sale of cascara products.

For instance, Olam Food Ingredients and Lavazza have submitted their applications for product patents to food authorities and are looking forward to getting the approvals.

At present, the global cascara products market is pegged at US$ 458 million.

Cascara product consumption is anticipated to increase at a CAGR of around 10.4% through 2032.

Key market players are eyeing niche segments and largely upcycled product categories. Most companies represent the coffee industry at one or the other node of the value chain and are willing to exploit the opportunity.

Cascara product manufacturers have adopted an aggressive marketing approach and are continuing the expansion of their existing product portfolio and SKUs.

China is estimated to hold around 10% of the global cascara products market share in 2022.