Surgical procedures for vascular disease indication is expected to garner significant attention, providing fertile ground for market expansion. A new report by Facr.MR tracks the global sales of the venous procedure devices market in 20+ high-growth markets, along with analyzing the impact COVID-19 has had on the healthcare domain in general, and venous procedure device demand in particular.

How Do Historical and Future Projections Compare?

Surging cardiovascular disease incidence in the past few years has greatly enhanced uptake of venous procedure devices, with prominent manufacturers introducing technologically advanced products. The market was valued at US$ 2 billion in 2019, with growth expected to incline further in upcoming years.

Prospects appeared temporarily dim during the initial months of COVID-19, as elective surgical procedures took a backseat. However, since Q4 2020, a gradual upswing with relaxation of restrictions across key healthcare domains. Future expansion will be largely influenced by increased uptake of specialized stents and catheters.

How are Technological Advancements Paving the Way for Future Market Expansion?

Several players are introducing technologically advanced products based on upgraded techniques, enabling precise and improved diagnostics to patients suffering from venous diseases. A major breakthrough in this regard is the development of a centralized administration system.

Why are Clinicians Opting for Advanced Drug Eluting Venous Stents?

How are Product Recalls Impeding the Growth Prospects of Manufacturers?

In the recent past, several venous procedure devices have been recalled from the market due to documentation of undesired adverse patient outcomes. For instance, in 2017, Vascular Solutions Inc. recalled over 7,000 units of its venture catheters due to the presence of excess material at the tip of the catheter which separated during surgery, leading to development of blood clots.

Hence, major medical device manufacturers are subjecting each product to strict inspection and laboratory testing so as to offset any anomaly which may arise during the trials. This prolongs effective availability of key surgical devices, thereby limiting growth prospects for venous procedure devices in the long run. 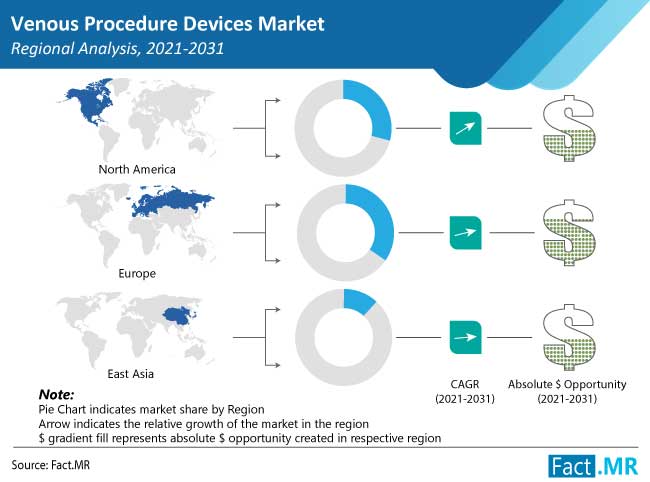 Why is the U.S. a Prominent Market for Venous Procedure Devices?

The US is expected to generate ample growth opportunities for the venous procedure devices market, attributed to increased surgical procedures for various cardiac anomalies. According to the Society for Vascular Surgery, peripheral arterial disease (PAD) affects between 8 and 12 million people in the US, while nearly 200,000 people are annually diagnosed with abdominal aortic aneurysm (AAA).

Hence, prominent healthcare companies are expected to cement their presence throughout the US market, rendering it the most lucrative country throughout North America. Prominent manufacturers include Medtronic Plc., Boston Scientific Corporation, Abbott Laboratories and Cook Medical among others.

According to W.H.O, India reported 63% of total deaths due to non-communicable diseases, of which 27% were attributed to cardiovascular diseases. Hence, the scope for enhanced venous procedure device sales is increasing throughout the country in recent years.

Why is There High Demand for Venous Procedure Catheters?

By product, demand for venous procedure catheters is expected to see considerable incline, with preference for central catheters generating bulk of total demand. Central catheters are more effective in directly administering nutrition and medication directly into the bloodstream.

Central venous catheters are less likely to detach from the vein, permitting patients to remain more active and receive intravenous medication at home. Furthermore, it enables delivery of larger blood quantities to patients in severe shock.

Which is the Most Common Venous Procedure Device Application Area?

By application, chest implants are expected to remain highly utilized in the venous procedure devices domain, particularly in the infraclavicular region. This offers greater convenience to surgeons while operating on a patient.

By indication, vascular diseases are expected to generate significant demand, amid the rising prevalence of deep vein thrombosis globally. As per the Centers for Disease Control and Prevention, approximately 900,000 people are affected by it across the US, with 10-30% succumbing within a month of diagnosis.

Treatment for hemodialysis/arteriovenous fistulae is also anticipated to incline, attributed to its surging prevalence rate in recent years.

Notable developments with regards to key venous procedure device manufacturers are as follows:

*This list is indicative- full details about prominent venous procedure devices manufacturers is available upon request.

According to Fact.MR’s projections, the global venous procedure devices market is expected to post significant gains, reaching over US$ 3 billion by 2031, registering a CAGR of approximately 6% throughout the forecast period. Growth is largely influenced

Yes. The North American market promises to emerge as the most promising landscape, attributed to a surging prevalence rate of peripheral arterial diseases across the United States

*85 figures and 54 tables includes by FactMR