Rising environmental awareness and the need for sustainable development along with government subsidies and supportive measures for electric vehicles are major factors expected to support market growth over the coming years.

Also, initiatives by European governments to make provisions for public charging stations for electric vehicles are likely to support market growth over and are projected to provide a gain of 210 BPS to the European hybrid electric vehicles market over the decade.

The European market for hybrid electric automobiles witnessed growth at 10.6% CAGR during the years 2017-2021. According to Fact.MR analysis, the market is projected to register 14.2% CAGR over the assessment years 2022-2032. 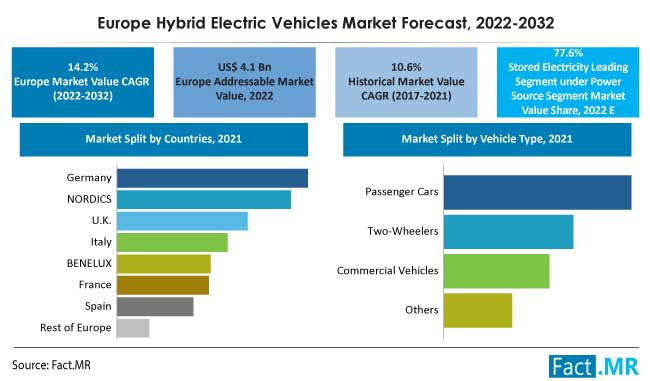 Market share analysis of vehicle type and countries is provided in the image in a nutshell. Under vehicle type, passenger cars dominated the market with 37.8% share in 2021.

Why are Hybrid Electric Vehicle Sales Expected to Surge across Europe?

Governments across Europe are offering subsidies such as incentives and tax rebates for consumers to go for hybrid electric vehicles. These, along with new investments, are likely to boost the European hybrid electric vehicles market in the long run. Surging demand for low or zero-emission vehicles along with stringent emission regulation standards will also drive the market going forward.

Governments in Europe are focusing on lowering emissions to limit greenhouse gas effects and improve the fuel economy of vehicles.

Thus, government regulations and policies to encourage the consumption of hybrid electric vehicles will provide an optimistic environment for market players to grow over the forecast years, including those producing hydrogen vehicles.

Prominent market players are focusing on an innovative broad line of lubricants and fluids in terms of hybrid-electric and electric cars. Players in the market are launching a range of fluids that are designed especially for hybrid and electric vehicles and can meet the cooling and lubrication needs of modern and differently-abled engines.

This ensures that peak conditions are maintained throughout the engine’s lifecycle and this can fulfill applications such as compatibility with new electric components, boost in dielectric properties of engines, temperature constraint solutions, lubrication for transmission, etc.

Furthermore, companies are looking to develop low-carbon solutions for offshore facilities and Liquefied Natural Gas (LNG), thereby accelerating energy transitions. All these factors are likely to propel demand growth of the hybrid electric vehicles market in Europe during the assessment period.

Why is the Europe Hybrid Electric Vehicles Market Led by Germany & NORDICS?

This high growth is attributed to the factors such as escalating demand for fuel-efficient automobiles and rising environmental consciousness among consumers in these regions. Also, high emphasis on the development of innovative designs and advanced technologies to produce low or zero-emission vehicles with high-performance engines and soundless operations is boosting market growth.

For example, they aid in reducing fuel costs through better fuel economy. Onboard electric generator hybrid electric vehicles hold 22.4% of the market share and are projected to register 14.1% CAGR over the forecast period.

The Europe market for hybrid electric vehicles, under vehicle type, is segmented into passenger cars, commercial vehicles, two-wheelers, and others.

Amongst them, passenger cars hold 38.2% market share and therefore lead the market. The segment is projected to rise at 14.8% CAGR over the decade owing to factors such as rising interest in electric vehicles by the population across Europe. Key players in the market are also launching electric vehicles in new use case areas such as taxis, etc., which is promoting segmental growth.

The hybrid electric vehicles market in Europe is likely to surge from a nascent stage on the back of healthy investments by private players in the market and supporting regulatory policies and regulations by governments.

In addition, the rising interest of consumers in electric vehicles on the back of controlling emissions will pave the way for new opportunities in the market. Investments and research & developmental activities undertaken by market players to innovate their product offerings will also aid market growth and development.

*98 figures and 99 tables includes by FactMR