The global fresh meat packaging market is expanding steadily, creating lucrative growth scope for key industry players. With rise in consumption of beef, pork, and other type of meat and seafood across regions, manufacturers and suppliers are expected to come across new opportunities over the coming years.

A recent report on ‘fresh meat packaging’ by Fact.MR offers thorough analysis of the global industry, growth & restraining factors, and demand supply trajectories for the forecast period of 2021 to 2031. According to the report, rising preferences for polyethylene (PE) and polypropylene (PP) materials will aid industry growth, while leading regions such as North America, Europe, and Asia Pacific will further spearhead demand growth.

Over the years, suppliers of fresh meat packaging have experienced growth in sales owing to increase in the production of beef, pork, seafood, and poultry products. Adoption of new advanced technologies by leading meat packaging manufacturers and suppliers, coupled with rise in inclination towards sustainable packaging solutions, have further catalyzed market growth during the last 5 years from 2016 to 2020.

How is Rise in Meat Production Bolstering Demand for Fresh Meat Packaging Solutions?

As production of various meat, poultry, and seafood is increasing substantially, suppliers of fresh meat packaging are witnessing rise in demand around the globe. According to a report titled “Meat Production Statistics Explained”, published by the European Union (EU), the United Kingdom produces 27% of the global meat, while Spain, Romania, and France account for 18%, 11%, and 8% of global production, respectively.

As stated by SelectUSA, the meat and agribusiness industry contributed close to US$ 160 billion in export sales to the U.S. economy in 2018, which is forecast to grow further. This, in turn, is creating new avenues for manufacturers of fresh meat packaging.

What are the Key Challenges Faced by Fresh Meat Packaging Suppliers?

Despite experiencing high demand, there are a few disadvantages of fresh meat packaging, such as- 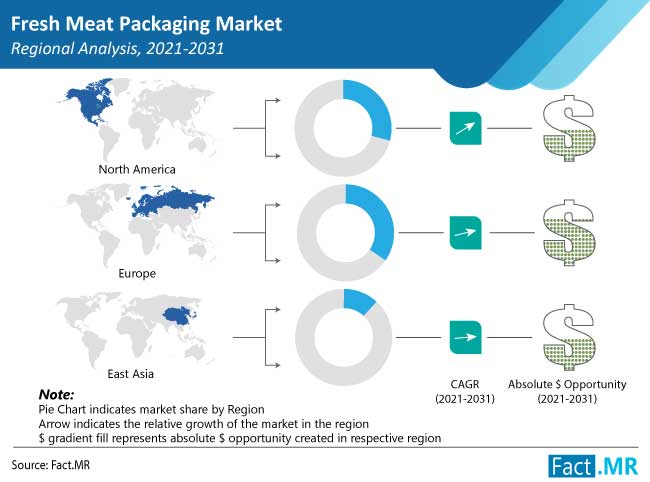 The United States has been leading in the North American market for fresh meat packaging, and is expected to exhibit hegemony over the coming years. Growing production of meat and other meat products is bolstering demand growth in the United States.

Germany is the dominant industry in Europe for fresh meat packaging, and is expected to lead over the forecast period. Adoption of modern technologies by manufactures and rise in consumption of meat are spurring market expansion in the country.

As stated in a report titled “Agricultural Output- Meat Consumption”, published by OECD, in Germany, meat consumption is close to 38 kilograms per capita per year. As stated in the report, per capita consumption of meat, pork, and poultry grew to nearly 60, 35, and 14 kg per capita, respectively, in 2019. No doubt that suppliers are eyeing Germany in order to increase their sales footprint.

Will China Fresh Meat Packaging Industry Remain in the Limelight?

China has been at the forefront of fresh meat packaging in Asia Pacific since the past decade, and predicted to sustain its leading position through 2031. Advanced manufacturing hubs and expanding meat and poultry firms are augmenting demand growth in China.

According to a report titled “Livestock and Poultry: World Markets and Trade”, published by the United States Department of Agriculture (USDA), beef and veal production in China grew to 6,685 in 1000 metric tons in 2020 from 6,346 in 1000 metric tons in 2017, and is forecast to increase further in the foreseeable future. This gives an estimation of how lucrative China is for fresh meat packaging manufacturers.

How Big the Opportunity is in India Fresh Meat Packaging Industry?

India is driven by exponentially growing demand from diverse meat production sectors such as beef, pork, and others. According to a report published by the Ministry of Food Processing Industry, India produces around 5.3 million metric tonnes of meat and 75 billion eggs annually. As stated in the report, India is the largest producer of buffalo meat and second-largest producer of goat meat, while current processing levels in poultry are 6% and for meat it’s 21%. No doubt that key players are attracted to India in order to raise their profit margins.

Which Packaging Type is Most Sought-after in the Fresh Meat Packaging Industry?

Presently, modified atmosphere packaging is leading in terms of packaging type, and is likely to remain dominant throughout the forecast period, owing to its various advantages such as-

Other key segments in terms of packaging type, which are fueling sales, are vacuum skin packaging stand up pouches, vacuum thermoformed packaging, and others.

With the competition getting stricter, players in the global fresh meat packaging industry are launching a diverse range of quality products.

The United States, Germany, China, Japan, Canada, France, South Korea, the United Kingdom, and a few others are lucrative markets for fresh meat packaging, and are expected to dominate throughout the forecast period.

Presently, polyethylene (PE) is the most lucrative in terms of material, and is expected to remain dominant over the forecast period of 2021 to 2031.

Presently, the beef and pork segments have high demand in the fresh meat packaging space, and are predicted to sustain their leading position throughout the forecast period.

*51 figures and 36 tables includes by FactMR