Fact.MR, a market research and competitive intelligence provider, reveals that frozen meat products hold 32.5% share in the global frozen food market, and are expected to witness a prominent CAGR of 6.5% to reach a valuation of US$ 61.5 Bn by 2031.

Consumers are turning towards ready-to-cook meals to fill the gap between hectic work schedules and nutritional intake of protein, iron, and other nutrients in their day-to-day diets, creating opportunities for frozen meat products used in semi-cooked food products, such as frozen beef, frozen chicken, frozen pork, and so on.

To fulfil this rising demand, growing number of frozen meat product manufacturers are joining the market, with newcomers spreading to new markets. As a result, most countries' food trading in the frozen meat industry is becoming increasingly international. Due to this, supply chains are becoming larger and more complicated, leading to a rise in the need for meat to stay fresh for extended periods, thereby driving frozen meat sales.

Food retailers and supermarkets want products to maintain the desired visual appearance, scent, and other quality features of processed meat products for longer periods of time while on supermarket shelves to keep up sales, which is pushing up frozen meat demand globally.

Frozen food has gained popularity in developing and developed nations as a result of strategic and technological advancements. For example, free frozen freezing technology has a number of advantages that allow manufacturers to recoup the cost of the freezing equipment in less time, as such, promoting the production of frozen meat products.

Most meat processing enterprises are now using this technology as a standard, such as the EU Poultry Group, allowing them to enhance production levels and grow geographically by shipping products to different areas and nations. 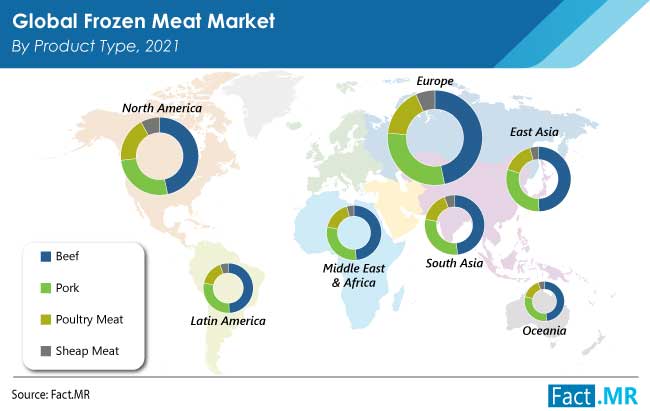 According to Fact.MR, the frozen meat industry in China is expected to expand at a CAGR of 4.2% through 2031. One of the major factors positively influencing frozen meat sales in China is rising demand for convenience foods along with excellent development of the retail sector - rising number of large retail chains, including hypermarkets and supermarkets, which is promoting demand for frozen meat in the country.

The frozen meat industry in India is surging due to significant coverage of distribution channels in the country. The evolution of modern retail outlets such as D-Mart, Food Bazaar, Spencers, and online grocery stores such as Big Basket and Groffer’s in the frozen meat industry in India led to positive growth of 6.9% at present (2021), and is expected to increase the market value to US$ 5.5 Bn by 2031.

How is High Demand for Shelf-Stable Meat in Germany Affecting Frozen Meat Sales?

The frozen meat sector in Germany is experiencing a rise at a CAGR of 3.8%. This is attributed to the augmented need for longer frozen meat shelf life by both, manufacturers and retailers. It will give more time to transport and sell meat products and also lead to inventory shrinkage due to reduced spoilage, thereby driving frozen meat consumption in the country.

According to The Organic Trade Association, sales of organic food items in the United States hit US$ 50.1 Bn in 2019, up 4.6% from the previous year. Organic meat has been more popular in recent years, and rising demand for organic foods is expected to fuel demand for frozen organic meat products over the projection period.

The frozen beef market is expected to rise at a CAGR of 6% due to increased quantities of slaughter-ready cattle and rising carcass weights due to high incidence of male slaughter, according to the US Department of Agriculture.

Meanwhile, increased cow supply and improved slaughterhouse margins are likely to boost beef production in Brazil (USDA). Carabeef production in India will resume its recovery in 2021, following a steep reduction in output in 2020 due to severe supply chain interruptions.

Similarly, recent developments related to companies supplying frozen meat have been tracked by the team at Fact.MR, which are available in the full report.

How much is the current worth of the global frozen meat industry?

Currently, the global frozen meat market is worth around US$ 32.8 Bn.

At what CAGR is frozen meat sales expected to grow?

Over the last five years, at what rate did frozen meant sales increase?

What is the demand outlook for frozen meat over the decade?

Who are the top 5 frozen meat suppliers operating in the market?

Which are the major countries driving demand for frozen meat?

The U.S., Australia, India, and China, are majorly driving demand for frozen meat.

What outlook does the market in Europe provide?

At what rate is the U.S. market for frozen meat expected to progress?

The U.S. market is projected to surge at a CAGR of around 5.5% over the next ten years.

Pea Hull Fiber Market to expand at a healthy CAGR by 2029. Rising consumer inclination towards the F...

CBD Beverages Market is set to witness steady growth by 2028. The rising awareness of the health ben...

Therapeutic applications of lime oil are expected to garner revenues worth US$ 75 Mn with lime oil m...