Changing lifestyles (lesser cooking time, expanding snack consumption, etc.) and rising health have resulted in a surge in demand for frozen fish and seafood, such as frozen prawns, squid, and fillets. Frozen shrimp, in particular, is gaining popularity as a result of rapid expansion of shrimp aquaculture, increasing initiatives taken by shrimp manufacturers, and heightened frozen shrimp online presence, besides other factors.

Consumers are shifting towards pre-cooked frozen foods to balance busy working schedules and health requirements, leading to augmented adoption of cooked frozen shrimp due to its easy consumption and nutritious properties, including iodine, protein, vitamin B12, calcium, etc., as such, leading to rising demand for frozen shrimp fish food globally.

As per Fact.MR, a market research and competitive intelligence provider, over the past half-decade, global market value for frozen shrimp was boosted owing to increased application of the product in various areas such as food, cosmetics, pharmaceuticals, etc.

Export of frozen shrimp is also experiencing a rise to meet with high demand. Types of shrimp that are increasingly being exported and their frozen shrimp HS code include:

According to Fact.MR, the frozen shrimp industry in China reached a volume of 499,381 MT in 2021. Because shrimp is a mainstay in Chinese cuisine, the country has long practised aquaculture and today produces a substantial amount of frozen shrimp fish food, helping the market grow in the country.

Shrimp's strong nutritional profile and accompanying health advantages are a major driving force for its consumption in China. It is high in antioxidants and astaxanthin, which helps the nervous and musculoskeletal systems perform better.

Furthermore, as a result of strong economic growth and increased affluence, Chinese consumers are undergoing a "nutrition transition," and are moving away from a carbohydrate-based diet toward foods with higher protein content, thereby promoting the sales of frozen shrimp.

Previously, seafood was mostly consumed in India's coastal regions. However, it is currently gaining popularity across all regions, including the interiors. The frozen fish market in India is slated to expand at a CAGR of 6.2% through 2031.

Will High Demand for Fast Food Propel the U.S. Market for Frozen Shrimp?

The market in the U.S. is set to rise at a CAGR of 9.8% and close in on a value of US$ 9.6 Bn by 2031. Increased demand for fast foods such as ready-to-eat (RTE) and ready-to-cook (RTC) foods, as well as rising consumer awareness about health, are driving the U.S. frozen shrimp industry.

In February 2021, the US Food and Drug Administration (FDA) began the second phase of its Artificial Intelligence (AI) Imported Seafood Pilot programme. The goal of the pilot is to improve the agency's ability to promptly and accurately detect imported seafood products that could be harmful to people's health. As a result, customer confidence in shrimp products is growing, benefiting the U.S. market for frozen shrimp.

Ecuador appears to have been able to pivot, diversify, and strengthen its shrimp export sector, according to Ecuador's National Chamber of Aquaculture (CNA). The market is expected to hold a share of 38.4% to reach a value of US$ 1.25 Bn by 2031.

Simultaneously, the Sustainable Shrimp Partnership (SSP), which was founded in 2018 by leading Ecuadorian shrimp companies such as Grupo Almar, Songa, Omarsa, Grupo Lanec, Naturisa, and Promarisco-Grupo Nueva Pescanova, has built a powerful marketing and promotion board touting Ecuador's shrimp as safe and sustainable, therefore, heightening frozen shrimp demand in the country.

Farmed whiteleg frozen shrimp is anticipated to witness a high CAGR of 9.8% over the forecast period. There was increase in demand for farmed whiteleg shrimp during COVID-19, owing to the fact that it promotes immunity.

Selenium, an antioxidant found in farmed whiteleg shrimp, aids in the maintenance of a healthy immune system. As a result, there has been a rise in intake as it can be a good aid to fight against COVID-19. 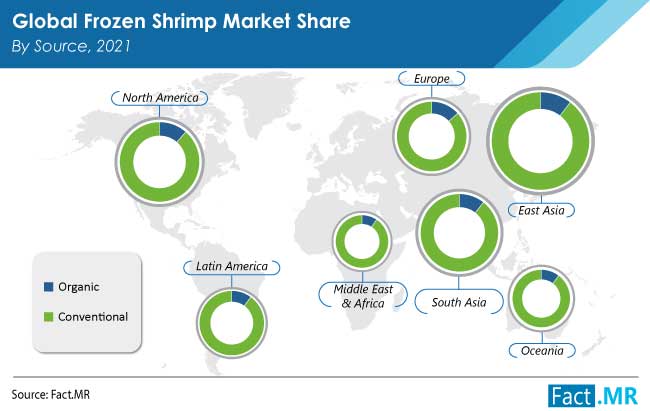 The organic frozen shrimp market is expected to surge at a high CAGR of 10.1% over the forecast period, even though conventional frozen shrimp is presently holding a higher value of US$ 19.3 Bn.

Consumers are becoming more aware of the methods used in aquaculture and the negative consequences it can have on both, humans and the environment when used inappropriately, which has resulted in increased predisposition towards responsible aquaculture practices. In recent years, this shift towards better farming has had a favourable impact on global demand for organic frozen shrimp.

Manufacturers are entering into strategic partnerships with regional distributors and end users to catch up with the growing needs of a huge client base.

How much is the current worth of the global market for frozen shrimp?

Currently, the global frozen shrimp market is worth more than US$ 21.7 Bn.

At what CAGR is sales of frozen shrimp expected to grow over the decade?

Frozen shrimp consumption is expected to increase at a CAGR of around 8.4% over the period of 2021-2031.

How did frozen shrimp consumption pan out in the last five years?

What is the demand outlook for frozen shrimp over the decade?

Global frozen shrimp sales are forecasted to surpass US$ 48.8 Bn by the end of 2031.

Who are the top 5 producers of frozen shrimp?

How are key players reacting to the new developments in the market?

Which are the major countries driving demand for frozen shrimp?

China, the U.S., Thailand, and India are the main countries driving demand for frozen shrimp.

What outlook does the European market for frozen shrimp provide?

Europe holds around 15% of the global frozen shrimp revenue share.

At what rate is the the U.S. frozen shrimp industry slated to grow?

The U.S. market for frozen shrimp is projected to expand at a CAGR of around 9.8% over the next ten years.

Frozen Egg Market is expected to reach a valuation of US$ 6 Billion by 2031. Frozen whole eggs segme...

Frozen Smoked Salmon Market to grow at a positive CAGR during the forecast period, 2021-2031. Manufa...