The global heat staking machine market has reached a size of US$ 382 million and is forecasted to surge ahead at 9.7% CAGR to reach a market valuation of US$ 968.3 million by the end of 2032.

Bench-top heat staking machine sales are expected to rise even faster at a CAGR of 10.1% over the next ten years.

Businesses that are creating tech equipment or plastic products that require several alterations often choose a heat staking machine. It is a contemporary option that is less expensive and more effective than earlier choices.

Heat dissipation was a major drawback of using additional hardware as electronic components generate heat once powered. Moreover, the hardware used to modify plastic components caused an increase in cost as well as unnecessary weight to the component.

Heat staking machines produce hardware-free bindings that are less likely to break, deteriorate, or cause concerns with quality control. By adopting the most up-to-date techniques, manufacturers will not only develop items that are of the highest quality, but also use less hardware overall, cut costs, and shorten the production process.

Demand growth for heat staking machines across end-use industries, including automotive, electronics & electrical, packaging, and consumer products, has given these businesses a crucial competitive edge to adopt the advanced technology.

From 2017 to 2021, worldwide demand for heat staking machines increased at a CAGR of 4.3%. The market is projected to exhibit high growth at 9.7% CAGR through 2032, according to Fact.MR, a market research and competitive intelligence provider. 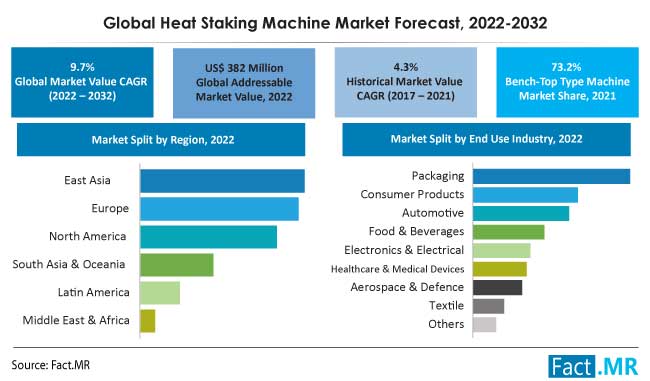 Why is Usage of Heat Staking Machines Rapidly Increasing?

The heat staking procedure is widely employed in a variety of products. Common applications include attaching busbars, insulators, joining printed circuit boards permanently, and many more. In the automobile sector, heat staking is frequently employed in the manufacturing of electric motors for the front and rear lights, locking systems, control units of sensors for driver assistance systems, and interior trim for vehicles.

As EV infrastructure continues to grow rapidly, there is ample opportunity for the market for heat staking machines to expand along with the automotive component manufacturing industry.

The automotive end-use industry is expected to expand at 8.3% CAGR during the forecasted period.

Rise in the process of heat staking across various end-use industries such as automotive, medical devices, and electrical & electronics has provided a vital competitive advantage for the companies to leverage the growth of the market.

Heat staking machines are mostly used in healthcare devices; they are used in the making of the assemblies of medical beds, dentist machinery, and others.

The heat staking process is also used to join PCBs in the housing sector. Manufacturers are adopting new techniques and researchers are developing sophisticated compounds.

Demand has paced up for heat staking machines as users are adopting the technology with open hands due to their advanced technology, rising availability, and collective offerings.

“Increase in R&D in Electrical & Electronics Industry to Push Sales”

In the electrical sector, heat staking is most typically used to combine plastic and metal materials. This procedure is useful for connecting numerous applications, including those for cameras, telephones and accessories, medical equipment, and many more. The market has grown as a result of the expansion of technology and service providers.

What is the Market Scenario in U.S. for Heat Staking Machine Market?

The United States heat staking machine market is currently estimated at US$ 73.8 million and is expected to reach US$ 170.7 million by 2032.

The United States dominates the heat staking machine market as enjoys huge investments in the automotive and electronics sectors. Growing adoption of industrial automation is enhancing efficiency in the manufacturing and processing sectors.

Along with significant growth of the automotive, electronics, and other end-use industries, the heat staking process is also supported by the growth of these markets. Manufacturers are trying to provide advanced technological machines and services to end users, which will drive market expansion in the U.S. over the coming years.

Because of its strong economic growth and a significant number of market players operating in the country, the United States will account for 81.7% of the North American market share for heat staking machines by 2032-end.

Why is the China Heat Staking Machine Market Expected to Be Highly Lucrative?

The China heat staking machine market is expected to reach a valuation of US$ 215.2 million by 2032.

By the end of 2032, the market in China is expected to expand at a CAGR of 11.4% during the forecasted period. It is attributable to the country's stable leadership and its unwavering commitment to incorporate digital technologies in factories, thereby driving significant sales of heat staking machines.

Which Technology is Highly Preferred in Heat Staking Systems?

Global manufacturers of heat staking machines are always trying to adopt newer technologies to stay at the top of the competition. Key manufacturers are focusing on launching new solutions for the heating and joining of materials, enhancement of safety & comfort, creativity and productivity of products, and much more.

Marketing strategies such as strategic alliances, product launches, acquisitions, partnerships, capacity expansion, and more are being widely adopted in this landscape.

What is the global heat staking machine market value?

The global heat staking machine market is valued at US$ 382 million in 2022.

How is the market for heat staking machines expected to fare?

Worldwide demand for heat staking machines is anticipated to reach US$ 968.3 million by 2032-end.

How did the market perform over the past few years?

Which region leads the global market for heat staking systems?

East Asia leads the global heat staking machine market and is set to account for 30.9% market share by the end of 2032.

Which type of heat staking machines are most widely employed?

Innovation has entered the sphere of archery with smart archery equipment being introduced by manufa...