According to Fact.MR, the oncology segment is anticipated to accrue highly lucrative gains to the human umbilical vein endothelial cells (HUVEC) market, attributed to their purported effectiveness in targeting malignant growth. Simultaneously, uptake across tissue culture is also likely to widen in the future.

The U.S. and Indian markets are expected to provide immense growth opportunities for HUVEC, as both countries are making significant strides in furthering good quality healthcare across key domains as CVD and cancer treatment.

From 2016 to 2020, demand for human umbilical vein endothelial cell-based treatment has been gradually gaining momentum, as advancements in genetic engineering and biotechnology become increasingly overt. Extensive applications are being witnessed in the oncology domain, followed by tissue culture and angiogenesis.

Growth of the market remained consistent across the COVID-19 pandemic, although initial shocks were experienced in the first half of 2020, attributed to reduced hospital visits amid fears of contracting the novel coronavirus infection. Future prospects are extremely lucrative, especially across emerging economies across Asia as spending on healthcare infrastructure augments.

Over the years, tissue engineering has acquired immense popularity, being deployed across a broad spectrum of treatment domains. Tissue engineering provides alternatives to surgical reconstruction, transplants, and other mechanical devices that are used to repair damaged tissues.

The market for tissue engineering is also driven by a continuous increase in the need for effective regenerative treatments owing to a rise in the prevalence of diabetes, obesity, and other disorders due to lifestyle changes, aging population, and growing trauma cases. Hence, demand for human umbilical vein endothelial cells based treatment is garnering significant momentum.

What is the Scope of HUVEC in Angiogenesis?

Hence, prominent healthcare providers are leveraging advanced treatment and diagnosis approaches to address this condition. Hepatocellular carcinoma is an aggressive malignancy, resulting as the third cause of death by cancer each year. The management of patients with HCC is complex, as both the tumour stage and any underlying liver disease must be considered conjointly. 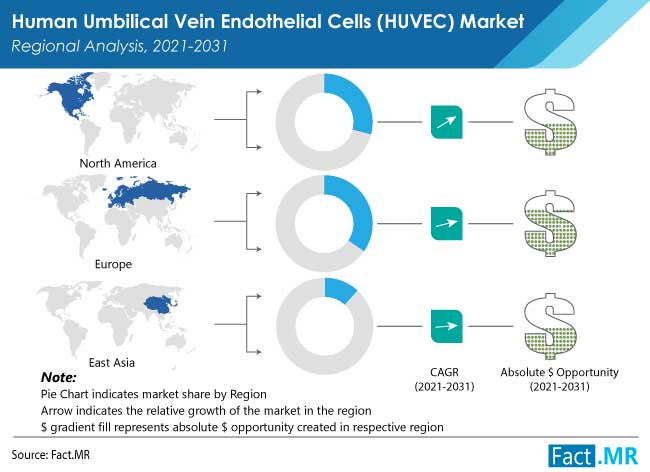 How Bright are HUVEC Growth Prospects across the U.S.?

HUVEC-based treatment adoption rate in the U.S. is expanding rapidly to treat cardiovascular diseases. Several studies have established that HUVECs are a highly useful model for research on human endothelium, and is effective in examining the pathophysiological mechanisms involved in the onset of CVDs.

Additionally, this approach is being increasingly incorporated in the diagnosis and treatment of various forms of cancers. Furthermore, these cells are also being incorporated in angiogenesis to study ovulation, inflammation and tumour growth patterns.

Why is India Considered a Lucrative Market for HUVEC Players?

In recent years, India has generated a fertile space for cell culture- and tissue culture-based treatment. As biotechnology acquires rapid pace in the country, numerous initiatives are being undertaken to further its applications across the broad spectrum of treatment areas.

As per data published by India Against Cancer, around 2.25 million people are afflicted with the disease, with new patients amounting to over a million every year. Hence, major companies are accelerating efforts to discover potent treatments, elevating prospects for HUVEC based treatment.

By type, pooled donor HUVECs are acquiring significant popularity, and the segment is projected to expand at more than 10% CAGR through 2031, attributed to their ability to reduce donor variability so as to provide a uniform and consistent application standard to key genetic research platforms.

Players such as Lonza offer a series of cryopreserved HUVECs, shipped as frozen primaries, which are pooled donor and single donor based. Their XL size consists of 10 million cells/ampoule which are achieved by pooling donors.

Which is the Primary Application Area of HUVECs?

HUVECs for oncology and cancer treatment are expected to find immense applications over the decade, with the segment expected to surge ahead at 12%-15% CAGR, as prominent healthcare settings leverage the latest cell technology to eradicate the disease.

The HUVEC landscape appears highly consolidated, marked by the presence of a handful of service providers across prominent geographies. These players primarily concentrate on offering high-grade product offerings as their primary expansion strategy.

How fast is the human umbilical vein endothelial cells (HUVEC) market projected to expand from 2021 to 2031?

According to Fact.MR, the human umbilical vein endothelial cells market is projected to surge ahead at approx. 10% CAGR through 2031, with the growth rate even higher in Western countries as compared to other parts of the world.

Which is the most promising application area for human umbilical vein endothelial cells (HUVEC)?

The oncology segment is anticipated to accrue highly lucrative gains to the human umbilical vein endothelial cells (HUVEC) market, expanding at close to 15% CAGR over the next ten years, attributed to their purported effectiveness in targeting malignant g

Which countries are likely to offering promising expansion prospects for HUVEC through 2031?

North America, especially the U.S., and Europe, are expected to account for more than 40% market share, and are expected to provide immense growth opportunities for HUVEC, as both regions are making significant strides in furthering good quality healthcar

Which prominent players are operating within the global HUVEC landscape?

Oncology Molecular Diagnostics Market was valued at US$ 1.7 Billion in 2020 and is anticipated to re...

Sterile Compounding Pharmacies Market is expected to reach a valuation of US$ 8.9 Billion by 2031. I...