The global intraocular lens market is expected to increase from a valuation of US$ 4.1 billion in 2022 to US$ 6.7 billion by the end of 2032 and expanding at a CAGR of 5% over the next five years,

The world has witnessed a prominent increase in the incidence of cataracts and this has led to an increased number of cataract surgeries being performed across the world. This is expected to primarily drive the intraocular lenses market potential across the forecast period.

Increasing prevalence of diabetes in the general population is one of the major factors that is causing cataract problems and is expected to positively impact sales of intraocular lenses over the years to come. The growing geriatric population is also one of the more important prospects that favor intraocular lenses market growth since aging people are more prone to vision impairment and cataracts.

However, the lack of favorable reimbursement for postoperative issues and the use of premium intraocular lenses are expected to have a hindering effect on the overall market potential through 2032. 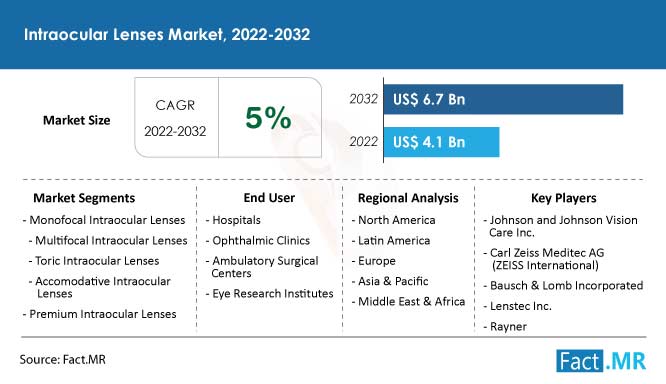 “Rising Prevalence of Diabetes Increases the Risk of Vision Impairment”

Diabetes and vision impairment are directly related as an increase in blood sugar levels leads to structural changes in the lens of the eyes. Hence, diabetic people are more prone to cataracts and other vision impairment issues, which is expected to favor sales of intraocular lenses through 2032.

Moreover, the rising senescent population across the world is also expected to drive market growth across the forecast period as these aging people are more prone to diabetes and ophthalmic conditions.

What Opportunities in the Intraocular Lens Market Could New Entrants Cash In On?

Upcoming intraocular lens market players should focus on the rising demand for new and technologically advanced intraocular lenses to establish themselves in the global marketplace.

How Will The Market Evolve in the Asia Pacific Region?

The intraocular lenses market in the Asia Pacific region is anticipated to be driven on the back of growing aging population and rising incidence of diabetes. Supportive government initiatives to increase awareness of ophthalmic conditions and the rising number of cataract removal surgeries being performed in the region are also anticipated to favor the overall intraocular lenses market growth going forward.

The adoption of advanced ophthalmic procedures and products is also expected to be a crucial trend that could shape the overall intraocular lenses market potential in this region.

What Makes the United States an Appealing Market for Suppliers of Intraocular Lenses?

Increasing investments in research and development of novel products and supportive government policies are other factors that are expected to positively influence demand for intraocular lenses in the United States going forward.

Why are Monofocal Intraocular Lenses the Popular Choice among Users?

Meanwhile, demand for premium intraocular lenses is predicted to rise at a faster CAGR than monofocal lenses owing to their rising use in the treatment of intricate retinal conditions.

Which End User Will Spearhead Intraocular Lens Demand and Sales?

Hospitals are projected to lead the global demand for intraocular lenses owing to a high number of eye surgeries being performed in these establishments. The rising availability of novel eye treatments in hospitals and growing investments in healthcare infrastructure development are expected to bolster intraocular lens sales in hospitals through 2032. The growing availability of free-of-cost eye surgeries in government hospitals is also a major factor expected to boost the growth in the hospitals segment throughout the forecast period.

Companies in the intraocular lens market are expected to focus on acquisitions, mergers, collaborations, and partnerships that help them strengthen their global market presence.

Key manufacturers of intraocular lenses are also focusing on getting approval for their new products from regulatory authorities to commercialize them and propel sales potential.

Sales of intraocular lens are slated to reach US$ 6.7 billion by 2032.

Demand for intraocular lens is predicted to steadily rise at 5% CAGR through 2032.

Monofocal intraocular lens accounted for over 50% of the global market share in 2021.