The sale of syringes is directly reliant on a number of liquid biopsy performed in which North America is the favorable market for target product in 2022.

Due to the global rise in invasive medical procedures and the presence of numerous chronic diseases, syringes have taken up a significant amount of space in laboratories, hospitals, and research facilities. Additionally, the target product market has grown throughout the course of history due to the target product's relative quick action time compared to other oral medications in terms of drug administration. Hence, the aforementioned factors witnessed the growth of syringes market with a compound annual growth rate of 4% from 2017 to 2021.

Usage of syringes are 1.5X higher than any other commonly used medical supplies. These are used by healthcare practitioners to administer liquids, diluted substances and drugs in humans as well as vets and pets. In addition, syringes also find its application in fluid removal from body cavities or to clean wounds. Despite the fact that syringes have been used for a long time, there has been a sharp increase in demand for syringes over the past few years due to the expanding use of disposable syringes, the expansion of mass vaccination programs, and the rising tendency of self-administration of injections.

Over the 2017-2021 historical period, the global syringes market registered a CAGR of 4%, and according to the Fact.MR, a market research and competitive intelligence provider, the market is projected to exhibit growth at 4.2% CAGR between 2022 and 2032. 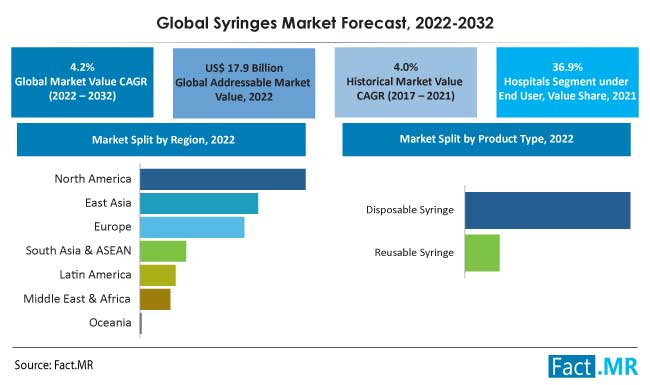 Market share analysis of syringes based on syringe type is provided in a nutshell in the above image. Under the syringe type segment, disposable syringes segment dominates with 82.9% market share in 2022.

“Immunization Campaigns by Government Bodies to Boost Sales of Syringes”

Mass immunization is significantly on the rise with growing awareness of the proven effectiveness, sustainability of vaccines among the population for controlling various infectious diseases like hepatitis, tetanus etc. The use of auto-disable syringes improved vaccination coverage rates thereby improving injection safety. Sale of syringes is therefore expected to increase during the predicted period due to the increased frequency of vaccination and immunization programs initiated by the government. For instance, UNICEF organizes various vaccination programs for the community to confer long term protection of human body from serious liver infection.

In addition, availability of different syringes in varied sized to suit different doses and comfort levels is positively impacting the growth of syringes market. The aforementioned reasons are expected to uplift the market for syringes across the globe.

“Growing Diabetic Patient Population to Uplift the Market for Syringes”

Factors namely ageing, urbanization, changing lifestyles are contributing to the increase in long term trends observed in diabetic patients. Individuals suffering from diabetes use insulin syringes in order to administer the appropriate insulin dose prescribed by healthcare professionals. Such multiple use of syringes to administer different doses per day is spurring demand for syringes. It is observed that the total number of patients requiring insulin is expected to be approximately around 150 – 200 million individuals on a global level. Therefore, the use of insulin treatment to regulate blood sugar levels among the population is expected to stimulate the market expansion on syringes across the world.

What Do Syringes Producers Need to Watch Out for?

Reusing of syringes for multiple purposes causes inadvertent contamination and transmits injection site infections to the patients. Diseases like HIV and hepatitis spread through such unsafe use of syringes. Nearly 12 % HIV injections are caused by unsafe use of syringes in India. Blood residues on the used needle and syringes often spread diseases to other individuals who come in contact with the used syringes. In addition, COVID-19 pandemic also brought caused shortage in syringes due to rising emergency in delivering vaccine shots in developed and developing nations with the presence of limited manufacturing players in the market. Such use of syringes for multiple purpose acts as a restraining factor for the global syringes market.

Why U.S. is a Major Market for Syringes?

The United States syringes market is currently estimated at US$ 5,629.5 Million.

Having one of the most developed healthcare infrastructures, presence of established global players and investments in the research and development sector has made U.S. as one of the opportunistic market for syringes. In addition, escalating use of self-administrative due to surge in chronic diseases have helped to maintain the growth trajectory of syringes sales.

Government support in the form of finances to the market players in their production units will open a handful of opportunities for the syringes market expansion.

Why is India Expected to be Highly Lucrative for Syringes Market?

Growing consumers’ shift towards innovative and beneficial products with less associated risks have opened incremental opportunities for developing regions such as India. Having a population of 1.39 Million, India is considered to be one of the rapidly growing economies in the world. With various vaccination drives being initiated by Indian Government to protect the community from ill health, increase in per capita healthcare spending of the population has positively impacted the growth of syringes market in India. The outbreak of the pandemic also proved to be a major factor for the market expansion of syringes in India.

Thus, India will become a profitable market for the target product with such a high number of chronic disease cases, according to Fact.MR.

Why are Disposable Syringes Highly in Demand?

Why are Hospital Considered to be the Hold Concentrated Sale of Syringes?

Market share by hospitals as end users is anticipated to grow at a CAGR of 3.7% over the estimated period. The growing number of hospitals worldwide and presence of highly skilled workforce 24/7 are considered to play a major role in the augmentation of this segment. In addition, use of syringes for performing various hematology tests at hospitals create extensive opportunities for the syringes market.

Manufacturers focuses on market dominance by following various strategies like mergers & acquisitions, partnerships, expansion of distribution channel across the globe etc. With an objective to expand their product portfolio, manufacturers tremendously invest in R&D sector as well as increase their human resources. Following such marketing strategies will enable them to enjoy significant growth opportunities in the coming years.

Fact.MR has provided detailed information about the price points of key manufacturers of syringes positioned across regions, sales growth, production capacity, and speculative technological expansion, in the recently published report.

*85 figures and 48 tables includes by FactMR