As per detailed analysis by Fact.MR, pipe handling system sales accounted for 8%-10% of the global material handling market value in 2021, with this share expected to increase to 12%-15% by 2032. This is mainly due to rising adoption of automation technologies in the oil & gas industry.

As per latest market analysis by Fact.MR, a market research and competitive intelligence provider, consumption of pipe handling systems over the past half-decade increased at a sluggish CAGR of around 0.2%. In offshore environments, utilization of pipe handing systems stood at 143 units in 2021. In addition, due to the presence of extensive displacement activities, drilling rigs generated demand worth US$ 17.25 Mn in the same year.

Escalating demand for high-performance pipe handlers in oil & gas fields is projected to provide a thrust to market development for oil & gas pipe handing equipment over the decade, especially in North America and the Middle East & Africa. Surging utilization of pipe hoisting equipment in drilling activities in these regions is projected to create ample opportunities for pipe handling system manufacturers over the coming years.

Furthermore, surging application of pipe handling systems for drilling and workover applications is likely to supplement growth of the market over the period of 2022-2032, which is anticipated to expand at a CAGR of 4.5% through 2032. Increased spending on the exploration of unconventional reservoirs will push demand for pipe handling systems, especially in Indo-China, Russia, and the United States. 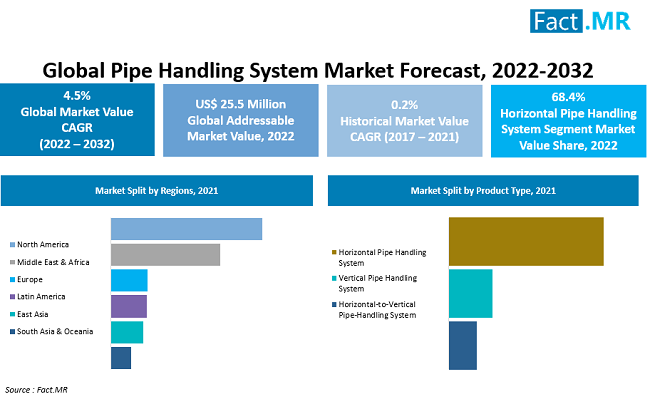 What are the Key Influencing Factors Driving Demand for Pipe Handling Systems?

The oil & gas industry is associated with various hazards such as blowouts, unwanted kicks, and other challenges associated with pipe handling operations and rigs. Due to this, there is constant demand for advanced pipe handling equipment that improves the safety of drilling personnel. Due to the development of automatic products, safety standards in drilling operations have improved over the past few years, thereby driving demand for automated drilling systems, including automated pipe handling systems.

Additionally, governments across the world are looking to increase their oil and gas export volumes over the coming years. Growing demand for oil & gas has surged activities associated with oil & gas exploration, drilling, and production. Governments are spending huge amounts on the development of new wells in oil & gas fields.

This trend can also be observed in other countries such as China, the U.S., Russia, Iran, Iraq, and Saudi Arabia. This is expected to create abundant opportunities for market players over the coming years, especially for those manufacturing hoisting systems such as automated pipe handing systems.

Emergence of automation in drilling and well completion activities is expected to drive product penetration, since it reduces the human efforts necessary for pipe lifting and installation. In oil well drilling operations, a variety of pipe handlers and casing elevators are been utilized for pipe handling operations. It requires multiple tools in rig floors and reduces space availability for pipe spinners and rig floor equipment such as slips, power tongs, and other tools.

What Restraining Market Development to Some Extent?

Moreover, the rise of e-vehicles is expected to reduce dependency on oil & gas in the transportation sector, leading to further uncertainty in the oil & gas sector.

Consumption of conventional energy sources such as petrol, diesel, kerosene and coal generates a significant amount of CO2 and other greenhouse gases. Due to this, a shift has been observed from conventional to renewable sources of energy over the past few years. Alternative energy sources such as wind, solar, hydro, geothermal, and other bio-composting methods provide waste management, optimal heating ,and cleaner & greener energy. Due to this, demand for oil & gas and conventional fuel is likely to decline in industrial and residential applications.

Thus, the trend of renewable energy is likely to hamper drilling activities in the oil & gas industry and reduce product penetration of pipe handling equipment in the near future.

What Makes the United States a Growth Driver for Pipe Handling System Consumption?

Expanding drilling & production activities in the U.S. is poised to generate an absolute $ opportunity of US$ 5.31 Mn during the period of forecast. In addition, the U.S. holds 78.9% share in the North America pipe handling system market.

Why are GCC Countries a Lucrative Regional Market for Pipe Handling Device Manufacturers?

GCC countries has been one of the most lucrative markets driving the consumption of pipe handling systems over the past decade. This regional market value currently stands at US$ 4.8 Mn, and likely to expand at a CAGR of around 4.7% over the decade.

Robust growth of the GCC pipe handling system market is projected to come from rising investments in oil & gas exploration and new well development activities. These are anticipated to generate noteworthy demand for pipe handling system suppliers over the coming years.

Which Environment is Projected to Account for Higher Utilization of Pipe Handling Systems?

According to Fact.MR research, offshore environment is likely to contribute approximately 58% of revenue share to the pipe handing system market.

Which Pipe Handling System Type is Mostly Used in the Oil & Gas Sector?

Horizontal pipe handling systems is anticipated to be most lucrative segment during the forecast period. This segment currently accounts for 68.4% of market share, and is estimated to be valued at US$ 17.5 Mn by the end of 2022.

Horizontal pipe handling systems have the capability to handle various ranges of tubular pipes such as casing, drill pipes, tubing, and bottom-hole assemblies, which make them the most attractive from the consumers end.

How much is the current worth of the pipe handling system market?

Currently, the global pipe handling system market is valued at US$ 25.5 Mn.

Pipe handling system sales are expected to increase at a CAGR of around 4.5% during the period of 2022-2032.

How has the pipe handling system market performed over the past half-decade?

In terms of pipe handling system consumption value, the market expanded at a CAGR of around 0.2% during 2017-2021.

How have market players reacted to key developments in this space?

Who are the prominent manufacturers of pipe handling systems?

What share of the market is captured by the Middle East & Africa region?

The Middle East & Africa region held approximately 28% share of the global market in 2021.