Security services accounted for around 3% share of the global administration, facility management, and business support services market in 2021, and are likely to increase this share by 200 BPS over the next ten years.

Urbanization & industrialization are on the rise as more people move to cities. High population density has increased concerns about crime and instability, which, in turn, could lead to increased demand for security services in residential and commercial spaces. The commercial and industrial market is forecast to be the major driver for security service growth in the future.

The global market for security services registered a CAGR of 4.1% from 2017 to 2021, according to Fact.MR, a market research and competitive intelligence provider, and is projected to progress at a 4.3% CAGR between 2022 and 2032. 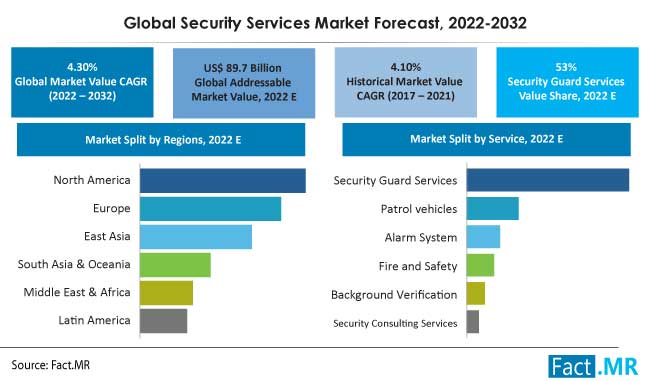 Market share analysis of security services based on service and region. Under the service segment, the security guard services sub-segment accounts for the highest market share of 53%.

Which Factors are Enhancing the Market Share of Security Services?

The return of global businesses to normal operations has led to an increase in revenue available for security services. Business start-ups and construction projects are growing in popularity. As the global economy continues to grow, the need for secure infrastructure is increasing in industrial complexes, offices, IT parks, and other public facilities.

Growing numbers of tier 1 and tier 2 cities have led to rapid growth in the construction of residential structures. The growing urban population will have a positive impact on the demand for security services.

Many people view the world today as a more dangerous place than ever before. This is due to a variety of dangers, including terrorism and computer viruses, as well as fraud and organized crime. Public sector organizations continue to outsource many security services to the private sector in response to budget cuts and changing threats. This is becoming more complex as security challenges become more sophisticated.

The trend of regulating private security providers is continuing, which is helping increase public confidence in these services. Both the general public and clients in the private and public sectors have seen an increase in their use. As security concerns have increased, so too has the demand for security-related products and services.

What Challenges are Faced by Security Service Companies?

Due to the Covid-19 pandemic, there was a shortage of available labor in almost every industry. Many people lost their jobs because of the pandemic and some governments provided them with monetary aid.

Companies are now hiring candidates that they would have previously rejected. Candidates with less experience, fewer skills, past disciplinary problems, and questionable work histories are being hired by companies that would not have considered hiring them in the past.

The cost of wages is the most important factor that determines the price of a labor-based service such as security. In most cases, 60% or more of the total revenue for services goes to workers’ salaries. Just like any other company, security companies need to attract and keep employees at salaries that are competitive in the market.

The COVID-19 pandemic had a significant impact on the labor market around the world. The current worldwide labor shortage has created a shortage of workers in nearly every industry, which has led to staffing shortages and unfilled positions. This has led to wages being inflated as employers compete for a smaller pool of available workers.

Why is the U.S. the Largest Market for Security Services?

The U.S. security industry is growing rapidly and new companies are entering the market all the time. The increase in security threats is likely to be responsible for the recent growth in security services. The world is always changing, and as it does, new security threats (defund police, violent black lives matter movement (BLM) arise that need the attention of professionals.

Recently there has been a change in the perception of the people in how they see the security market or its people.

The changes that educational institutions are making are similar.

The U.S. security service market is currently valued at US$ 22 billion in 2022.

Will India Be a Profitable Market for Security Service Providers?

The security services market is growing globally as people become more security-conscious due to increasing terror threats and the low police-to-citizen ratio. There are many factors such as rapid economic growth, urbanization of large populations, and increased consumer spending power, which will drive the demand for private security services.

Private security services in India are expected to grow faster than in some of the more developed and mature markets. This is likely due to the country's rapid economic development and growth in financial services.

Why is Demand for Security Guard Services the Highest?

Since global economic growth has been good, urbanization has accelerated and new industries and infrastructure have been created in response. There has been an increased need for personal security services. The demand for security guard services is on the rise, not only in booming corporate sectors but also in burgeoning middle classes residing in housing societies and residential apartments.

Security guard services are important for urbanized industrial societies, ensuring the safety and security of individuals and property. This includes protecting intellectual property and sensitive corporate information. In developed societies like the USA, the jobs of private security personnel go beyond manned guarding. Private security personnel are typically engaged in activities such as crime prevention and law enforcement.

How Will Government Institutions Account for Major Revenue Generation for Security Service Organizations?

Government security forces have limited resources and outdated equipment. Around the globe, many government companies and municipalities are now requesting adequate security. The companies and municipalities that need to protect their property, employees, and citizens will turn to the outsourcing market to meet this increased demand for security with a shrinking number of police officers on the street.

These several issues faced by governments across the world will ultimately push the demand for private security services.

Fact.MR has provided detailed information about the providers of security services positioned across regions, revenue growth, and product offering expansion, in the recently published report.

What share does North America hold in the global security services market?

What is the predicted market size for 2032?

Global demand for security services is anticipated to reach US$ 136.6 billion by 2032.

How fast did the security services market expand historically?

Which type of security services accounts for the highest market share?

How much revenue is expected from the security services market in 2022?

The global security services market is estimated at US$ 89.7 billion in 2022.

Wireless Security Systems Market is expected to grow during, 2021-2031. Development of solar-powered...