Owing to the widespread application of carbon dioxide in several end-use industries such as oil & gas, chemicals, food & beverages, etc., carbon dioxide market demand is only set to increase rapidly over the years ahead. Along with this, rising investments being undertaken by prominent carbon dioxide manufacturers will mitigate the demand-supply gap.

Carbon dioxide (CO2) is an odorless and colorless gas that is present naturally in the atmosphere. Carbon dioxide is a greenhouse gas that is vital for the Earth’s ecosystem. It is recovered from flue gases, from limekilns, and as a by-product from the preparation of hydrogen for the synthesis of ammonia.

Carbon dioxide is broadly used in a variety of applications across several industries. Demand for carbon dioxide is primarily dominated by the oil & gas industry for enhanced oil recovery and the food & beverage industry for food processing and carbonated drinks. It’s also used in fire extinguishers and is a constituent of medical gases as it promotes exhalation.

A historic growth rate of 4.7% was witnessed between 2017 and 2032. According to the detailed analysis done by Fact.MR, a market research and competitive intelligence provider, the U.S. carbon dioxide market is projected to expand at 6.7% CAGR during the assessment period (2022-2032). 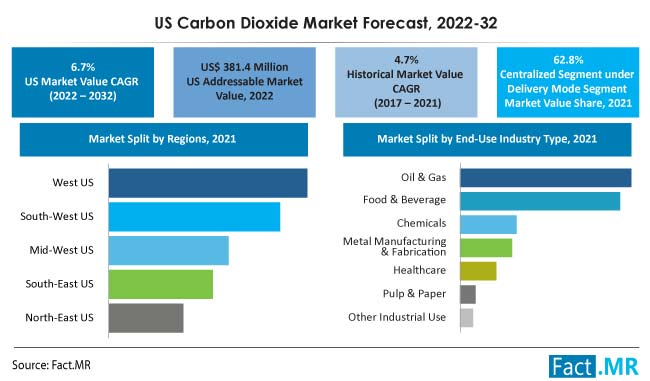 The above image reveals analysis by end-use industry and region in a nutshell. The oil & gas industry, under end use, dominated the market with 33.9% share in 2021.

Why is Carbon Dioxide Usage Increasing across the United States?

Over the last few years, carbon dioxide is being injected into oil reservoirs for the recovery of additional oil.

The market is developing experience in transporting and injecting carbon dioxide for enhanced oil recovery (EOR). Thus, the technology developed for EOR is extensive owing to constantly evolving technology and regulatory requirements.

Use of carbon dioxide in oil recovery is beneficial for the environment. While sustained use of naturally occurring carbon dioxide is critical to current development, since it represents more than 90% of the CO2 that is available, great volumes of commercially available carbon dioxide captured from power plants and industrial sources have the potential to produce billions of additional barrels of trapped oil & gas.

Captured CO2 also has the added environmental benefit of not being released into the atmosphere. After EOR activities are finished, the carbon dioxide that is used in oil recovery is permanently sequestered in old oil formations.

“Burgeoning CO2 Demand to Be Witnessed from Chemical Industry”

Augmented output of the chemical industry is propelling the demand for carbon dioxide in various applications. Carbon dioxide is used in multiple synthesis processes; for instance, in creating a modified atmosphere during the reaction, for the logistics and transportation of chemical and allied products, as a feedstock and for cryogenic applications in the chemical industry, etc.

Market players are investing in the industry due to diverse applications of CO2. For instance, players are netting CO2 from waste sources and power plants using catalysts to make polypropylene carbonate. The plastic can then be used for adhesives, coatings, packaging, and foams, and can replace other plastics that are currently made from oil.

Which Regions of the U.S. Account for Higher Carbon Dioxide Demand?

Growth of the chemical industry is leading to the greater use of carbon dioxide as an inert gas in chemical processes. Rising production and consumption of oil and gas have increased the demand for carbon dioxide as it is injected into oil reservoirs for the recovery of additional oil.

Moreover, the food & beverage sector in these regions is placing augmented demand for carbon dioxide to control atmospheric storage and preserve food & beverages, and also for other food processing applications such as chilling, freezing, etc., which will support the regional market growth of carbon dioxide over the coming years.

Which Delivery Mode of CO2 is Popular across the United States?

However, the onsite segment holds 37.2% market share and is predicted to rise 6% CAGR over the decade.

Which CO2 Application Accounts for Most Revenue of Market Players?

Other noteworthy segments are the food & beverage and chemical sectors, which hold 31.7% and 11.2% share in the overall market, respectively. These segments are predicted to expand at 7.3% and 5.6% CAGRs throughout the studied years.

Besides removing carbon dioxide from the air, manufacturers are using it for their commercial benefits. Carbon dioxide production and transportation are some of the key problems faced by industrialists. The cost of generation and supplying carbon dioxide is also quite high.

Companies in the United States carbon dioxide market are opting for investments in research and development to introduce cost-effective carbon dioxide transportation systems.

Market players are resorting to acquisitions & collaborations and expanding geographically to offer novel products to their consumers.

Fact.MR has provided detailed information about the price points of key manufacturers of carbon dioxide positioned across the U.S., sales growth, production capacity, and speculative technological expansion, in the recently published report.

How is the U.S. carbon dioxide market shaping up?

How did the market perform during the 2017 to 2021 historical period?

Which carbon dioxide suppliers are prominent in the U.S.?

What is the West U.S. carbon dioxide market stance?

Which production method of carbon dioxide is the most popular across the U.S.?

Combustion method of producing carbon dioxide accounts for 61.3% share in the United States.