The rapidly growing rate of the elderly population and technological developments that improved device functioning, such as long-lasting lifetime and better patient adherence to operating, maintaining, and replacing the device, including outpatient spares, are responsible for the growth of in-dwelling voice prosthesis devices. The preference for in-dwelling voice prosthesis devices has grown as a result of their low air resistance and optimum retention in the tracheoesophageal wall, which also contributes to their market dominance.

The most recent projections by the American Cancer Society for laryngeal cancer in the U.S. for 2022 are as follows:

Around 35% of laryngeal malignancies grow in the supraglottic part (above the vocal cords), whereas about 60% begin in the glottis (the region housing the vocal cords). The remaining either forms in the subglottis (behind the vocal cords) or overlap several areas, making it difficult to determine where they originated.

A voice prosthesis device is a medical tool that helps people who have had their larynx removed talk. The larynx may be totally or partially removed during a laryngectomy. It is typically performed in cases of laryngeal cancer when the disease has advanced despite treatment. When performing a laryngectomy or undergoing secondary puncture, voice prosthesis devices—made of medical-grade silicone—are inserted between the oesophagus and windpipe. These are implanted either directly through a tracheostomy or the mouth and throat using a guidewire.

Voice prosthesis devices help larynx cancer patients speak. Voice prosthesis can stay in the tracheoesophageal passage while regular cleaning is being done through the consumables used in the installation and care of the devices, such as the implantation surgical kit, brush, adhesive plates, and flush cleaning equipment.

In tracheoesophageal illness, the oesophagus and trachea are abnormally joined, preventing the production of voice. The tracheoesophageal disease affects newborn babies and is brought on by excessive salivation carried on by cough, vomiting, and other disorders.

What is Generating Potential Opportunities in the Voice Prosthesis Devices Market?

A sore throat and ear pain are symptoms of laryngeal cancer, a condition in which cancer cells develop into tissues in the larynx.

High alcohol intake, weakened immune systems, exposure to pollutants such as asbestos, and poor diet are all linked to laryngeal cancer. People with sedentary lifestyles, such as smoking, drinking, consuming processed foods, and eating an inadequate amount of fruits and vegetables, are at the greatest risk of developing laryngeal cancer.

The percentage of people leading such a lifestyle is rising, which is raising the incidence of larynx cancer and, as a result, the number of people undergoing laryngectomy, which is driving up demand for voice prosthetic devices. Additionally, laryngeal cancer typically develops over years, making it uncommon in younger communities but common in those with ageing populations.

The number of elderly people is increasing, which is resulting in more individuals needing voice prosthetic devices. The voice prosthesis devices market is expanding due to factors including favourable reimbursement policies, increased patient awareness, and rapid demand for technological improvements in the healthcare sector.

Which Factors are Negatively Influencing Sales of Voice Prosthesis Devices?

Various studies are being conducted on the type of material utilised to create voice prosthesis devices and equipment, which demonstrates reduced immunological rejection inside the body of the patient. To demonstrate that the equipment fits comfortably and improves inpatient productivity, the size of the voice prosthesis is being modified.

Thus, the market for voice prosthesis devices can also be hampered due to the lack of consumer acceptability of the product and the high price of voice prosthesis valves, in addition to the high cost of surgeries. 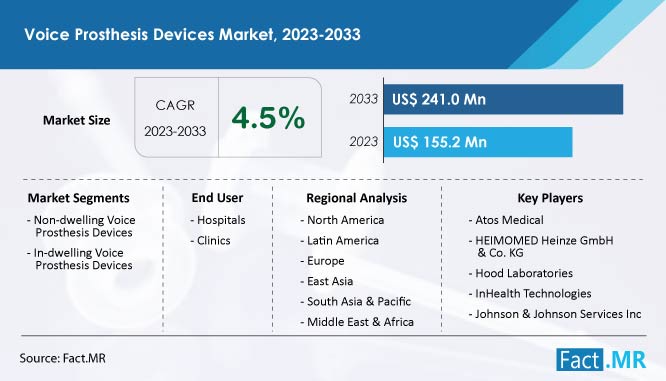 What is Driving the Sales of Voice Prosthesis Devices in the U.S.?

The United States holds a significant position in the North American market. This dominance is primarily attributed to the rising tracheostomy cancer cases, together with rising healthcare costs and the availability of cutting-edge healthcare facilities.

Thus, it is anticipated that the usage of voice prosthesis devices will increase as laryngeal cancer cases in the nation are increasing.

Why are Top Market Players Attracted to Asia Pacific Countries?

The regional market with the quickest growth during the projected period is expected to be Asia Pacific. The demand for ENT surgical devices is increasing due to the region's expanding ageing population and the diseases associated with them.

Leading companies are investing in these emerging nations and creating advanced vocal implants to increase their market share, demonstrating the great demand for vocal prosthetic devices in the region.

Japan, China, India, and South Korea are some of the top markets in the Asia Pacific region. Sales of voice prosthesis devices in China and Japan are predicted to increase at CAGRs of 7% and 3% during the next 10 years.

Thus, the market for voice prosthesis devices in the Asia Pacific is growing as a result of rising cases of throat disorders and the demand for ENT devices.

How is Demand for Voice Prosthesis Devices Evolving in Germany?

Sales of ENT medical devices such as artificial noses, voice prosthetic devices, and hearing implants are increasing in Germany due to the prevalence of ENT-related ailments and the incorporation of cutting-edge technologies in medical instruments & diagnostics.

Demand for voice prosthetic devices is increasing as a result of the presence of important manufacturers and an increase in throat cancer occurrences nationwide.

Why Do Hospitals Account for High Demand for Voice Prosthesis Devices?

Rising cases of throat-related disorders are boosting the demand for voice prosthetic devices from hospitals. With the presence of advanced healthcare infrastructure along with highly qualified medical experts, target patients are choosing hospitals to get effective treatments.

Best surgical experience with cost-effectiveness is increasing the demand for voice prosthetic devices from hospitals, which is further boosting sales growth.

A majority of companies competing in the international market for voice prosthetic devices are involved in mergers and acquisitions. They are improving their market position as a result of these efforts.

While this is happening, several businesses are concentrating on improving their device offerings. They are increasingly spending on R&D initiatives and implementing innovative designs with this goal in mind.

Furthermore, key players in the vocal prosthesis devices market are expanding their regional presence by utilising a variety of tactics, including partnership agreements. All of these developments suggest that the global market for vocal prosthetic devices is expanding healthily.

Global demand for voice prosthetic devices is valued at US$ 155.2 million in 2023.

The global voice prosthetic devices market is expected to reach US$ 241 million by 2033.

The United States, China, Japan, and Germany are dominating the global market.