The global breathalyzer market was valued at around US$ 760 Mn in 2020, which amounts to around 13% share of the overall drug testing market.

Sales of breathalyzers are slated to accelerate at a steady CAGR of 8% to top US$ 1.7 Bn by 2031. Demand for fuel cell technology in breathalyzers is set to increase at a CAGR of 6% across the assessment period of 2021 to 2031.

As per Fact.MR, a market research and competitive intelligence provider, the global market for breathalyzers was valued at US$ 760 Mn in 2020.

Breathalyzers are quick and easy to use and they provide an accurate way of determining blood alcohol concentration (BAC testing). The dynamic factor boosting sales of breathalyzers is considered to be increasing stringent regulations across the world for alcohol breath testing while driving.

Rise in per capita income, rapid urbanization, and increasing adoption of innovative technology for breath testing purposes are fueling the sales of top-selling breathalyzer devices.

Which are the Growth Determinants for the Market of Breathalyzers?

Demand for breathalyzers has been on a perpetual rise on account of increasing instances of alcohol abuse. The government of various countries have regulated stringent laws to prevent the number of road mishaps and ensure the seamlessness of traffic, which is expected to fuel the demand for drug abuse detection breathalyzers, remote breathalyzers, and point-of-care breathalyzers.

In addition to alcohol detection, alcohol breathalyzers are also used in diagnosing asthma, tuberculosis, and pylori infection detection. As a result, breathalyzers are witnessing a proliferated rate of adoption in medical settings and diagnostic centers.

What Barriers are being Faced by Breathalyzer Manufacturers?

Uncertainty over the accuracy of the results displayed by the breathalyzers, on account of their inability to distinguish alcohol from other chemical compounds consisting of a methyl group structure is anticipated to dampen the growth of the point-of-care breathalyzer market.

Alcohol breath testing is frowned upon in the workplace since it is perceived as a violation of privacy. Another stumbling block to the widespread usage of alcohol breathalyzers is the lack of hygienic conditions for their use.

Which is the Most Profitable Regional Market for Breathalyzer Manufacturers?

Furthermore, the presence of key companies with a large market share is another factor fueling the sales of remote breathalyzers and point-of-care breathalyzers in the region. 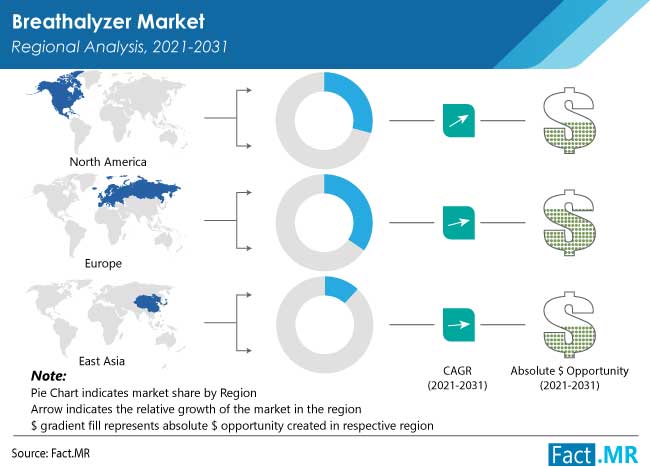 What is the Demand Outlook for Breathalyzers in the U.S.?

The U.S. breathalyzer market is the largest market in North America and is expected to increase 1.8X by 2031.

Strict alcohol testing laws due to high alcohol consumption rate and rising cases of excessive drinking in the country as well as alcohol-related crimes like drug abuse and drunk driving is expected to fuel the sales of cannabis breathalyzers, portable breathalyzers, and pocket breathalyzers and create a favorable environment for the growth of the global breathalyzer market in 2021.

How Lucrative is the Market for Breathalyzer Suppliers in China?

Why is Fuel Cell Technology in Such High Demand for Breathalyzers?

Fuel cell technology is the most widely used technology in alcohol monitoring systems. Fuel cell sensors are designed to detect alcohol specifically and do not require additional sensors.

All these factors are contributing to the growth of the breathalyzer devices market.

Why is Demand for Breathalyzers Highest from Law Enforcement Agencies?

Adoption of breathalyzers in law enforcement is being driven by strict safety laws against DUI and the growing scale of screening and breath testing.

Rising trends of alcohol consumption in parallel to the growing number of cars used as the primary mode of transportation have resulted in a large number of road accidents. As a result, surging demand for blood alcohol testers from the government agencies is projected to positively impact the market growth.

According to U.S. law, individuals with a BrAC level of 0.08% and over are prosecuted. In such cases, breathalyzers are used as crucial evidence for criminal trials. In addition to alcohol, there is a notable increase in the proclivity of individuals for drugs consumption. As a result, manufacturers of drug testing breathalyzers have been endeavoring towards enhancing the functionality of their products to detect cases of drug abuse.

Demand for pocket breathalyzers and personal breathalyzers by the government agencies has risen as law enforcement officers focus on strictly enforcing the "do not mix drink and drive" motto.

During the COVID-19 crisis, the global breathalyzer market size experienced a downturn as most economic activities were halted.

However, as soon as restrictions were reduced, growing use of breathalyzers in the detection of chronic and infectious diseases has fueled demand for technologically advanced breathalyzers all over the world and paved the way for opportunities for leading breathalyzer market players in 2021.

Manufacturers of breathalyzers are concentrating their R&D efforts on new product development to expand their product portfolio in the global electronic breathalyzer market.

Partnerships and collaborations are two of the most common strategies used by industry players to expand their market share.

The global market for breathalyzers is currently worth more than US$ 760 Mn.

Stringent government regulations and increasing use of breathalyzers in detecting various diseases are key trends that are driving sales.

Sales of breathalyzers in Canada are forecasted to reach over US$ 380 Mn by 2031.

With 40% share, North America will largely contribute to the growth of breathalyzer revenue.

Breathalyzer sales in Germany are expected to rise at a CAGR of 4% over the forecast period of 2021 to 2031.

Fuel cell technology accounts for a share of 50% in the market.

The U.S., China, U.K, Germany, and France are expected to drive most of the demand for breathalyzers.

The global market is expected to surge at a CAGR of 8% over the decade.

*93 figures and 297 tables includes by FactMR