The global vestibular testing systems market is currently valued at US$ 114.6 million and is predicted to expand at a CAGR of 5.8% to reach US$ 201.1 million by the end of 2032.

With high numbers of vestibular testing procedures being performed, North America is expected to offer the most opportunities to market players over the assessment period (2022-2032).

Vertigo and balance issues are becoming more common among people all over the world. The demand for vestibular testing devices has been significantly influenced by the rise in the incidence of vestibular diseases among youngsters. Additionally, the market has grown as a result of improvements in health infrastructure in developing nations, government-run awareness campaigns, and desirable reimbursement policies.

The market is anticipated to grow steadily over the forecast period due to the low cost and ease of use of vestibular testing systems. The market is primarily composed of private clinics and hospitals. Due to the expansion of hospital infrastructure, it is anticipated that the hospitals segment would account for a sizable percentage of revenue generation in the market.

Sales of vestibular testing devices are predicted to increase at a CAGR of 5.8% through 2032. 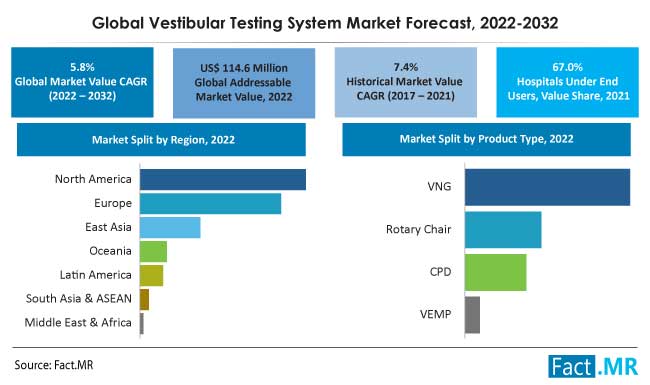 Market share analysis of vestibular testing systems based on end user and region. Under the end-user segment, hospitals led with 67% market share in 2021.

Why is the Need for Vestibular Testing Systems Rising Steadily?

Globally, people are reporting more and more vestibular illnesses such as vertigo and balance problems, and it is predicted that this trend will likely continue over the coming years as well. The same has reportedly been seen across several Western European countries.

In addition to pain and exhaustion, dizziness is the third-most common symptom that practitioners report seeing in patients, according to this Fact.MR analysis. Another factor driving market expansion of vestibular testing devices is the rise in the prevalence of these disorders among youngsters.

Nearly 3.3 million children in the U.S. experience vertigo or balance issues, which translates to more than 1 in 20 children. As such, a rise in the number of vestibular disordered patients across the globe is likely to drive a higher need for vestibular testing systems.

Aging is associated with progressive decline in both, vestibular and human balance systems. Due to better healthcare infrastructure and rising awareness among the population, people across the world are living longer.

For instance, in the U.S. alone, there are more than 40 million adults that are of age 65 and older. Thus, a rise in the geriatric population in both, size and proportion, across the globe will maintain the demand growth trajectory of vestibular testing systems during the forecast period.

Additionally, improving awareness and health concerns and increased risks associated with vestibular disorders such as falls are other factors that are propelling the demand for vestibular testing equipment across regions.

How Can Market Expansion Be Dented to Some Extent?

A majority of people rely on insurance to cover their medical expenses. Compared to other tests, vestibular testing is more expensive. The need for services for vestibular testing for vertigo is growing; however, this is being hampered by the difficult reimbursement scenario.

Compared to alternative therapies, the cost of computerized dynamic post-urography (CDP) and vestibular evoked myogenic potential (VEMP) is 2X higher. Additionally, physical therapy services are less expensive than vestibular testing. Currently, only a few papers support the use of specialized testing for the accurate identification of particular vestibular disorders.

The expansion of the target market may be impacted by all of the aforementioned factors.

The United States market is expected to continue witnessing high growth during the study period, which will allow vestibular testing system providers to keep their hegemonic status in the region of North America, where it held a market share of 38.7% in 2021.

Why is the European Vestibular Testing Systems Market Highly Lucrative?

Europe is the second-largest market for vestibular testing systems owing to a large number of research institutes, government initiatives, and health insurance policies in the region.

Germany is expected to maintain its leading position in the European market for vestibular testing systems during the forecast period, accounting for around 34.3% market share in 2022.

People's willingness and ability to invest in their health and wellness has directly led to a dramatic shift in healthcare spending. Modern techniques are being applied in the German healthcare system's outpatient and inpatient ENT-specific sectors at an increasing rate, which is positively impacting the growth of the target market.

Which Type of Vestibular Testing Systems is Most Widely Used?

It is anticipated that videonystagmography (VNG) systems would experience brisk expansion at a compound annual growth rate of 6.2% through 2032.

There is a reasonable need for VNG devices as a measurement of involuntary eye movement, which may be suggestive of vestibular dysfunction. This has had a substantial impact on the market prospects for vestibular testing systems.

The trend of high demand for vestibular testing systems is related to the presence of medical professionals who have acquired sufficient training to make accurate diagnoses, as well as the high availability of equipment for the diagnosis of vestibular illnesses in hospitals.

Primary growth tactics being pursued by industry players include research and development initiatives, partnerships, and new product developments. Key stakeholders are concentrating on these methods to broaden their geographic reach and improve their current product offerings.

The global vestibular testing systems market is currently valued at US$ 114.6 million.

Global demand for vestibular testing systems is anticipated to reach US$ 201.1 million by the end of 2032.

*85 figures and 48 tables includes by FactMR