Organic feed market to record an impressive growth at 7.1% value CAGR between the period of forecast, 2018 and 2028. Constant pressure from resource constraints on the fragile demand-supply equilibrium in feed, and emergence of new technologies, have led consumers to take proper decisions, and focus toward nutrition-rich organic feed.

Emerging markets are primary growth determinants for the organic feed market, as demand for meat and dairy products has witnessed a significant surge over the past few years.

Demand for greater quantity and variety of organic feed in the meat and dairy industry is imminent, with the growth in affluent population worldwide.

Key players in the organic feed market are focusing on increasing the production capacity, while challenging the already strained natural resource base.

Major increases are being made in the investment related to organic feed, with developing countries witnessing a rise in investment of 50%.

Utilization of productivity enhancing products, such as crop growth regulators, is gaining emphasis to address the aforementioned challenges effectively. 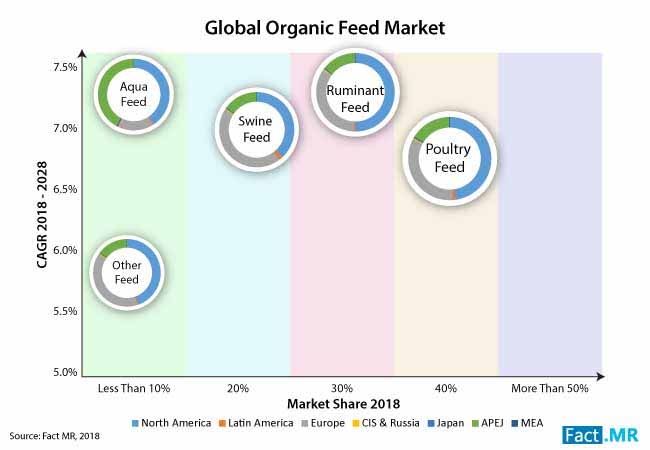 The report opines that the organic feed market will significantly benefit from growing rate of organic meat consumption, which can be attributed to constantly changing lifestyles, and cultural trends perceived in youth population.

Organic feed producers are therefore focusing on the expansion of the production capacities, in a bid to cater increasing demand.

Aiding the production of high-quality meat, enabling weight gain in animals while improving the performance of their digestive system, are key attributes of organic feed that have spurred their demand in the animal feedstock industry.

A large number of programs and initiatives concerning animal welfare and pet health have enlightened consumers in making a cautious choice while purchasing animal feed or pet food.

Most consumers are now preferring healthy and organic animal feed over their chemical ingredients-based counterparts.

Animals fed with organic feed have been discerned to show enhanced immune reactivity, and relatively stronger growth, which in turn has increased consumer attention toward organic feed.

The organic feed market continues to witness a major demand-supply gap, with one of the major impediments being absence of certified organic feed.

Organic feed producers are continuing to innovate and invest at the mill level, meanwhile partnering with relevant industries for addressing the rising requirement.

Progress at the feed supply and mill level is likely to become the game changer for the organic poultry and meat production, which in turn is poised to positively impact growth of the organic feed market.

Irrespective of the nature of the end market, non-organic (conventional) or organic, key players in the organic feed market are constantly focusing on the provision of a complete range of options to their customers, for meeting both niche and mainstream markets.

This will further offset the aspect of supply being an impediment to growth of the organic feed market.

Key market players are focusing on the leveraging the latest technology and science, employing proper certification programs, and advancing their infrastructure, processes, and relationships for meeting their customer requirements.

Novel approaches are being adhered by organic producers, for being early adopters, and gain leading position in the market.

These producers are focusing on enabling their customers with access to greatest range of options for tapping into the market opportunities.

Organic feed producing mills are working closely with relevant growers for ensuring adequate supply of feed ingredients that are certified as organic.

According to the Organic Arable report of the Soil Association, countries such as the U.K. lacks in the number of organic arable farmers, for building resilience, and meeting the rising demand for domestically-grown feed crops.

Promising future prospects have been contemplated for farmers converting from conventional to organic, with governments guaranteeing support to organic farms.

Lower input cost of fertilizers & pesticides required for organic feed production, along with rising emphasis on the mixed and rotation enterprises, are likely to bode well for growth of the organic feed market in the near future.

Overall, future growth prospects for organic feed market will remain bullish, with the study estimating revenues from worldwide organic feed sales to close in on nearly US$ 36,000 Mn by 2028-end.

For the estimation of revenue, regional average prices were obtained through quotes from numerous organic feed manufacturers, exporters, and distributors. Every key end use segment has been considered, while potential applications have been elucidated in terms of secondary sources as well as feedback from primary respondents.

Company-level market share is derived based on usage of organic feed in respective end-use applications. The market projections are propounded on the basis of constant currency rates.

The report imparts a detailed competitive analysis, and profiles of key participants underpinning growth of the organic feed market.

Organic Feed Market is Expected to Grow at 7.1% CAGR

*242 figures and 60 tables includes by FactMR