Organic milk  market sales will continue to increase through 2021 and beyond. According to the study, the market is anticipated to reach US$ 150 Mn by 2021. In the long haul, prospects appear further optimistic, with the industry expected to reach US$ 281.8 Mn by the end of the assessment period 2021-2031. Projected compounded annual growth rate for the aforementioned period is around 6.5%.

According to Fact.MR, market research and competitive intelligence provider, from 2016 to 2020, the global market for organic milk has grown at a CAGR of almost 5%. With consumers increasingly seeking excellence in sensory experiences, they are experimenting with multiple flavors, which has, in turn, sparked demand for flavored organic milk in the past few years.

Since the outbreak of COVID-19, demand for milk consumption raised in the market. In the first quarter of 2020, as infection cases increased, consumers began seeking out healthy, nutritious food products, which resulted in a substantial increase in the market for natural and organic milk in the market. In addition, certain studies reported that organic milk sales increased steadily from both the retail and wholesale sectors during the pandemic period.

Despite the changing market trends, the global market for flavored organic milk is expected to grow in the near future with increasing popularity for different flavors in the market. The growing trend towards organic farming is bound to have a significant impact on the market demand for organic milk. Hence the market is likely to surge at a CAGR of 6.5% from 2021-2031.

Regular consumption of omega 3 fatty acids protects a wide range of diseases and may help reduce the occurrence of heart disease, tissue inflammation, cancer, and arthritis. Thus, demand for organic milk is growing in the market. Concerns over climate change and CO2 emissions from the industry have led to a greater demand for recyclable products in the market. The increased demand for organic milk has been driven mainly by the consumption of green products.

Organic milk manufacturers and ventures are increasingly investing their resources into research and development, aiming to improve and develop healthier milk products, which is considered to be one of the significant factors behind the growth of the global market for organic milk. The Codex Commission under the World Health Organization (WHO) is setting different levels for the restriction of antibiotics and aflatoxin in traditional milk to promote a long-term healthy life. With strict government regulation and FDA-approved food products, various firms have the added benefit of investing in R&D and the dairy industries which contributes to the growth of the organic milk market.

Does Rising Health Consciousness Drive Demand for R&D in this Market?

Even though ultra-high-temperature processing of some foods may dilute their nutritional value, studies have found that organic milk contains a significant level of omega-3 fatty acids. Scientists focused on experiments involving various types of organic milk in the market. The researchers investigated the health benefits of using organic milk in the food industry as a whole.

The health effects of milk's fat have long been a subject of debate among experts. Past studies have shown that foods with high-fat content are unhealthy for humans. Studies have also shown that higher fat consumption from dairy and other sources reduces the likelihood of stroke, death from any cause, and death due to cardiovascular disease.

Recent research from Emory University scientists in collaboration with The Organic Center suggests that organic milk is the healthiest option for families. In a study conducted by researchers, samples of milk obtained from grocery stores were tested to check differences in the levels of growth hormones, antibiotics, and pesticides in conventional and organic milk. As a result of this study, it was found that milk samples derived from conventional cows tested positive for antibiotic residues - two of which are banned by the U.S. dairy industry.

Additionally, a study was conducted that dissected the effectiveness of different packaging methods and the shelf life of these milk in the store. In addition, several studies have also been conducted on milk containers that are available for purchase in the market. Researchers made an effort to acquire a zero residue milk collection process.

Why does the U.S. Dominate the Global Market for Organic Milk?

The growing demand for organic food on the market has led to a significant increase in the demand for organic milk among consumers. According to the Agricultural Marketing Service (AMS), organic milk sales in the United States for September 2021 were 227 million pounds. The region is likely to surge at a CAGR of 7% from 2021 to 2031.

As people have become more aware of the health benefits of organic milk in recent years, there has been an increased demand among consumers for organic milk, which is beneficial because it is rich in good fats that can improve wellbeing. This is one of the primary factors contributing to the growth of organic milk in the U.S. market.

How is the U.K Emerging as an Attractive Investment Destination for Organic Milk Manufacturers?

As organic milk becomes more readily available through online platforms, consumers are more likely to switch from traditional milk to organic milk. The growing demand for locally produced foods and drinks is also raising the demand for organic milk in the households of the UK. As a result of government initiatives promoting a healthy lifestyle, consumers are choosing local farm products over branded and traditional milk. The growing export facilities of organic milk are also regarded as one of the primary reasons for the growth of the U.K market.

For instance, Omsco has more than 250 farmers across the UK, producing more than 250 million liters of organic milk each year. It manages over 65% of the country's organic milk supply and is the only dairy cooperative in the UK owned and run by farmers. As a result, it is the world's second-largest private organic milk pool. In addition, it is the largest provider of organic dairy processing needs, as well as the largest exporter of organic cheese, raw milk, butter, bulk ingredients, whey, and specialist ingredients.

How is the Market for Organic Milk Growing in China?

Several companies, such as Shengmu, are also taking an interest in the Chinese organic milk market since it also meets EU organic standards, which also attracts a lot of attention. The Chinese infant organic milk powder market is also becoming increasingly popular and as a result, companies like Junlebao are investing heavily in its production. Organic milk powder is not only beneficial to health but also easy to find, therefore, sales are increasing steadily in China.

What is the Driving Force behind the Growth of Organic Milk in India?

The Indian Government’s National Action Plan concerning productivity and dairy development has contributed to the growth of organic milk in the market. Growing consumer demand and the availability of organic milk have caused the market to see an increase in sales. The country is expected to register a CAGR worth 6% from 2021-2031. 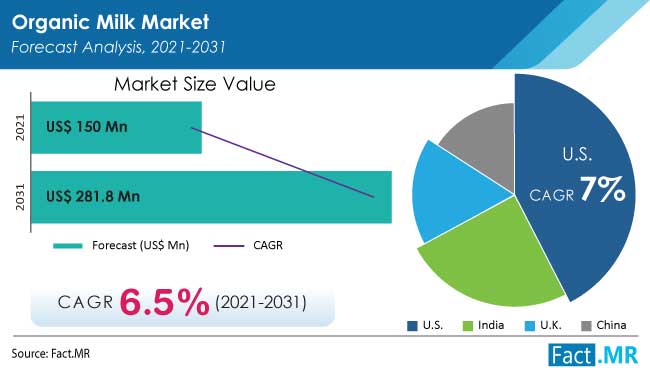 What are the Prospects for Skimmed Organic Milk?

The consumption of fat has become more of a concern for consumers over recent years. Therefore, demand is gaining massive support among consumers. Organic skimmed milk is low in fat and high in protein, vitamin A and vitamin D, and most importantly, it contains a high concentration of low-density lipoprotein, which is good for the heart.

Why is Organic Cow Milk Preferred over Other Sources?

Recent studies have shown that many schools are also promoting organic cow milk for children in many forms, such as tea, coffee, cheese, and chocolate, which have also proven to be of major nutritional value. A CAGR worth 5% is projected for the organic cow milk segment from 2021 to 2031.

Why are Tetra Packs the Most Preferred Packaging Format for Organic Milk?

With the increasing amount of health benefits that milk has to offer, the market has seen a growth in the demand for tetra packs. Growing awareness about the sterilization of milk packets among consumers has raised the need to sterilize milk using Ultra Heat Treatment (UHT) methods in the market. This ensures that the milk is free of microorganisms. A market share worth 35% is projected for this segment.

Tetra pack cartons are expected to witness high adoption rate due to its ability to enhance shelf life of the products under difficult environmental conditions. Additionally, its aseptic technologies ensure that food remains fresh and wholesome for a period of up to six months without the need for refrigeration or any other additives. This helps ensure that food retains its color, texture, flavor, and nutrients.

The global organic milk market size is worth US$ 150 Mn at present.

Increasing demand for preservative-free and plant-based organic milk are the key trends in the global market.

The U.S., UK, China, India, and Germany are the top 5 countries driving demand for organic milk in the market.

*109 figures and 67 tables includes by FactMR