Worldwide camel milk product sales are currently valued at US$ 1.34 billion and are anticipated to increase at a CAGR of 4.1% through 2032. As a result, the global camel milk market is expected to reach a market valuation of US$ 2.02 billion by the end of 2032

The market is anticipated to benefit from camel milk's rising popularity among lactose-intolerant consumers due to its simple digestion process. Additionally, because the milk has higher concentrations of copper, magnesium, manganese, iron, sodium, potassium, and vitamins A & C than cow milk, it is said to be more nutritional.

Medical studies have also indicated that children with autism may live healthier lives by consuming camel milk. Additionally, it was discovered that people who are lactose intolerant tolerate camel milk far better than cow milk.

Camel dairy products have been steadily gaining popularity across the world owing to these nutrient-rich qualities. The variety and flavour of food products that can be manufactured from camel milk are also being increased by manufacturers of camel milk food products. 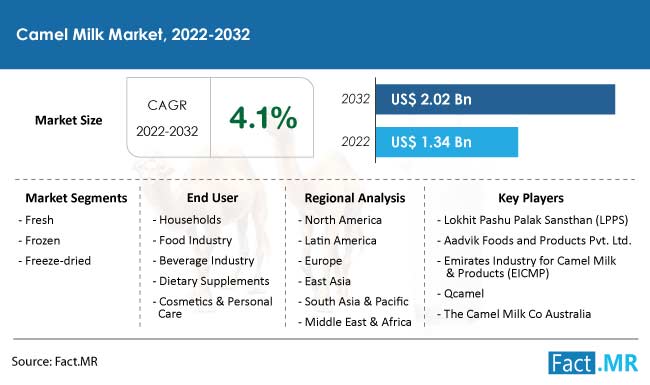 Which are the Market Opportunities & Challenges for Camel Milk Product Producers?

Gastrointestinal health and systemic immunity are both enhanced by camel milk. Compared to cow dairy, this milk has a low-fat level of around 2 to 3 per cent, which is likely to draw more health-conscious consumers who are watching their calorie consumption.

It also benefits young children and newborns because it is the closest substitute for breastfeeding. It is used to provide undernourished children with food in several Middle Eastern and African countries.

Traditionally, camel milk has been either raw or fermented. However, to appeal to more consumers, manufacturers are expanding their product lines in response to the growing number of urban consumers.

The market's vast possibility for product innovation and rising demand in underserved and growing markets will boost camel milk sales over the coming years.

Due to its profile comprising rich essential nutrients and health-improving compounds, camel milk is widely used in food supplements. Camel milk is a natural probiotic that significantly improves digestive health, which is encouraging its use in pharmaceuticals.

Due to the growing demand for food items with functional ingredients and positive health effects, camel milk is also becoming more widely accepted as an ingredient in the food and beverage industry.

Camel milk is becoming increasingly popular as a source of calcium and vitamin B1 due to the rising demand for supplements high in these nutrients. The nutritional and medicinal qualities of camel milk have sparked its growth as a superfood, with a wide range of uses.

Due to high manufacturing costs, camel milk products are more expensive than standard dairy products made from cow milk.

480 grams of camel milk powder is available from Camelicious for US$ 95.95, compared to around US$ 4 per litre for cow milk. Over the coming years, market growth is anticipated to be hampered by the high cost of camel milk products relative to its counterpart.

Which Strategies Should Market Newcomers Focus On?

The first stage is to inform and increase awareness among the affluent consumer base that camel milk is roughly 7-8X more expensive than cow milk.

The popularity of camel milk products among consumers who place a high value on beauty has contributed to the spread of a positive image of camel milk in the market.

Body lotions, shampoos, soap bars, and other personal care products made from camel milk have all seen brisk sales, especially in the U.S. and Europe.

Such high-end goods are heavily marketed and promoted by several beauty publications and salons. The market for camel milk will increase even more as a result of this strategy.

Which Region is The Largest Trader of Camel Milk?

Over the projected period, the North America camel milk market is anticipated to expand at a steady rate. At present, North America accounts for 15.3% of the global market share.

Due to its low sugar level, camel milk has become more popular among Americans and Canadians suffering from diabetes. Because of this, businesses in the sector are expanding their supply in these countries through both, traditional and online outlets. Most shops sell frozen drinks instead of fresh ones.

Africa and the Middle East provide a majority of camel milk to the world. The biggest producers of camel milk in the world are Somalia, Ethiopia, Kenya, Mali, Saudi Arabia, and Niger, with Somalia and Kenya accounting for more than 60% of production.

To fulfil the escalating demand for camel milk, producers are expanding their production capacity by increasing their camel herds.

Additionally, emerging markets such as the U.S., China, India, and Russia are anticipated to increase the market opportunities for camel milk manufacturers over the coming years.

Businesses have also been diversifying their offerings to attract more customers.

Which key camel milk market players are profiled in this report?

What is the camel milk market value predicted to be by 2032?

Which regions are prominent producers of camel milk?

Africa and the Middle East are the top producers of camel milk in the world.

The non-fat milk market is set to witness steady growth during 2021-2031. Increasing awareness about...