Newly published Fact.MR data on the pea milk industry forecasts the market to each US$ 138 Mn by 2031. The growing popularity of vegan products has shifted consumer attention toward plant-based milk. According to the report, the market is expected to reach US$ 40 Mn by 2021-end. The product's creamy texture and higher nutritional content than other plant-based milk are the key reasons for consumer choice, which bodes well for the pea milk market's growth in the coming years. 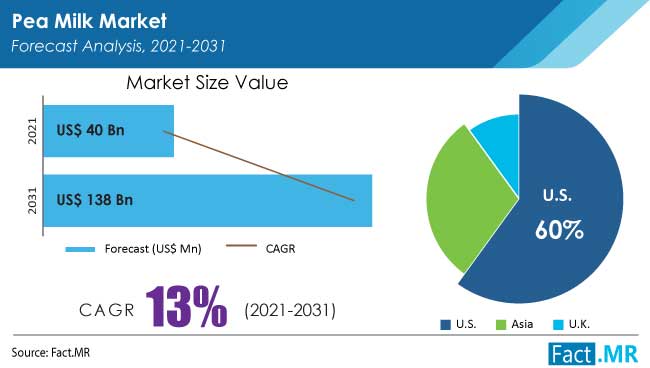 During the 2016-2020 historical period, pea milk sales surged impressively, expanding at a CAGR of 9% to be valued at US$ 35 Mn. As people become increasingly conscious about animal welfare, consumption of plant-based diets is surging, thus widening expansion prospects.

During the COVID-19 pandemic, consumption accelerated, especially unsweetened pea milk. According to W.H.O, ideally less than 5% of total energy intake should come from free sugars. This is mostly because studies demonstrate that high sugar intake may aggravate chronic inflammatory states in infected patients.

Furthermore, growing lactose intolerance prevalence is prompting consumers to opt for plant-based milk and milk products. Manufacturers are experimenting with various plant-based flavors. Hence, Fact.MR- a market research and competitive intelligence provider forecasts that demand for pea milk is likely to accelerate at a whopping 13% CAGR until 2031.

Growing animal welfare concerns globally are prompting meat eaters and animal products consumers to opt for plant-based and other naturally sourced product lines, which includes consumption of plant based milk.

According to the Vegan Society, just 4% of global domesticated animals live freely, while 96% of them survive under dismal conditions in captivity. Realizing this, consumers are refraining from consuming animal based products, impelling prospects for pea milk.

Furthermore, the society advocates that if the world went completely vegan, it could conserve 8 million human lives by 2050, reduce greenhouse gas emissions from agriculture by 2/3rd and save up to US$ 1.5 trillion in climate change damages.

Over the years, the incidence of lactose intolerance has surged, especially across Europe, North America and Asia. Approximately 65% of the human population has a reduced ability to digest lactose post-infancy. However, the incidence varies across different regions.

For instance, prevalence rate is as high as 70-100% among people of East Asian descent, and as low as 5% amongst people of Northern European descent. Going by these trends, people are substituting dairy products consumption with plant-based products.

Amongst all dairy alternatives, pea milk is acquiring major traction. Pea milk is also a good alternative to consumers who may be averse to other plant-based products such as soy, whey, almond or nuts.

What are the prospects for Pea Milk in the U.S?

According to Fact.MR, the market for pea milk in the U.S is anticipated to register high growth, expanding at a CAGR of almost 9% across the 2021-2031 assessment period. A market share of 60% is expected for the U.S market.

A recent study estimates that the number of Americans adhering to plant-based diets increased nearly 9.6 million over the last 15 years. This represents a 300% increase and accounts for nearly 3% of the U.S population. Hence, pea milk is quickly flying off retail shelves across the country.

With a market share of almost 25%, Asia is the fastest-growing region in the global pea milk industry. Low-cost needs for pea production, resulting in increased profitability and productivity of the milk production system, are factors contributing to market expansion in the region.

Furthermore, the rising number of health enthusiasts in the region, as well as the region's high nutritional need due to the population of expanding economies such as India, China, the ASEAN regions, and others, are projected to drive pea milk market expansion in the future.

How is the U.K Generating Growth Opportunities for Pea Milk Producers?

The U.K is one of the most opportunistic markets for pea milk across Europe. According to Finder, an increasing number of the British population altered their diet in 2020- either going vegan, veggie or pescatarian.

According to the study, approximately 1.1 million people followed a plant-based diet at the beginning of 2020. One year later, this figure has surged close to 1.5 million people. This represents a 40% increase in the vegan population. Also, the Vegan Society noted a fourfold increase in the number of vegans.

Based on these aforementioned trends, Fact.MR expects the pea milk market in the U.K to capture a market share of nearly 60% across the 2021-2031 forecast period.

PET bottles, which are primarily used in the packaging of drinking water and beverages, are also gaining popularity in the pea milk industry. Fact.MR expects the segment to surge at a CAGR of 10% until 2031.

PET bottles are more durable, clearer, lighter, non-reactive, cost-effective, and thermally stable than glass bottles. Moreover, PET bottles are in high demand in the pea milk industry because they are environmentally benign and can be recycled multiple times, lowering the cost of production.

According to Fact.MR, pea milk in tetra packs are anticipated to account for 45% of the global market demand across the forthcoming decade. High convenience attributed to its light weight and durability is spurring sales.

Key manufacturers of pea milk are emphasizing on penetrating mainstream retail markets, introducing a wide range of product offerings. Additionally, they are also focusing on forging alliances with leading players along with acquisitions

How much is the market for pea milk worth?

What was the last 5 years market CAGR for pea milk?

What is the expected valuation for the pea milk industry in 2021?

By 2021-end, pea milk sales are expected to reach US$ 40 Mn according to Fact.MR

At what rate is the market likely to expand in the forthcoming decade?

What is currently driving market growth for pea milk?

What is the demand outlook for the market in the U.S?

A CAGR of 9% is projected for pea milk sales in the U.S across the forecast period

How opportunistic are prospects across the U.K?

The U.K is slated to account for 60% of global pea milk revenue until 2031

What are the growth prospects for Asia?

Which packaging type is expected to be most lucrative?

Vitamins and Derivatives Market is expected to grow at a CAGR of 5.7% during the forecast period, 20...