The market is predicted to generate US$ 388.8 million in terms of absolute dollar opportunity during the forecast years (2022-2032).

High use of carbon dioxide for applications in end-use industries for performing therapies, surgeries, freezing, fire extinguishers, etc., is propelling market growth. Along with this, the development of novel technologies by manufacturers to capture carbon dioxide will also propel carbon dioxide market growth over the coming years.

Carbon dioxide is a widely used gas across industries. It is majorly produced through air distillation and absorption through a chemical reaction. It is an inflammable gas, and hence, widely used in fire extinguishers. Carbon dioxide is also used as a cryogenic fluid and dry ice for low-temperature applications.

Carbon dioxide is mainly used in two forms - gas and liquid. It is used in different end-use industries such as oil & gas, food & beverages, paper & pulp, healthcare, chemicals, and others, and is transported by trucks, pipelines, cylinders, and also through onside modes.

The European carbon dioxide market registered a historic growth rate of 5.1% between 2017 and 2021. According to detailed analysis by Fact.MR, a market research and competitive intelligence provider, the market is predicted to register 7.2% CAGR during the assessment period (2022-2032). 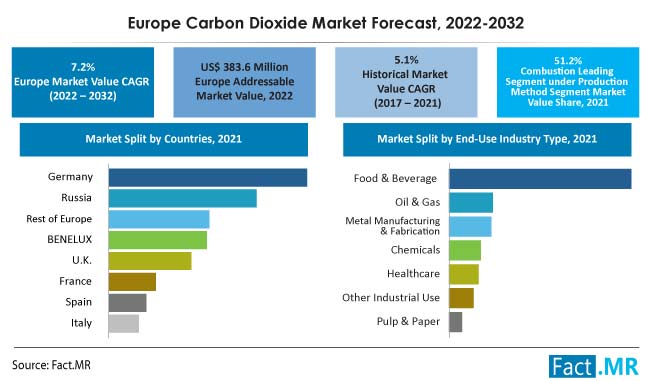 The above picture represents market share analysis by end-use industry and country. The food & beverages industry accounted for 49.5% market share in 2021.

How is the European Market for Carbon Dioxide Being Driven?

The European market is witnessing rising demand for carbon dioxide for use in several applications in the healthcare and medical sector. Governments are taking measures to reduce the operating costs of medical treatment. As a result, the healthcare industry is undergoing vast infrastructural changes.

Carbon dioxide is also used for applications in respiratory, cryogenic, and technical applications in the healthcare industry, which is likely to support market expansion in Europe.

Carbon dioxide is used in medical gas mixtures as a carbogen to be a permanent gas supplied in cylinders filled with high pressure. It is a medical gas mixture of 5% medical CO2 in medical oxygen. It is also used in cryogenic therapy to perform endoscopic and gynecologic examinations, surgeries, etc. requiring high-purity argon.

Market growth in Europe is likely to accelerate owing to the wide application area of carbon dioxide in the healthcare industry.

Changing food habits and rising number of fast-food chains are expected to create high demand for carbon dioxide gas to be used in the food industry.

Demand for food & beverages is anticipated to register attractive growth, driving the need for food to be packaged and transported in modified atmospheres and sourced from distant locations.

Industrial gases find significant use for application in the food & beverage industry that is highly driven by growing carbonated drink demand in the market.

Transporting CO2 across long distances is not a viable option. The cost of transporting carbon dioxide mainly depends on gas pipelines, which distribute large volumes of carbon dioxide to consumers, with the distribution costs of cylinder gases being much higher.

Both liquid tans and high-pressure cylinders require skilled manpower owing to safety issues. As such, optimizing the use and maintaining gas pipelines and cylinders to transport CO2 is one of the biggest challenges for carbon dioxide suppliers, which is expected to hamper market growth to some extent over the coming years.

Which country accounts for more enhanced demand for the Carbon Dioxide Market?

Growth of the chemical industry and high use of carbon dioxide as an inert gas in chemical processes are supporting market growth. Also, rising production and consumption of oil & gas have led to augmented demand for carbon dioxide to be injected into oil reservoirs for the recovery of additional oil.

Furthermore, application of carbon dioxide in the food & beverage industry to control atmospheric storage and preserve food and other applications, such as freezing, chilling, etc., will support country-level market growth over the coming years.

Why is Centralized Delivery of Carbon Dioxide More Preferred in Europe?

The European carbon dioxide market, under delivery mode, is segmented into centralized and onsite.

The centralized delivery mode holds 54.2% share in the market. The segment is predicted to rise at 7.7% CAGR over the assessment period, with pipelines, trucks, and cylinders taking center stage. The transportation of carbon dioxide by pipelines is set to gain immense traction over the coming years.

The onsite delivery mode of carbon dioxide holds 45.8% share in the market and is projected to rise at the rate of 11.5% through 2032.

Amongst them, the food & beverage industry holds a dominant market share of 49.5%. The segment is predicted to expand rapidly at 8.1% CAGR through 2032.

The next leading segments - oil & gas industry and metal manufacturing - hold 11.9% and 11.5% shares, respectively in the European market. These segments are poised to evolve at 5.1% and 6.3% CAGRs over the next ten years.

Rising consumption of carbon dioxide in food & beverage, metal manufacturing & fabrication, oil & gas, etc., is supporting demand growth. Furthermore, manufacturers are looking out for ways to remove carbon dioxide from the air and use it for commercial benefits.

Prominent manufacturers of carbon dioxide in Europe are investing in the research and development of better technologies to augment product output. They are undertaking marketing strategies such as organic and inorganic growth strategies, expansion activities, and acquisitions, along with novel technology development and achieving superior operational efficiency to maintain their market presence.

What is the Europe carbon dioxide market size?

How did the market evolve over the past 4 years?

Who are key suppliers of carbon dioxide in Europe?

Which European country leads the carbon dioxide market in the region?

Germany leads the European market for carbon dioxide accounting for 26.1% market share in 2022.

Which end-use industry accounts for the highest consumption of carbon dioxide?

The food & beverage industry accounts for 49.5% share of the consumption of carbon dioxide in Europe.

The carbon fiber filament market is set to witness strong growth during 2018-2028. The rise in deman...

The carbon fiber tape market is poised to grow at a 10% CAGR throughout 2030. The aerospace and auto...