Ice stakes and helmets are the most popular among all ice hockey equipment and are estimated to contribute more than 60% to the overall market growth in forecast period.

Ice hockey has overcome all obstacles to become one of the most well-liked and wealthy professional sports league in the world despite being a seasonal sport. Ice hockey equipment has observed substantial demand in North America and Europe during the historical period.

In addition, the growth of artificial ice rinks around the world has increased the demand for ice hockey equipment. Asia and the Middle East now have access to this sport, thanks to the synthetic ice rink boom across these two regions. Fact.MR suggests, in the upcoming years, this trend has huge potential to dominate the market.

The global ice hockey equipment market is predicted to surge ahead at a CAGR of 6.4% by the end of 2032, suggests Fact.MR analyst.

Over the 2017-2021 historical period, the global ice hockey equipment market registered a CAGR of 3.7%, and according to the Fact.MR, a market research and competitive intelligence provider, the market is projected to exhibit growth at 6.4% CAGR between 2022 and 2032. 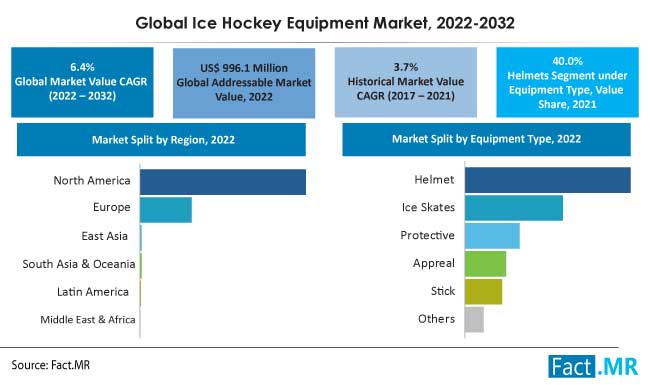 Ice hockey's original limits were extremely distinct before. Its availability was restricted from some areas, including Asia, the Middle East, and Africa, because it can only be played where there is naturally occurring ice. However, the development of synthetic ice rinks has made it possible for the aforementioned regions to access the climatically unfavourable sports like ice hockey. Additionally, due to these areas' dense populations, the target market has a lot of room to grow a significant customer base.

Furthermore, the noticeable increase in ice hockey players as a result of the sport's rising popularity has significantly boosted sales of the ice hockey equipment in these regions. Another element that contributes to the target product market's good growth trajectory is the prevalence and expansion of women's ice hockey on a global scale.

The target market has grown as a result of manufacturers implementing digital platforms more frequently to guarantee their products' regional and global accessibility. In order to stay competitive, the key players are investing more in research and development activities. As a result, the demand for target product will upsurge during the forecast period.

Furthermore, the government's supportive actions to promote ice hockey in an effort to spur interest and involvement in sports will help the target product's market growth. The Public Health Agency of Canada (PHAC), for instance, has committed up to US$ 2 Million support to the national expansion of Western University's Hockey Fans in Training (Hockey FIT) program. By incorporating participants' adoration of hockey into the campaign, this program hopes to inspire Canadian adult males to eat better meals and be more active.

What Do Ice Hockey Equipment Manufacturers Need to Watch Out for?

Spending on recreational items, including ice hockey equipment, is anticipated to decline as a result of rising inflation. Inflation also causes customers to adopt a more pessimistic behavioral pattern than an optimistic one, which has a direct impact on how much they spend on the desired product. As a result, the target market can experience growth difficulties.

The significant risk of acute injuries in ice hockey also has an effect on the general public's willingness to play the game. Therefore, the significant danger of accidents is probably going to prevent the ice hockey equipment market from expanding during the anticipated time.

The depth of the talent pool and the viewing audience both increase as the sport becomes more popular on a global scale. While Canada is still a major player on the global stage, the U.S., Germany, and Switzerland have made significant strides and provide another pool of players from which to choose. Due to greater sales in Canada, where ice hockey is the national sport, the target product market will experience tremendous growth in the next years. North America will thus come to dominate this market.

Significant prospects are presented by the region's eye-catching expansion of sports institutes and academies. The target product market in the region is projected to grow as a result of the government and end user businesses' exploratory efforts such as “try hockey for free day”, which is an initiative to attract youth towards the game. In addition, sales of ice hockey equipment in the United States have a lot of potential in the upcoming years due to advancements in safety standards and technologies as well as new legislation in the country.

Why is Asia Pacific Hockey Equipment Market Expected to Be Highly Lucrative?

During the projection period, the market in Asia Pacific is anticipated to pace rapidly, followed by the MEA and Europe.

With substantial spending on leisure activities and a consequent rise in ice hockey popularity in China, South Korea, Japan, Australia, New Zealand, and India, Asia Pacific is considered as a growing market.

Increasing accessibility of the sport and consequent increase in interest of the population in ice hockey in Asia Pacific region is expected to offer the most lucrative growth opportunities for the market growth.

By the end of 2032, the Asia Pacific ice hockey equipment market is anticipated to grow with a CAGR of 5.4% during the assessment period.

Which Protective Equipment Will Generate High Revenue Growth during the Assessment Period?

As per Fact.MR analysis, helmet accounts for a major share of the total sales and is expected to be worth of US$ 804.7 Million by the end of 2032.

Helmet is considered of utmost importance in ice hockey since players on ice are most vulnerable to the head injuries. Accidental contact does happen occasionally, even in no-contact leagues like Shinny. Players can significantly reduce their risk of injury from collisions with the ice, the boards, or other players by donning a helmet. In the end, both players and spectators want to be able to enjoy hockey without having to worry about getting hurt, making helmet- the most popular protective equipment.

Will Market Growth Be Led by Sales Via Product Stores?

By 2032, ice hockey product sales through product stores are anticipated to increase at a remarkable CAGR of 7.4% since 2022.

For manufacturers of ice hockey equipment, new growth opportunities are being opened up by consumer demand for buying products through a variety of retail channels. The availability of top ice hockey equipment brands across e-commerce platforms has been gaining substantial momentum, even though sales through ice hockey product stores still have a strong influence on growth.

Due to the presence of various international and regional competitors, the market for ice hockey equipment is quite competitive. To support their position, key firms use a variety of techniques, including product portfolio growth and collaborations with regional sports academy. Customization of equipment to fit the team goals has accelerated B2B sales for the manufacturers.

Worldwide demand for ice hockey equipment is anticipated to reach US$ 1,844.0 Million by 2032-end.

North America tops the global ice hockey equipment market and is expected to account for 74.8% market share in 2022.

*94 figures and 111 tables includes by FactMR