Number of applications for polyamide resins have been increasing over past half-decade. Similar trend is estimated for usage of adhesives and various fuel oil additives. Use of hot melt adhesives on wood, PVC, metal, surface treated polypropylene, paper and polyethylene escalated its market growth. All the aforementioned applications are considerably driving the market.

Dimeric fatty acids, which are also known as di-carboxylic acids, are non-toxic, bifunctional acids obtained by dimerizing Tall Oil Fatty Acids (TOFA). They are light yellow-transparent liquids, which can help in improving water repellency, hydrolytic stability and pigment wetting properties of polymers, commonly used as a rheology controller, or polymer building block in the synthesis of polyamide hot melt adhesives and polyamide resins.

Over 80-85% of dimeric fatty acid is manufactured using tall oil fatty acids (TOFA), which is obtained as a by-product of the Kraft wood pulping process. However, the production of TOFA has declined steadily over the past few years owing to the palpable shift of manufacturers towards pulping younger pine trees with lower chemical content.

According to Fact.MR., historically, from 2017 to 2021, demand for dimeric fatty acid increased at a CAGR of 4.6%, wherein, countries such as China, India, Japan, United States and Thailand held a noteworthy share in the global market.

The global dimeric fatty acid market has evolved significantly in recent years, on the back of increasing investments in new technologies to overcome performance and quality issues associated with the manufacturing of dimeric fatty acid. Leading dimeric fatty acid manufacturers are focusing on testing in-depth new production techniques, thereby targeting the emerging market, to capitalize on the burgeoning demand.

Globally the growing consumption of polyamide resins and increasing applications of fuel oil additives and reactive adhesives are driving the overall market growth of dimeric fatty acid over the past half-decade.

Based on the aforementioned factors, the global dimeric fatty acid market is anticipated to grow at a CAGR of 5.7% over the long-term forecast period (2022-2032).

Below are some of the key developments in the dimeric fatty acid market:

What are the Prominent Driving Factors of the Dimeric Fatty Acid?

With the growing awareness about negative impacts of industrialization on the environment, a majority of end-users across various industrial sectors are assessing the environmental footprint of their actions.

Dimeric fatty acid is commonly used in the adhesive industry and coatings & ink industry. An increasing number of environmentally aware businesses in these industries are shifting to bio-based raw materials.

The Government of Canada declared in one of its documents that “there is low risk of harm to the environment from fatty acids and its derivatives, which also includes dimeric fatty acids.

Thereby, dimeric fatty acid is considered to have lower environmental footprint and less stringent regulatory framework is easing out its adoption across various industrial verticals.

What makes China a Prominent Market for Dimeric fatty acid? 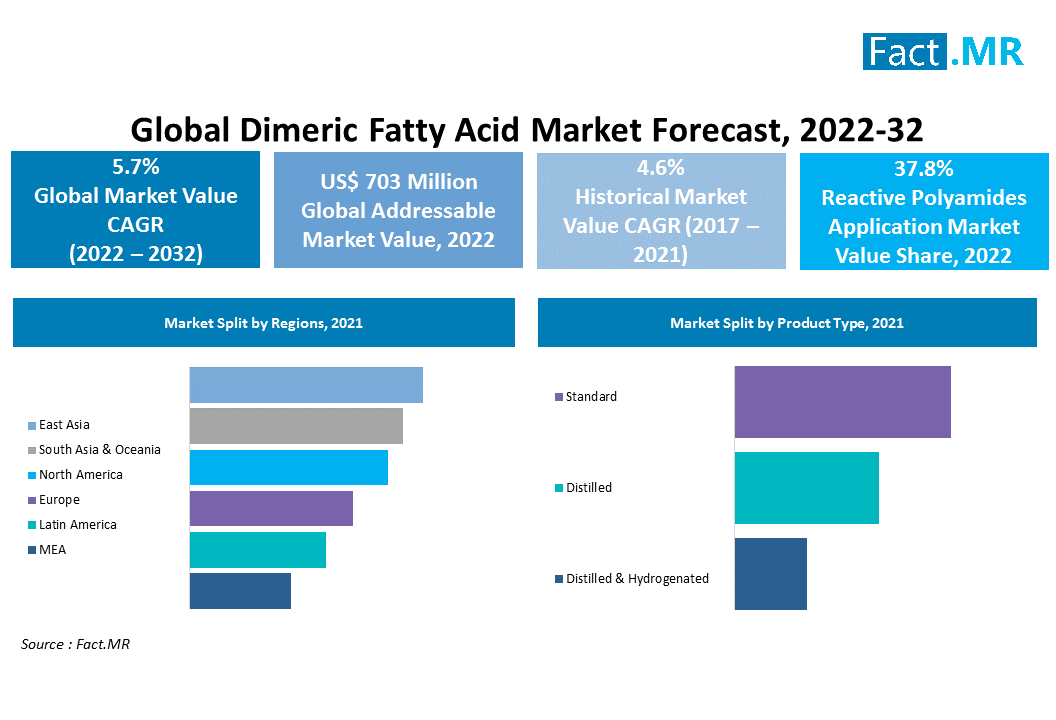 With most customers in various industrial verticals becoming aware about the unique benefits of polymer-based hot adhesives over solvent-based adhesives, their demand is expected to surge in the upcoming years, in turn, boosting sales of dimeric fatty acid.

What Makes the Consumption of Dimeric Fatty Acid is Largest in Non-reactive Polyamides Application?

With the burgeoning growth of water transportation and shipping industry, the adoption of marine coatings is expected to upsurge, thereby creating lucrative opportunities for dimeric fatty acid-based water-resistant coatings.

The study finds that Tier 1 players account for around 32% share in the dimeric fatty acid market and the market remains highly fragmented among local players.

Meanwhile, Tier 2 and 3 players are competing on price in regional markets for dimeric fatty acid.

As the dimeric fatty acid market is highly fragmented among small or medium-level market players, they are aiming to expand their businesses in the international markets to envisage incremental growth in the upcoming years.

*102 figures and 62 tables includes by FactMR