Sales of 3-in-1 beverages accounted for more than 40% of the global ready-to-drink beverage premix market at the end of 2021.

3-in-1 beverages have all the ingredients mixed in a proportionate ratio in the form of powder. They are dehydrated premixes that can be made into drinks by just adding hot water or other solvents. They are easy to prepare in less time.

In addition, 3-in-1 beverages enhance functionality and boost the metabolism of the human body, thereby providing health benefits to consumers. The combined use of coffee premixes and tea premixes has increased by a compound annual growth rate of 4% from 2017 to 2021, which has greatly influenced the sales of 3-in-1 beverages in the market. This increase in the consumption of coffee and tea among the population is considered a key driver for the 3-in-1 beverage market.

The ease to carry anywhere as well as the variety of flavors and types provided by 3-in-1 beverages promote the development of more sophisticated, efficient, and easy-to-drink beverages, which is driving several key players to manufacture products and directly accelerate the growth of the 3-in-1 beverage market.

From 2017 to 2021, the global 3-in-1 beverage market registered a CAGR of 4%, as per findings by Fact.MR, a market research and competitive intelligence provider. Worldwide sales of 3-in-1 drinks are projected to increase at 4.2% CAGR through 2032. 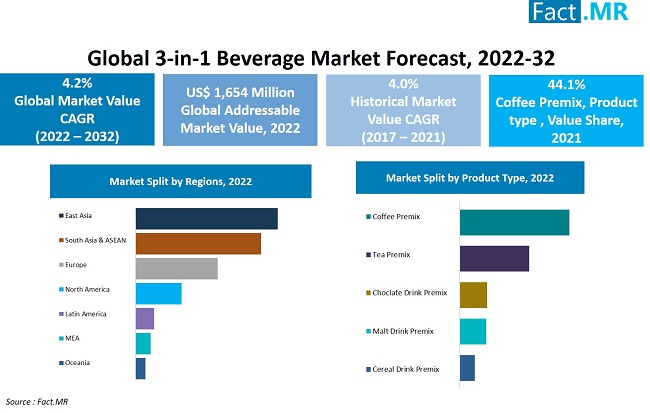 Market share analysis of 3-in-1 beverages based on product type and region is provided in the above image. Under the product type segment, the coffee premix segment currently dominates with 44.1% market share.

Why is Demand for 3-in-1 Beverage Rising Steadily across the World?

Traditional coffee and tea are the most enjoyed beverages among users across regions. With technological advancements introduced in the market, manufacturers are bringing these traditional drinks to consumers at their fingertips along with some additional features, namely, ready-to-go drinks (3-in-1) with simple packaging (sachets).

Changing lifestyles along with increased consumption of beverages such as coffee, tea, malted drinks, etc., are being witnessed due to the endless styles and varieties provided by manufacturers in their products. Therefore, in this fast-moving world, 3-in-1 beverages are gaining the high attention of consumers, mainly because they save time during preparation.

“Longer Shelf life of 3-in-1 Beverages”

In reality, 3-in-1 beverages don’t expire since they are devoid of any moisture content. If stored properly, preventing them from exposure to moisture, 3-in-1 beverages can be consumed within 12 to 18 months after they are manufactured. This enables consumers to make beverages at home or offices within no time without the fear of expiry.

This characteristic has helped 3-in-beverages gain popularity among consumers, thereby having a positive impact on market growth.

What Issue Do 3-in-1 Beverage Producers Need to Contend With?

The shelf life and other features of 3-in-1 beverage premixes have increased with the use of preservatives and other chemical substances. However, these additional preservatives are bad for human health.

Expansion of the global 3-in-1 beverage market is anticipated to be constrained due to rising consumer awareness of dangerous chemical components in 3-in-1 beverage premixes.

If an individual consumes 3 packets of 3-in-1 beverage drinks per day, it is equal to 600 calories, which can lead to obesity and heart-related diseases in the population.

In addition, they have several other effects on the body, namely, lower stimulating properties, reduction in absorption of iron, and rapid increase in blood sugar levels due to the presence of sugar and glucose syrup in the premixes.

Will High Popularity of Sachet Packaging Type in East Asia Complement Demand for 3-in-1 Beverages?

The East Asia 3-in-1 beverage market is estimated to hold the largest market share in 2022. This dominance is expected to continue over the forecast period with the market progressing at a CAGR of 3.7% from 2022 to 2032.

East Asia is considered one of the world's most populated regions with the food & beverage sector playing a major role, which will have a positive impact on the 3-in-1 beverage market. Rapid development of East Asia’s food & beverage industry presents significant opportunities for 3-in-1 market players.

Consumers' growing awareness of added preservatives presents a chance for manufacturers to release a preservative-free premix in the market. Key players are investing in R&D to create new premixes with fresh flavours.

Which European 3-in-1 Beverage Markets are Expected to Be Highly Lucrative?

The Europe 3-in-1 beverage market accounted for 18.7% of the global market share at the end of 2021. Three distinct systems have mostly been adopted in Europe: single-payer, socialized, and privatized but regulated. This creates a substantial market opportunity for 3-in-1 beverage suppliers.

Steady increase in consumption outside the home has contributed to the rapid growth of the European market. It is stated that Europe accounted for 33% of global coffee consumption in 2020-2021, amounting to an estimated 3.244 million tons of coffee.

Which 3-in-1 Beverage Product Type is Most Widely Consumed?

Amongst them, coffee premix, a proportionate mixture of milk powder, coffee powder, and sugar, held the highest market share of 44.1% in 2021 and is projected to exhibit a CAGR of 4% during the forecast years.

The market for coffee premixes is seeing tremendous growth as a result of the rising demand for both, personal consumption and from Quick Service Restaurants (QSRs). Due to benefits such as cost-effectiveness and time saving, customers' purchasing behaviors are shifting away from traditional beverages towards 3-in-1 alternatives.

Keeping these benefits in mind, key players have introduced coffee premixes that can be turned into drinks by just adding hot water to them, in light of these benefits.

Major manufacturers of 3-in-1 beverage products are employing innovative technologies and optimization systems. Key manufacturers are focusing on developing new products with innovative packaging as well as a blend of flavors in their drinks.

Fact.MR has provided detailed information about the price points of key manufacturers of 3-in-1 beverages positioned across regions, sales growth, production capacity, and speculative technological expansion, in the recently published report.

Segmentation of 3-in-1 Beverage Industry Research

What is the stance of the global 3-in-1 beverage market?

How is the market for 3-in-1 beverages expected to fare?

How did the market evolve over the past few years?

Which 3-in-1 beverage type is most widely consumed?

Global Beverage Carrier Rings Market is expected to expand at a CAGR of nearly 5% during the forecas...

The global beverage vending machines market is expected to grow at an impressive CAGR during 2021-20...

Beverage Encapsulants Market is set to witness healthy growth by 2028. The rising demand for functio...