Global consumption of malt beverages is currently valued at around US$ 24.34 billion and is anticipated to increase at a CAGR of 3.7% through 2032. As such, the global malt beverage market is expected to reach a valuation of US$ 35.17 billion by the end of 2032.

Malted hops and malted barley are fermented to create malt beverages. There are also many other carbs and additional grains, both malted and unmalted.

These products occasionally have flavours added by different, palatable food items. The beverage may have alcohol in it or may not. The malt is rich in B vitamins, several minerals, a specific protein, and fibre.

Malt is often used as a healthier alternative sweetener since it has a mild sweetness similar to that of sugar. The cereals are typically dehydrated, heated, and turned into a dry powder before being submerged in water for germination.

Due to a growing consumer preference for flavoured beverages and drinks, the global market for malt beverages is expanding significantly. 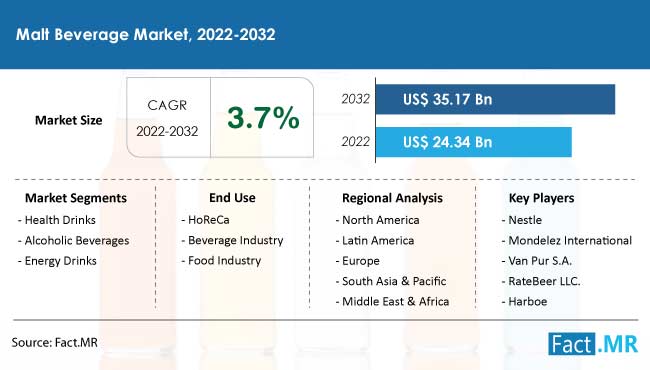 What is Driving the Sales Growth of Malt Beverages?

How are New Entrants Evolving in the Malt Beverage Market?

“Experimentation on Taste of Malt Drinks – An Opportunity for New Manufacturers”

It is very obvious that the organic trend is on the rise and has been expanding tremendously given the rising demand for organic beverages from customers and the use of organic cereals by beverage and baby food makers.

Over the coming years, participants in the malt beverages market will benefit from increased R&D efforts for the creation of unique, inventive goods, as well as the addition of novel items to their portfolios; this strategy is being pursued by both, existing players and new entrants.

Which Regional Market is Profitable for Malt Beverage Manufacturers?

The U.S. is one of the biggest markets for malt beverages in North America. During the assessment period of 2022–2032, the U.S. malt beverage market is anticipated to follow its historical pattern of boom. In 2022, North America is expected to account for 21.3% of the global market share.

Due to their emergence as unique beverages that sit in between the prevalence of both alcohol and beer, seasoned malt drinks are gaining enormous popularity on the market.

Sales are predicted to increase steadily over the forecast period due to the growing popularity of "alternative beverage liquor" drinks that include hard seltzers, ciders, and seasoned malt drinks.

One of the main factors supporting the malt beverage industry is rising awareness of the advantages of malt-based beverages through various promotional campaigns and the launch of new product varieties.

A sizable share of the demand in Europe is satisfied by France due to a large number of producers and customers who are positioned in the nation. With increasing consumer density, the country's potential is expected to expand in the long-term prediction.

“High Consumption of Alcoholic Malt Drinks to Continue across the World”

By product type, the market for alcoholic beverages is anticipated to hold the highest market share of the global market for malt beverages in 2022 and dominate all other product segments over the forecasted period.

This high demand is a result of the widespread consumption of malt drinks such as beer and wine in several industrialized nations and areas, such as the United Kingdom, Germany, the United States, etc.

Manufacturers of malt drinks are concentrating on producing beverages with exquisite flavours and state-of-the-art packaging while they are in transit for quality marks and production.

What is the predicted malt beverage market size for 2032?

Who are the top 3 malt beverage manufacturers?

Freezer & Beverage and Wine Cooler Market is set to witness healthy growth by 2026. The rising consu...

The global beverage vending machines market is expected to grow at an impressive CAGR during 2021-20...

Beverage Encapsulants Market is set to witness healthy growth by 2028. The rising demand for functio...