The global mindfulness meditation apps market is projected to hold a market value of US$ 180 Mn by 2032. The market is anticipated to exhibit a CAGR of 8.4% during the forecast period from 2022 to 2032.

Mindfulness meditation apps help an individual to achieve peacefulness through mental training practices that involves meditation, deep breathing, and other exercises. These apps aid in practicing self-regulation and self- awareness which is expected to drive the demand for these apps.

Meditation apps also provide animation videos, tracker, and remainder for the users. This factor is anticipated to bolster the industry in the assessment time. These apps have also been introduced by the education institutes, which help in developing self-awareness, concentration among students. Furthermore, the growing cases of anxiety due to COVID-19 are also likely to play a significant role in bolstering the market in the coming time.

Growing cases of depression, anxiety, mood disorders among the youth is expected to play a salient role in developing the market in the coming time.

As per the analysis by Fact MR, the demand for mindfulness meditation apps enhanced increased by 8% from 2016 to 2020. The growing adoption of unhealthy lifestyle is likely to promote usage of meditation apps.

Further, the outbreak of COVID-19 has augmented stress which enhanced anxiety levels amongst individuals. Therefore, usage of such apps has increased since then. The market is anticipated to achieve a market value surpassing US$ 180 Mn by the end of 2032, witnessing a CAGR of 8.4% through 2022-2032.

How is Stress and Depression Boosting Demand for Mindfulness Meditation Apps?

As per American Psychological Association, today’s youth are the most stressed age group in 21st century. Millennial are reaching technology and smartphones to relax their minds. Therefore, the global market has experienced a significant boost in the download of such mindful apps. Further, the increasing desire to obtain a healthy lifestyle owing to the enhanced exposure to social media has also made a remarkable impact on the youth.

The World Health Organization reveals that nearly 246 million people across the world suffer from depression. Anxiety, bipolar disorder, and other mental health related issues are the most common problems faced by today’s generation.

Issued related to finance, relationship problems, work related stress have made significant contribution in increasing stress level in an individual. This is projected to be another crucial factor that can boost the usage of medication apps, thereby boosting the market.

The ease of using mindfulness meditation apps from one’s comfort zone is the biggest advantage to the users. Features such as audios, videos, live interaction, and personal guidance workshops are expected to enhance their demand among the youth.

Moreover, app developers are also providing other facilities such as; generating reports, reminders, and customized charts, which attracts the users and boosts the demand for such apps.

These apps keep a record of internal physical changes which produces genuine results. These apps have been designed in a way that it also offers weekly and monthly progress of an individual. Such features embedded by the app developers have surged the demand of the mindful apps.

How popular are Mindfulness Meditation Apps in North America?

As per the analysis by Fact MR, in North America, the U.S and Canada are projected to make the most significant contribution in developing the regional market. The U.S market is likely to exhibit a CAGR of 5% by 2032.

Further, in the U.S the number of patients dealing with depression, anxiety, and other mental disorders are likely to account for more than 40 Mn people, which is anticipated to be another potent cause enhancing the demand for mindful apps.

Canada is projected to be another lucrative market in the region. The increasing incidences of depression among youth and college going students can surge the demand for mindfulness meditation apps. Also, the growing popularity of spirituality and yoga is expected to grow the demand for such apps, thereby bolstering the regional market.

Why is India Expected to be a Significant Market?

As per the analysis by Fact MR, India is projected to expand at a CAGR of 7% by 2032. India is predicted to be one of the most lucrative markets across the globe. India is the home to spiritual and mindful practices such as Yoga.

The growing popularity of Yoga and mystic gurus has encouraged the youth to opt for such meditation apps. In addition, initiatives by the Indian Government, such as, celebrating Yoga Day has further motivated youth and adults to indulge into such practices.

Also, the robust penetration of smartphones across the country has exposed people of remote areas too to explore such apps. Therefore, India has been spotted as one of the most lucrative markets across the globe. 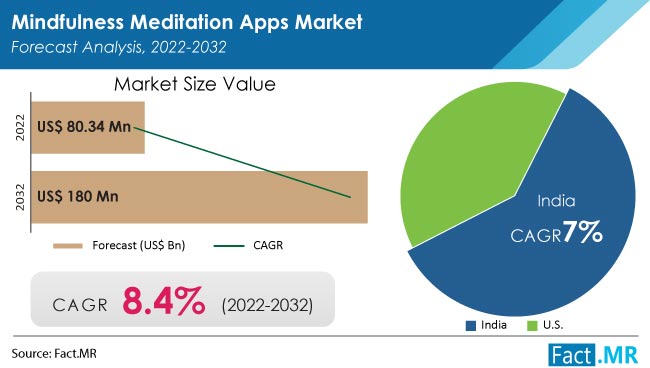 Why do Users Prefer Free of Cost Mindfulness Meditation Apps?

According to Fact.MR, demand for free mindfulness meditation apps are expected to soar. It is easier to test, user, and try free apps, therefore users go for such free of cost apps. It is beneficial for the users and the company.

Since free apps do not demand money, it becomes easier for the user to delete the app as per their requirement. Free mindfulness meditation apps are anticipated to garner about 40% of the revenue through the assessment period.

The mindfulness meditation apps industry analysis experts say that app users tend to show notable inclination towards paid meditation apps. The reason can be attributed to the access to extensive features of the app. The paid apps are anticipated to exhibit a CAGR of 8% during the forecast period from 2032.

What is the Impact of COVID-19 on the Global Mindfulness Meditation Apps?

The outbreak of COVID-19 caused a severe mental stress to humans. The sudden global lockdown caused humans to suffer from various mental health issues such as anxiety, depression, and other disorders. The inability to go outside their residences, people across the globe suffered mentally. This mental stress resulted into a gradual shift towards spirituality, Yoga, and meditation. Therefore, the popularity of these apps increased significantly during the COVID-19 lockdown.

Various players in the mindfulness meditation app are focusing on offering various features that is likely to give them an upper hand against their competitors. Majority of companies are focused on expansions, investments, acquisitions, delivery, portfolio expansion, and brand development. Key players also have a strong position in the global market with a large set of customers, which springs them with an edge over their competitors in the market.

How much worth is projected for the mindfulness meditation apps market for 2022?

As of 2022, the global mindfulness meditation apps market is slated to reach US$ 80.34 Mn

At what rate is the mindfulness meditation apps landscape likely to grow?

From 2022 to 2032, the mindfulness meditation apps industry is projected to surge at an 8.4% CAGR

What was the last 5 years CAGR for the market on mindfulness meditation apps?

According to Fact.MR, the mindfulness meditation apps industry grew at a CAGR of 8% from 2017 to 2021

At what value will mindfulness meditation apps close in by the year 2032?

By 2032, the value of mindfulness meditation apps is slated to reach US$ 180 Mn

What are the growth prospects for mindfulness meditation apps in the U.S?

The U.S is expected to emerge as an important region for mindfulness meditation apps proliferation, growing at 5% CAGR from 2022-2032

How is India expected to perform with respect to mindfulness meditation apps demand?

India is the fastest growing mindfulness meditation apps market, expected to surge at a 7% CAGR, according to Fact.MR

Which type of mindfulness meditation apps will be the most popular?