The global depression drugs market reached a valuation of around US$ 13 Bn in 2020, which amounts to close to 50% share of the psychotropic drugs market.

Sales of depression drugs are slated to accelerate at a CAGR of 4% to top US$ 20 Bn by 2031. Demand for serotonin-norepinephrine reuptake inhibitors (SNRIs), which hold the highest market share, is set to increase at a CAGR of 2% across the assessment period of 2021 to 2031.

As per Fact.MR, a market research and competitive intelligence provider, the global market for depression drugs was valued at US$ 13 Bn in 2020.

According to the World Health Organization (WHO), depression is one of the primary causes of disability, affecting more than 350 Mn people worldwide. Major factors driving growth of the depression medications market are the rising prevalence of mental diseases such as social anxiety and depression and increasing demand for serotonin-norepinephrine reuptake inhibitors (SNRIs).

Discovery of innovative approaches for development of tricyclic antidepressants with minimum side effects and long-term results, together with rising acceptance of new treatments, is expected to propel market expansion over the coming years.

Government measures to make basic treatment for all mental health issues more accessible will help the market expansion. Furthermore, rising concern about the disease condition and essential therapeutic demands, increase in the number of people suffering from stress, and rising sales of CNS stimulants are driving the market growth.

Latest trends of depression drugs, the presence of top distributors of antidepressants, and growing sales of selective serotonin reuptake inhibitors (SSRIs) are driving the market growth.

Traditional depression-managing medications and treatments have a low success rate, with just 40% of patients reportedly recovering. These concerns have driven academics, scientists, and medication makers to look for novel approaches to improve the efficacy of major depressive disorder treatments.

Over the last few years, advances in the neuroscience of depression have opened up new anxiety disorders and depression treatment options. Moreover, market players are actively focusing on the development of novel non-pharmacologic and pharmacologic therapies in the existing mental health drugs market.

Growing demand for tricyclic antidepressants, rising sales of selective serotonin reuptake inhibitors (SSRIs), and increasing use of antidepressants are driving the market growth.

Several international research projects are increasingly assisting in the creation of new pharmaceuticals, treatments, and cures. The overall growth of the depression medicines market is likely to be influenced by research and development initiatives.

Will Side Effects of Depression Drugs Create Reluctance among Patients?

Depression medications lose their efficacy after a few months or years since the brain becomes less responsive to such drugs. As a result, the normal brain functions begin to hamper.

Symptoms such as blurred vision, vivid dreams, insomnia, fatigue, dizziness, and loss of coordination are observed by the patients who discontinue the intake of antidepressants. These after-effects caused by depression medications are anticipated to limit the growth of the global depression medicines market.

Which is the Most Profitable Regional Market for Depression Drug Manufacturers?

North America is likely to be a major revenue-generating region. Revenue from the North American regional market is projected to expand 1.3X by 2031.

North America constitutes the largest share of the global antidepressant market, given the high concentration of established market players who are focusing on enhancing the efficiency of mental health drugs.

Rise in awareness pertaining to anxiety disorders and depression treatment created by mental healthcare organizations, growing online sales of CNS stimulants, and increasing adoption of depression medications are expected to drive growth of the market in this region. 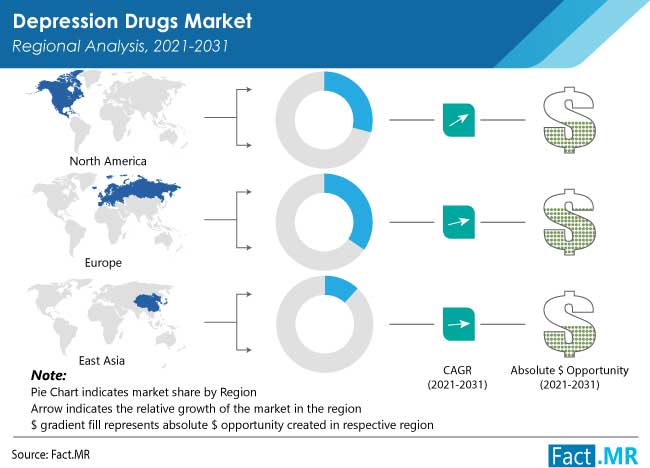 What is the Demand Outlook for Depression Drugs in the U.S.?

The U.S. market for depression drugs is expected to increase 1.5X by 2031.  In the United States, the geriatric population is growing, which is likely to open up additional chances for market players.

According to the Anxiety and Depression Association of America's Facts and Statistics., anxiety disorder is among the most prevalent mental illnesses in the United States, affecting around 40 Mn American adults each year, or 18.1% of the total population of the country.

In addition, more than 16.1 million persons in the United States suffer from severe depressive illness each year, with women having a higher prevalence than males.

As a result, growing frequency of illnesses, the rising rate of antidepressant consumption, and the presence of depression drug manufacturers are projected to fuel the market growth in the U.S. over the forecast period.

How Lucrative is the Market for Depression Drugs in China?

Increasing R&D investments by government and market participants, development of novel medications for anxiety and depression-related diseases, and increasing demand for branded antidepressants are expected to drive the market expansion in China.

The market in China is expanding due to rising sales of atypical antipsychotics among adults, growing demand for serotonin antagonist and reuptake inhibitors, and increasing frequency of depressive syndromes among the younger population.

Why are Serotonin-norepinephrine Reuptake Inhibitors (SNRIs) in Such High Demand?

Serotonin-norepinephrine reuptake inhibitors (SNRIs) is expected to contribute the largest share in the market. Sales of SNRIs are expected to increase 2X over the forecast period.

While these medications are often thought of as a group of interconnected antidepressants based on reuptake inhibition, their chemical structures and pharmacological effects range significantly.

Patients with anxiety and depressive disorders are treated with SNRIs as a second-line medication. Growing applications in the treatment of abnormal psychological alterations with improved efficacy will boost the demand for serotonin-norepinephrine reuptake inhibitors. These medications have also been shown to be useful in the treatment of long-term nerve discomfort in anxiety disorders.

How is Rising Incidence of Major Depressive Disorders among Populations Driving Market Growth?

According to the Substance Abuse and Mental Health Services Association, adolescents aged 12 to 17 years old had the greatest prevalence of major depressive disorder (MDD), followed by adults aged 18 to 25 years old.

Growing prevalence of major depressive disorder as well as rising awareness regarding depression therapy and management among the younger population is driving the growth of the antidepressant drugs market.

The COVID-19 pandemic is predicted to have an impact on the general expansion of the depression medications industry since a growing number of people suffering from mental illnesses are turning to prescription drugs like benzodiazepines and antidepressants.

Furthermore, as a precautionary measure to prevent the spread of the novel coronavirus, governments in various countries have instituted lockdowns, the demand for antianxiety drugs has increased significantly.

As a result, the antidepressant drugs market is likely to have a large impact during the COVID-19 crisis, given the rising incidence of depression and anxiety among the global population as a result of the pandemic.

The number of antidepressant prescriptions increased significantly in the first two quarters of 2020, and this trend is expected to continue in the post-pandemic era.

Top manufacturers in the depression drugs market are adopting sustainable growth strategies to diversify their product portfolio, sustain their position in the global market, intensify their customer base, and garner share in the global depression medicines market.

What is the current global market worth for depression drugs?

The global depression drugs market is currently worth more than US$ 13 Bn.

What was the last 5 year’s market CAGR for the sales of depression drugs?

What are key trends likely to influence sales of depression drugs?

Rise in prevalence of depression and growing geriatric population are major factors driving growth of the market.

Who are the prominent manufacturers of depression drugs?

Which region is most attractive for depression drug vendors?

With 40% share, North America will largely contribute to the growth of depression drugs revenue.

How lucrative is the opportunity for market expansion in Germany?

Sales of antidepressants in Germany are expected to rise at a CAGR of 1% over the forecast period of 2021 to 2031.

Which drug class has the largest share in the market for depression drugs?

Which are the top 5 countries driving demand for depression drugs?

The U.S., China, U.K, Germany, and France are expected to drive most of the demand for depression drugs.

Which distribution channel is expected to hold the highest share for the sales for depression drugs?

Online pharmacies are expected to hold more than 40% market share for depression drugs.

What is the predicted expansion rate for the market over the next ten years?

At present, the drainage bottles industry is worth more than US$ 473.3 Mn and is expected to reach a...