The trend of developing generic drugs holds relevance for prominent players such as Teva Pharmaceutical Industries Ltd. and Mylan N.V., who generate a sizeable revenue (around 58% market share) through the sales of generic products. 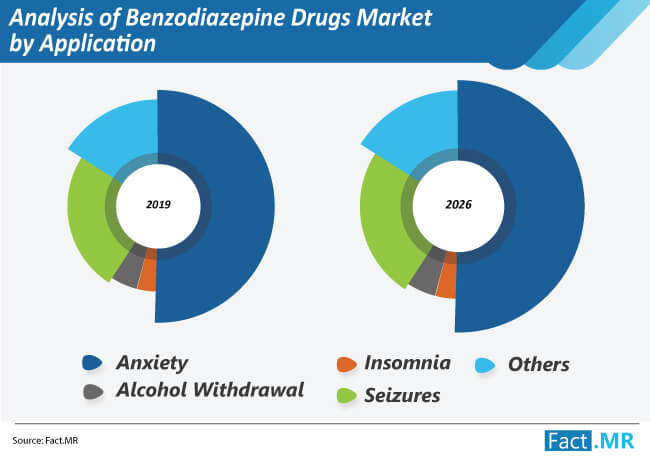 Benzodiazepine drugs are a single panacea to numerous disorders such as anxiety, insomnia, and seizures, which continues to catalyse sales through multiple applications. Growing awareness about the side-effects of psychoactive drugs, in turn, increases the adoption of relatively safe benzodiazepine drugs.

Considering the relevance of these crucial dynamics, a comprehensive study by Fact.MR opines that, demand for benzodiazepine drugs would remain high-albeit generic ones-which would drive voluminous sales, though contribute moderately to market value.

That being said, the benzodiazepine drugs market is expected to record a pedestrian CAGR of around 2.7% during the forecast period (2020-2026).

A cohort of factors such as increasing benzodiazepine drug abuse and several reported cases of overdose leading to death, apart from increase in popularity of generic drugs, is resulting in sluggish growth of the market.

These drugs produce a calming effect, which leads to drug abuse, and, in turn, increases drug dependency. 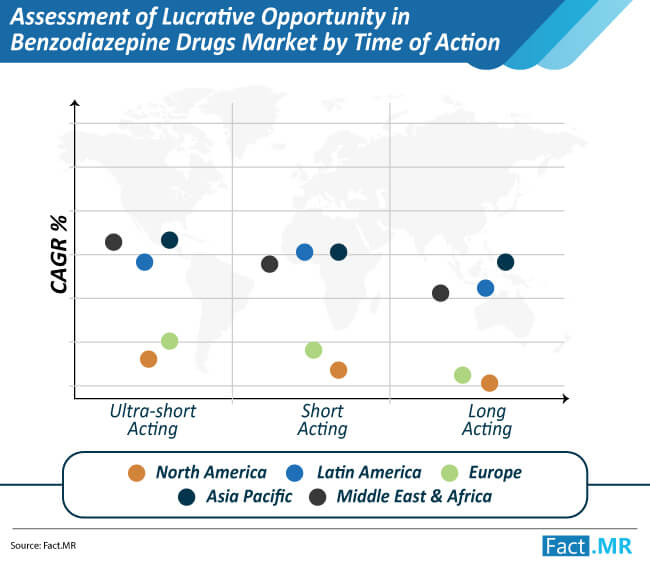 Long-term consumption of benzodiazepine drugs is found to cause breathing problems, dizziness, weakness, tremors, pneumonia, brain damage, and in extreme cases, can also lead to death.

According to the National Institute on Drug Abuse, the year 2017 witnessed around 11,537 deaths caused by the overdose of benzodiazepine drugs. In response to such incidence, various government bodies now regulate prescription of the drug, further hampering market growth.

North America is a key benzodiazepine drugs market, with high consumption of these drugs for the treatment of anxiety disorders.

According to the Anxiety and Depression Association, anxiety disorders affect around 40 million adults in the U.S., every year, which is likely to increase adoption, as consciousness regarding quality treatment grows among individuals.

However, the impact of stringent regulations against drug abuse is such that, sales of benzodiazepine drugs receive closure through retail and hospital pharmacies, as these drugs require a proper prescription.

This, when compared to relatively lenient regulations in Asia Pacific and Latin America, sales of benzodiazepine drugs through online pharmacies are projected to witness a CAGR of around 3.5% and 3.4%, respectively.

Who are the prominent players of Benzodiazepine Drugs Market?

The prominent players such as Teva Pharmaceutical Industries Ltd. and Mylan N.V., who generate a sizeable revenue (around 58% market share) through the sales of generic products.

What is the expected CAGR value of benzodiazepine drugs market during the forecast period?

The benzodiazepine drugs market is expected to record a pedestrian CAGR of around 2.7% during the forecast period (2020-2026).