Competency of nano polymers in imaging further broadens the scope of nanotechnology in the diagnosis of cardiovascular disorders, which makes it the present and the future technology of atherosclerosis drugs.

Nanotechnology is adding a new paradigm in the development of atherosclerosis drugs, owing to its selective drug delivery system that only targets damaged tissues. One such nano polymer, E-selectin-targeting polymer, is used for imaging and drug delivery applications to improve the function of heart muscles. 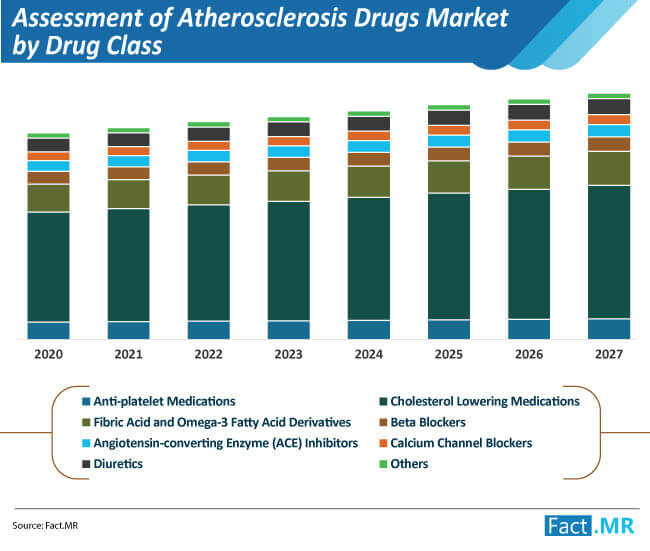 Though technological advancements and demand for drugs are growing at a notable rate, a large number of individuals remain undiagnosed. Low diagnostic rates could hamper the growth potential of the atherosclerosis drugs market during the forecast period (2020-2027).

Hospital pharmacies boast of well-stocked inventory with a wide range of prescribed and OTC medications, which makes it convenient for individuals to makes purchases immediately after diagnosis. Numerous government-held hospital pharmacies offer medications at low rates, which further becomes a viable sales opportunity. 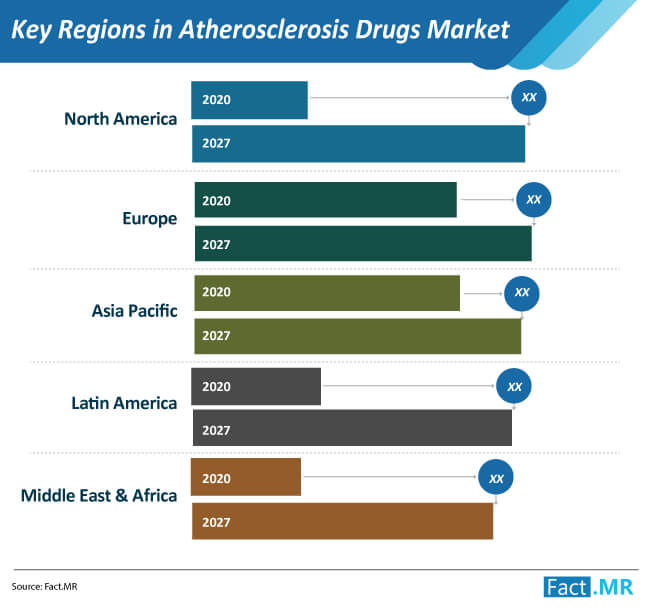 Hospital pharmacies are projected to account for around 46% share in the atherosclerosis drugs market by 2027. However, they could lose market share to retail pharmacies, to some extent, on the back of a large chain of retail pharmacies at key locations, which makes it easy for individuals to refill their drug supplies.

Growing Popularity of Generic Drugs – A Concern for North America, an Opportunity for Asia Pacific

Besides this, initiatives taken by the government to upgrade healthcare infrastructure and increase awareness regarding the treatment of numerous disorders are likely to augment diagnostic and drug adoption rates. On the back of numerous favourable drivers, the North America atherosclerosis drugs market is projected to account for 34% market share by 2027.

Though North America holds a leading position in the global atherosclerosis drugs market, increasing sales of generic drugs are impeding the revenue potential of leading players operating in this region. However, the Asia Pacific atherosclerosis drugs market is thriving on the back of growing sales of generic drugs, as a large number of prominent and emerging players are working towards their development.

In addition, Asia Pacific is a price-sensitive region, wherein, affordability of individuals plays a pivotal role in their purchase decisions. Growing preference for generic drugs over branded ones, in parallel with rising awareness regarding atherosclerosis disorders, would create a conducive environment for market growth during the forecast period.

How Nanotechnology is adding a new paradigm in the development of atherosclerosis drugs?

Nanotechnology is adding a new paradigm in the development of atherosclerosis drugs, owing to its selective drug delivery system that only targets damaged tissues.

Low diagnostic rates could hamper the growth potential of the atherosclerosis drugs market during the forecast period (2020-2027).

Detox Products Market is expected to rise at a 4.6% CAGR by 2031. Sales of detox products through dr...

Demethylase Inhibitor Market is set to witness steady growth by 2030 end. Increase in the demand by ...